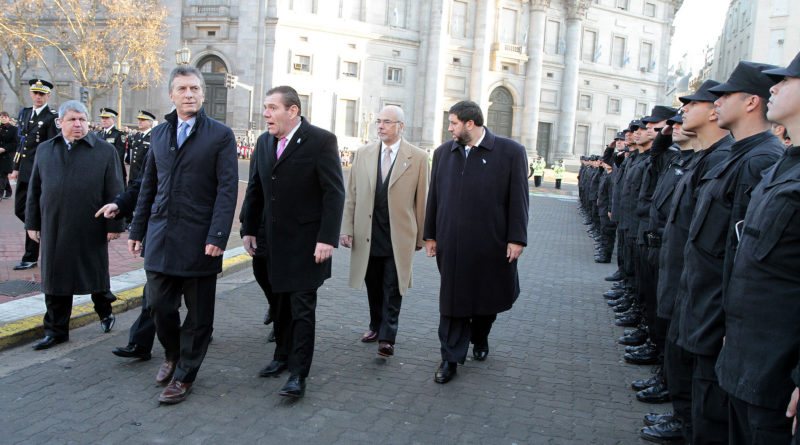 Eight months after taking office, Argentine President Mauricio Macri is still struggling to gain widespread support with the Argentine electorate. After winning a closely contested election on a reform ticket, his efforts to differentiate his platform from that of the previous administration have made him relatively few friends in the opposition. But while international headlines are occupied with his attempts to stabilize Argentina’s economy, they miss an equally delicate issue: the need to address genuine security concerns while simultaneously respecting public opinion and the country’s complex history with the state’s traditional forces. Macri has fallen short in this regard and his single-minded interests overpowered any movement toward consensus; while he has expressed preoccupation over the people’s safety since the campaign trail, his policies have been implemented with little recognition as to how or to what extent they want to be kept safe.

To be sure, there are a variety of situations to be addressed. Porous frontiers with Bolivia and Paraguay permit easy passage for drug and human traffickers, and the former are quietly expanding their operations from transit to production on Argentine soil. Maritime borders are also a flash point, with fishing vessels darting in from international waters to illegally exploit the Argentine Sea and occasionally engaging in firearm pursuits with the Coast Guard. Petty crime is a prevalent and growing problem, with a reported 5,000 cell phones stolen per day.[1] Organized crime organizations with roots in China, Colombia, and Mexico operate out of Argentine cities and periodically leave bodies in the streets after episodes of mafia-style justice. Even under these circumstances, the Macri administration’s tactics have set some disconcerting precedents.

The Police, the Military, and the United States

In a recent hospital visit with the chief of the anti-kidnapping division of the federal police, Macri announced a “paradigm change” in the fight against crime, which involves his government working “elbow-to-elbow with security forces.”[2] Operational changes include increased salaries and promises of modernized technological aid and updated legal adjustments as well, including measures to give police more autonomy in their reactions against protesters.[3] Controversy arose after rubber bullets were used to disband a community group practicing musical numbers for Carnaval and social-political leader Milagro Sala was arrested for disturbing the peace but held while allegations of embezzlement and drug connections are investigated; her ongoing incarceration with apparent lack of due process leads some to consider her a political prisoner. [4][5] A push for increased air security allows for the shoot-down of planes presumed to be carrying drugs and a new system that enables officials to review personal information of airline passengers to Argentina, including with whom they are traveling and what meal they ordered on the flight. [6][7]

Macri has also made overtures to the armed forces after years of distance and mistrust following the 1976-1983 military-government. As with the police, he increased military salaries and autonomy to intervene in civil affairs, with the added slight of dissolving checks and balances that have been in place since Argentina’s return to democracy and extending benefits to officers who participated in human rights violations during the dictatorship. [8][9] The presence of some of these officers in a Macri-officiated parade to honor veterans of the Falklands War (Guerra de las Malvinas in Argentina) as part of Argentina’s recent bicentennial celebration did little to smooth things over.[10]

On the international front, one of the repercussions of the Macri administration has been the renewal of friendly diplomatic ties with Washington. This development, however, has been met with reluctance domestically, as U.S. relations with Argentina are commonly viewed as only producing net benefits for the former (U.S. support for the dictatorship and the reckless policies leading up to Argentina’s 2001 Financial Crisis being recent examples.) The highlight of the reconciliation was a presidential visit from Barack Obama to the Casa Rosada in March, a meeting which was largely framed around expanding trade and loosening visa requirements, but also covered stronger action against drugs, crime, and terrorism, including the installation of a U.S. military base at the southern tip of the country. [11][12]

These sudden and often unilateral changes have spurred a public backlash. Argentina is a country with a strong collective memory when it comes to repression; even those not old enough to remember the last junta will have heard accounts of being “disappeared” or tortured, or seen murals and sidewalk tiles commemorating assassinations that took place in those years. This makes aversion to the limiting of civil liberties in the name of safety all the more powerful, especially when these liberties have only been regained within the last few decades. On the 40th anniversary of the military coup, in which the United States was involved, people flooded the streets to protest Obama’s arrival. In the frequent demonstrations against Macri’s government, one of the most popular protest chants is, “Macri, basura! Sos la dictadura!” (Macri, garbage! You are a dictator!) The historical reference could not be clearer.

For the time being, this is mainly a public relations problem for Macri. As the heir to a business empire turned politician, his image of being distant and out of touch with the average Argentine has been a difficult one to shed. He is not helping himself by ignoring the prevailing sentiment among his constituents and the implications of a recent history of state violence in his country. Continuing to treat security decisions as if they exist in a vacuum could lead to larger problems for him down the road, with unrest growing and speculation already beginning over his chances of reelection in 2019. Given the circumstances of his recent victory he, more than anyone, should recognize how a disaffected populace can lead to political upset.