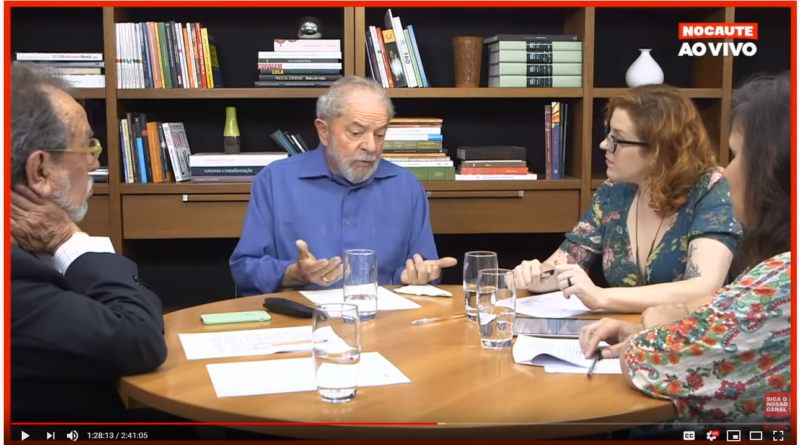 Lula granted this exclusive interview – for the first time since leaving prison on November 8 – to journalists Fernando Morais, Aline Piva (editor at the Council on Hemispheric Affairs, COHA), and Ana Roxo of the Nocaute blog.

“After reading a lot about slavery, I have the thesis that we need to retell the history of Brazil. The true Brazilian heroes are not in the photos. They are anonymous, because they were beheaded, hanged, and did not appear in the pictures,” said the Workers Party (Partido dos Trabalhadores, PT) leader.

Citing riots such as Cabanagem and the resistance of the Palmares Quilombo led by Zumbi and Dandara, Lula stressed that the richness of history has to be told to the youth: “Kids know more about the history of the Russian Revolution than the struggles that were waged here in Brazil”.

“That’s why people say that Brazilians do not like fighting, that we like to reach agreements. They say it because those who fought  before were killed.”, he said.

The former president reaffirmed his insurgent spirit and said that he will travel around the country to fight for the strengthening of the Workers Party, the social struggles, and the Latin American left.

Lula also spoke about the congressional maneuvers against his release after the sentence in second instance, the PT’s next steps, alliances with other progressive parties, the political crisis in South America and the Bolsonaro government’s strategies.

See the main excerpts from the interview:

The PT leader stated that he must go to the streets to reunite the left, which, according to him, is now disheartened. “I don’t know how long I can travel around this country, but I will walk. That’s what I can do: discuss politics with the people and encourage the troops. The troops are demoralized,” he said.

The former president assures that he will face the Bolsonaro government by dialoguing with the people: “Bolsonaro wants to rule with fake news, to lie everywhere; Guedes takes advantage and goes selling off Brazil,  all that was built as the patrimony of the people; and the country is being broken. My role is talking to the people. And don’t ask me for patience with Bolsonaro, Moro, or Dallagnol.”

Lula hopes that the National Congress will be wise in analyzing the maneuvers proposed through Proposals for Amendment of the Constitution (Propostas de Emenda à Constituição, PEC) and bills (Projetos de Lei, PL) that discuss the arrest:

“A Constitution is not a newsletter, a manuscript, something you can rip and throw away all the time. Regrettably, there is a narrow-minded Brazilian elite that now says that the Constitution is obsolete for the country. I hope that Congress has sufficient backbone to not overturn the principles of res judicata”, he said.

“I hope the Supreme Court will have the wisdom of recognizing its role in ensuring compliance with the Constitution and in judging the merits of a case like mine. I’m not asking anyone for a favor. What I want is for this country to return to normality. And to get back to normality, the process against me has to be annulled, and the responsible parties have to be punished.”

Lula said  it is necessary to polarize political discussions so that progressive ideas are propagated and effective. According to him, PT will polarize the next elections to forcefully project its ideas.

“If you don’t want to polarize, don’t have a party. PT was born to polarize. We will polarize in 2022; polarize and win”, he said.

He acknowledged that PT made mistakes, although “more right than wrong”, but stressed again that it is not the party’s role to make self-criticism. “Why do you want PT to do self-criticism? If I do self-criticism, then there is no need for opposition. They ask for self-criticism because they know that no matter how much PT has been wrong, no party has done more for the country than PT; no party has taken care of the people more than PT.”

Lula said the party must prioritize its own candidates in all electoral offices, although he agrees to make alliances with progressive parties in cases such as an electoral runoff, for example.

“I am not against PT supporting Freixo, making alliances in São Paulo, but a party the size of PT has to have its own candidates, even to defend the party’s theses. If PT does not go to the runoff, then it can support a progressive candidate, a candidate  from the left.”

Regarding the break with Lula announced by Ciro Gomes after his release, the former president said he had only gratitude for the former minister of his government. “I am grateful to him for working with me and being loyal. Ciro is not a man of political debate. He is a man of only one truth, that of his own.”

Fake news and the right

Lula acknowledged that the left needs to evolve in the political use of social networks, as the right has massively done.

For him, opposing fake news involves spreading true speech on the street, off the internet. “We have to prepare ourselves to fight lies by saying things in the most serious way possible. It is street speech that can help our people when they go on the internet. One has to have a political message.”

He assured that PT will prioritize the use of the internet in future campaigns. “PT is still crawling. By its size, we should have an almost unbeatable network. But let’s get there. I can tell you it’s a party concern.”

Lula said he has been closely following the politics of governance in neighboring countries. He said that although he is concerned about the US threat, it is good that there is alternation of power, citing the trend change in Argentina with the election of Alberto Fernández.

“There is no party that rules forever. I think it’s good for democracy to have these alternations. It’s important that one day you win and another you lose. What we have to prove is that the right is incompetent in addressing the main problems the country is experiencing, which is the quality of life of its people.”

He said he had doubts about Evo Morales’ fourth mandate in Bolivia. “I didn’t understand why Evo resigned. Maybe he has a motive that I don’t know. Since I don’t understand much of these things, I want to be sure before commenting.”

For Lula, there is a clear interference of the United States in the policies of Latin American countries. “I am convinced that the Americans have decided to make Latin America their backyard again. They don’t want any country here being the protagonist of its own future,” he said. “What is unfortunate is that a country the size of Brazil submits to it,” he added.

Lula was released on November 8, after 580 days in detention at the Federal Police Superintendence in Curitiba.

The release was made possible by the decision of the Supreme Federal Court that ruled that defendants may remain free while they exhaust appeals in criminal cases.

The former president was prosecuted for corruption and money laundering in the case of the Guarujá triplex, with a sentence set by the Supreme Federal Court at 8 years, 10 months and 20 days in prison. There is still a possibility of an appeal.

Lula has another sentence, at first instance, in the case of the Atibaia country house. The punishment in this case is 12 years and 11 months in prison for corruption and money laundering.