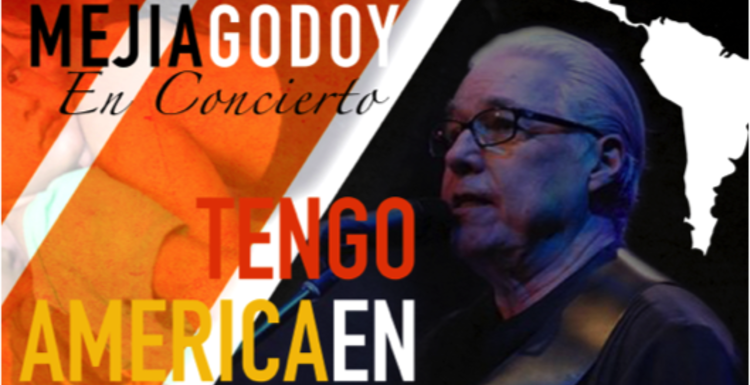 By: Frederick B. Mills, Senior Fellow at Council on Hemispheric Affairs

On November 14, 2014, La Red Nacional Salvadoreña en El Exterior (RENASE, the Salvadoran National Network in the Exterior) hosts one of the great emissaries of popular Latin American culture, Nicaraguan singer, Luis Enrique Mejia Godoy. Godoy will perform at the Civic Building—Veterans Plaza in Silver Spring, Maryland. The theme of the concert is “I have America in my Voice.”

Luis Enrique’s music and song brings together Indigenous Central American, Afro-descendent, and Caribbean traditions in a way that speaks to the struggle for social and economic justice throughout the Americas. The November performance will bring the profoundly humanistic message of Godoy to the US at a time of growing economic inequality and in the midst of the most sustained attack on Latin American immigrant rights to be witnessed in recent U.S. history.

Luis Enrique has recorded 22 albums both as soloist and with the group Mancotal and Tierra Fertil. He has composed and recorded, together with his brother Carlos, numerous songs, including: Guitarra Armada (1979), la Cantata al General Sandino (1981) and Canto Epico al FSLN. They have also put the lyrics of many Latin American poets to music, giving them yet another life among the pueblo. The Godoy brothers have received a number of prestigious awards for their musical accomplishments, including the Orden Cultural Rubén Darío (2006).

Luis Enrique’s songs are immediately relevant to Central American immigrants living in the U.S. Many of those who came in the late 1970’s and throughout the 80’s will remember the trials of civil war in their homelands and how the songs of the Godoy brothers conveyed solidarity and hope. Godoy’s music will likely also touch on more recent arrivals from the “Northern Triangle,” many of them children and youth seeking to reunite with their families and/or to escape from gang violence and economic insecurity.

Luis Enrique, and his brother Carlos, have been bringing hope and inspiration to a broad audience for more than 45 years because they address not only socio-economic issues, but love and nostalgia for the homeland, its customs, sights, tastes, and smells. Of course it is not Godoys’ alone who speak through their music, but the voice of popular aspirations for a better life. Luis Enrique and Carlos’s message is but part of a beautiful gift for those who recognize our common humanity.

A brief sampling of the Godoys’ lyrics shows their close association with lived experience. In the aftermath of the Sandinista revolution in Nicaragua (1979), Luis Enrique’s sang Josefana, celebrates the wake of the 1980 literacy campaign that drew thousands of students to the country side to help in the battle to eliminate illiteracy.

[“Very early in the morning they go to plant the seed of learning and teaching…with their eyes on the future they go singing.”]

The Sandinista victory also inspired revolutionary Salvadorans who sought to challenge oppressive oligarchic forces in order to bring about real structural change in El Salvador. In Soy de un pueblo sencillo, Godoy relates the struggle for liberation of the people of Nicaragua to all who seek justice.

[“I am from a pueblo born amidst the rifle and song, that has suffered greatly and has much to teach, brother to so many pueblos that have wanted to bring about change because they know that though small, together we are a volcano.”]

This volcano was certainly irrupting in the rebellion in El Salvador in the late seventies and the 1980’s, as it had in 1932. By singing songs like La Sombra Azul and Con Farabundo y Romero during the civil war in El Salvador, Luis Enrique, along with Salvadoran popular musicians and singers, gave inspiration to the Salvadoran resistance.

Popular music had the power of inspiring the hope that just as Nicaragua had been able to throw off dictatorship, so too could El Salvador.

[“With Sandino and Guevara, with Farabundo and Romero, with the voice of Victor Jara that is of the entire continent, we are a volcano irrupting with a fury that will last until the oppressed people can sing of peace. Yesterday I suffered the song for my bloodied people. Today I suffer for my brother: El Salvador tortured. But the scoundrels will know that the struggle is not over, that the triumph of Nicaragua is also that of Latin America.”]

By 1992 the civil war in El Salvador, which had cost the lives of over 70,000 non-combatants, had ended in a negotiated settlement. Luis Enrique has since visited El Salvador on a number of occasions to continue sharing themes of solidarity, hope, and the celebration of culture. At a Festival of Truth in El Salvador, he sang “Where are the Children of the War,” referring to the children who were abducted by the security forces during the civil war and for whom there continues to be a relentless worldwide search to find them. The lyrics are haunting:

[“Where are the children of the war? Who will hold vigil over their dreams and their lives? Who will tell them where their country is? Who will sing the songs of their cradle? Who will speak of their nest destroyed. Who will read the lines on their hands? Where will the memories of their infancy enter, perhaps lost in an obscure corner?”]

While Luis Enrique and Carlos address the big issues of the liberation of oppressed peoples, they also pay attention to the more sectorial struggles of women’s rights, AIDS prevention, the rights of Indigenous peoples, the poor and the working class. Some of the Godoys’ work also contain playful themes and folklore that reflects everyday life in Central America and the Caribbean. Perhaps the songs that evoke nostalgia will have a special impact for the transnational Central Americans living in the exterior. In Nicaragua Nicaraguita and Volvere a mi pueblo, one hears the love of country and the desire to return.

The brothers Godoy stand among a revered tradition of Latin American popular musicians such as Victor Jara, Ali Primera, and Mercedes Sosa who have given voice to those seeking to build a new world. We can expect that on November 14, in Silver Spring, Luis Enrique will once again inspire and give hope to those who believe that all human beings ought to be able to live and develop their full potential.

An earlier version of the essay was published by MetroLatino USA: http://metrolatinousa.com/2014/11/06/luis-enrique-mejia-godoy-maryland/

For those interested in attending to this concert, the area is easily accessible by metro. The closest metro stop is Silver Spring.

Full disclosure: the author is a member of RENASE.