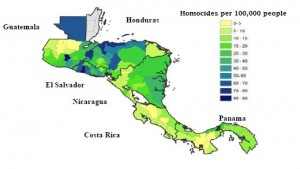 Taxation – who pays, how much they spend, and where this revenue goes – is a contentious issue in Latin America. Governments collect imposts from their citizens, and in return, the state is expected to invest prudently in education, health, and security programs that benefit society. In Central America, the taxation-governance nexus between the people and the state chronically falls short of implied expectations. Tax revenue comes in at a notoriously low level. Consequentially, Central American states routinely have limited funds to combat the security threat posed by the rapidly expanding Mexican drug wars.

Indisputably, Central American tax policies are highly ineffective at harvesting revenue. In the “Northern Triangle,” comprised of El Salvador, Guatemala, and Honduras, tax revenue as a percentage of GDP was a mere 13.53 percent in 2010. Conversely, Chile and the U.S. respectively had tax takes of 18.6 percent and 26.9 percent in the same year. Tax evasion throughout Central America is predictable and further compounds this dilemma. In the words of ombudsman Ofelia Taitelbaum, “tax evasion is the national sport” in Costa Rica. Even more troubling is the regressive nature of Central American tax code, which favors wealthier citizens over the less fortunate. Most taxes are indirect Valued Added Taxes (VAT) on goods purchased rather direct taxes on income, property, and capital. In Nicaragua, “a Miskito Indian who buys rubber boots on the Río Coco in the Atlantic Coast pays the same 15% [VAT as] a professional who buys stylish shoes in a fashionable Managua store.”

As Mexican drug wars radiate southward, Central American nations do not have the financial resources necessary to combat the resultant security crisis. The Northern Triangle is a particularly grisly place; Guatemala, El Salvador and Honduras have respective homicide rates of approximately 46, 61 and 68 murders per 100,000 people. In contrast, while the U.S.’s 2009 homicide rate was 5 murders per 100,000 people, that same year Central America had an average homicide rate of 45, rendering the region the most violent place on the planet.

The combination of inadequate tax revenues and escalating violence in Central America produces a deadly brew that causes the state to become largely irrelevant for the wealthy and the indigent alike. The upper classes of Central America are increasingly turning to the private sector to meet their security needs. For example, in Honduras and Guatemala, there are four to five times as many private security guards as there are policemen or soldiers. Conversely, impoverished Central Americans must often mix with dubious sub-state actors to gain access to basic social services. The inhabitants of the San Salvadoran neighborhood La Victoria, for example, must pay the street gang Mara Salvatrucha to gain access to water lines or refurbish their community hall.

Certainly, tax reform will not prove to be a panacea for the security crisis afflicting the Central American isthmus – but it will be a necessary step in the right direction. According to U.S. Secretary of State Hillary Clinton, in Central America, “There are still too few people of means paying their fair share of taxes to their government in order to support services for those who will otherwise be mired in generational poverty.” Popular or not, reasonable taxation rates can cement the bond between conscientious citizens and legitimate governments, and protect the most defenseless members of society. For Central American governments to have even the slightest chance of mitigating drug-related violence, they must find a way to raise tax revenue – this would be one way of augmenting state security programs in order to protect society from lawless factions.

This is the third issue in a four part series on the narcotics trade that discusses the industry from a variety of different angles.