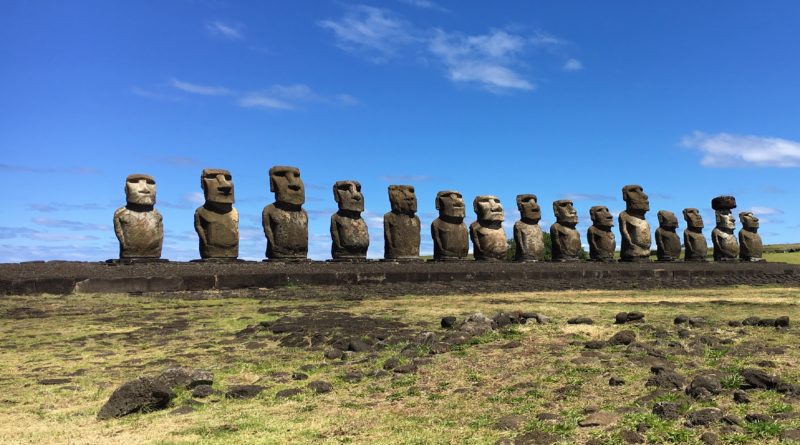 Rapa Nui (Easter Island) is renowned worldwide for its enormous volcanic statues, called moai, which resemble human heads. Less well-known is its significant indigenous population, the rapa nui, which have called this south Pacific island home for over a thousand years. This piece will refer to the island as Rapa Nui and the indigenous population as rapa nui, per the recommendations of the Consejo Nacional de la Cultura y Las Artes.[i] The rapa nui lost sovereignty of their island many years ago, when Chile annexed the island in 1888. In recent years, the rapa nui have become increasingly concerned over Chilean migration to their small island. In 2012, Rapa Nui’s mayor asserted that Chileans have begun to outnumber the indigenous locals on the island,[ii] and while the statistics vary, other estimates find that 40 percent of the island’s population is mainland Chilean.[iii] Today, many rapa nui contest the legality of the 1888 treaty that bound their island to Chile.[iv] Just this past week, the rapa nui achieved a significant victory: the commencement of Senate debate on a law that will limit migration to the island.[v]

The annexation of Rapa Nui is a complex and enraging tale. Its initial annexation was orchestrated by a Chilean navy officer, Policarpo Toro Hurtado, who travelled to the island with twenty Chileans and some French sheep in 1888.[vi] These sheep proved to be an invasive species to the island: during my brief stay on Rapa Nui in 2016, natives frequently expressed the destruction caused by sheep to the island’s topography, pointing to the lack of trees and diverse vegetation. Unfortunately, the same might be said about the people who accompanied them. In a tale that eerily mirrors the murder of the Incan emperor Atahualpa at the hand of Francisco Pizarro, Enrique Merlet, a businessman who held farming interests on the island, ordered the death of the Rapa Nui king, Simeon Riro ‘a Kainga Rokoro He Tau.[vii]

The oppression of the Rapa Nui seems even more senseless when one considers that Chile has not always expressed a strong desire to maintain the island territory. During a period of economic stress in the late 1930s, Chile offered to sell Rapa Nui to whomever offered the largest sum, either Germany, England, the United States, or Japan.[viii] Scholar Grant McCall refers to Chile’s treatment of Rapa Nui as an “ambivalence,” claiming that Chile then and now is unsure of how best to approach ownership of the island.[ix] He believes that for Chile, this acquisition was a “mistake” as Chile had “no practical use for [Rapa Nui] and, particularly in the 19th century, had several ranches many times the size of [Rapa Nui] on its own mainland.”[x]

The 21st century has witnessed the indigenous islanders take a bolder stance on their sovereignty over the territory. In 2009, members of the rapa nui community blocked travel out of the island’s only airport in protest of Chilean migration.[xi] As a result, Patricio Rosende, Chilean Undersecretary for the Interior, approved new legal framework, crafted in part by the rapa nui, to require that each visitor document his or her trip to the island.[xii] However, the Chilean Supreme Court decided that, as the island is a possession of Chile, Chilean citizens should not be required to complete such paperwork.[xiii] This ruling did little to discourage the rapa nui who later that year held a referendum on whether to modify the Chilean constitution to limit migration from the mainland.[xiv] 96.3 percent of the rapa nui population voted for the modification.[xv] It now falls to the Chilean Senate to follow the will of the rapa nui, a people who have been marginalized and mistreated for too long. If passed, this will not be the first measure of its kind. Ecuador has imposed restrictions on their citizens’ migration to the Galapagos Islands, an Ecuadorian province.[xvi] Chilean Senator, Eva Von Baer, has highlighted how this law could be a launching point for protecting other Chilean regions affected by an increasingly heavy human footprint; Von Baer referred to Torres del Paine, Chile’s stunning southern region.[xvii]

It is difficult to imagine a flight from Santiago, Chile to Hanga Roa, Rapa Nui as domestic. The cultural bonds felt between the rapa nui, who in my travels, could point and identify nephews and third-cousins alike, do not extend to Chileans. The Chileans I met regarded the rapa nui with admiration and intrigue. Their mesmerism with this insular indigenous culture contrasted with their rejection of the mainland Mapuche is a disturbing paradox. This being said, it is overdue that the Chileans move beyond mere fascination with the rapa nui and actually act in their best interests. Requiring airline passengers to purchase round-trip tickets is hardly an outrageous imposition, and would allow rapa nui to know duration of stay of non-indigenous visitors.[xviii] Also, considering the harm invasive species (plants, animals, and humans) have inflicted on the island in the past, visitor declarations should become mandatory. Hopefully, the Chilean Senate will be able to pass constitutional legislation regarding visitation to the island amenable to the Supreme Court. The people of Rapa Nui will sleep easier knowing Chilean migration has been tempered.