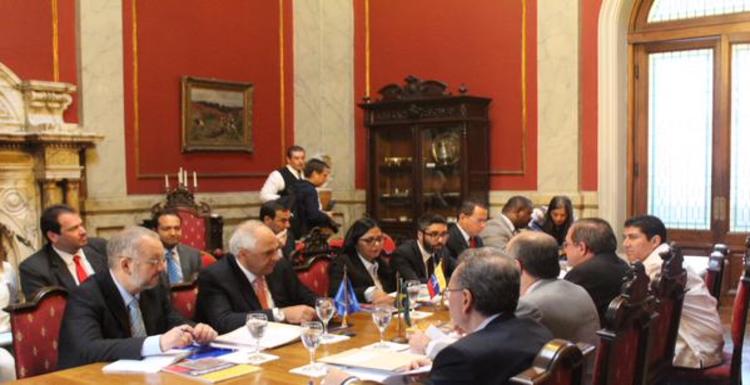 A special commission of the two largest associations of Latin American nations, CELAC (which includes all of the Latin America and the Caribbean) and UNASUR (which represents South American countries) met today in Montevideo, Uruguay, to analyze the relationship between the United States and Venezuela as well as the situation inside Venezuela. The commission, which has been convened at the request of the President of Venezuela, Nicolas Maduro, includes the foreign ministers Delcy Rodríguez (Venezuela), Ricardo Patiño (Ecuador), María Ángela Holguín (Colombia) and Mauro Vieira (Brazil), as well as the Secretary General of UNASUR, Ernesto Samper.

Early indications are that this broad based association is calling for the U.S. to cease interference in the internal affairs of Venezuela; for Caracas to resume a dialogue inside Venezuela; as well as for the commencement of a U.S.–Venezuela dialogue. This call is only the latest in a series of statements of solidarity with Caracas and the rejection of U.S. meddling in the internal affairs of member states issued by regional political and economic associations as well as social movements.

In an interview with the author on February 9, 2015, Director of the Council on Hemispheric Affairs, Larry Birns, observes:

“Washington is basically being berated by Latin America for its campaign to pressure and to otherwise weigh-in against the region’s sovereignty and its inalienable right to conduct its own economic and political policies according to its own writ. It appears that Washington believes it can carve away, in silence, the rest of Latin America, including Cuba, from Venezuela. But the statements coming out of UNASUR and CELAC should serve as a strong reminder that Latin American unity remains intact.”

The UNASUR commission has convened at a time of increasing U.S. belligerency towards the Maduro administration in the form of sanctions, unsubstantiated attempts to criminalize and delegitimize the government, and increases in soft power funding to opposition groups inside Venezuela. On February 3, 2015, in response to the expanded sanctions imposed by Washington against Caracas, the Venezuelan Foreign Ministry released a statement that read:  “The Government of the Bolivarian Republic of Venezuela deplores the continued attacks by the Government of the United States” that “continue violating the principles of national sovereignty, equal rights and non-interference in the internal affairs inherent in international law” (Telesur). There is a sense of urgency within the Chavista camp, that in the face of a divided opposition the role of foreign interference on behalf of the counter revolution may be stepped up to fill the gap. Venezuela, however, is not alone.

At a meeting between President Maduro and Secretary General of UNASUR, Ernesto Samper, on February 4, 2015, in the Miraflores presidential palace, on the heels of expanded U.S. sanctions (February 2), Samper, expressed the solidarity of member states in the face of Washington’s bellicose posture towards the Venezuelan government:

“I want to reiterate publicly that the position of UNASUR that is in its charter…is absolutely clear and unequivocal in pointing out that any attempt at destabilization that is brought about against a democracy or attempt to destabilize a government can count on the unanimous rejection of the countries of the South.”

At today’s meeting in Montevideo, Foreign Minister of Ecuador Ricardo Patiño voiced a similar position on behalf of the commission, “We want to avoid a situation where extra-regional countries are able to affect the peace and stability of our member states.” Patiño also insisted that it is “absolutely illegal for the U.S. to impose and activate new sanctions against officials of the Venezuelan government.”

The commission’s discussions include concerns that Washington’s attack against Venezuela would be perceived as giving the green light to the more violent elements of the Venezuelan opposition. There was also a comparison made between the mounting assault on the state from both inside and outside the country and the events preceding the short lived coup of 2002 against then President Chavez.

The UNASUR commission meeting comes one year after the so called “exit now” strategy was waged by elements of the U.S. backed opposition. The “exit now” campaign aimed at the possibility of regime change and led to violent street demonstrations in some middle and upper class neighborhoods. Public opinion polls in Venezuela conducted at the time showed that such tactics have been rejected by the large majority of Venezuelans, across the political spectrum, who prefer democratic procedures as the means for determining political contests.

The UNASUR meeting is also being held just months before parliamentary elections in Venezuela that will determine to a large extent the future direction of political and economic policies of the country. Foreign interference is not conducive to this electoral process; the parliamentary elections are an important ingredient in democratic self-determination.

The Maduro administration has been under tremendous pressure to overcome serious consumer product shortages, bring inflation under control, and address the erosion of salaries in the face of currency devaluation. These problems are exacerbated by the fall in oil prices that dramatically has reduced Venezuela’s export income. Maduro has been working tirelessly to shore up Venezuela’s economic position by his trip in January 2015 to OPEC countries and increasing commercial ties with China as well as the stepped up enforcement of anti-hoarding laws and calls for the acceleration of domestic agricultural production.

As Camacaro, Mills, and others have argued, the shortages are in large part the result of an economic war being engineered by some key elements of the business sector that would like to see the Bolivarian socialist project come to a definitive end, as well as the actions of speculators who are diverting products from store shelves into warehouses or transporting goods into Colombia where they fetch much higher prices than governmental legal prices.

As Maduro pushes back against hoarding and speculation and commits to the continuation of the social missions that have been implemented since they were introduced by Chavez a decade earlier, a divided opposition, as one can deduce from the Fedecamaras (Venezuelan Chambers of Commerce) position, is pushing for market oriented reforms, including the removal of price controls on certain basic goods, the repeal of some provisions of pro-labor legislation, and an increase in the provision of divisas (dollars for use in importation) at preferential exchange rates. Maduro, however, is holding firm to the legacy of Chavez in advancing the socialist project, though he also gets flack from the Chavista left who sometimes charge him with moving too slowly in this direction.

The U.S. support for the counter revolution in Venezuela has regional implications because the Bolivarian revolution is not confined to Venezuela. It is a continental movement with a more than 200 year old heritage of resistance to dehumanization, the encomienda system of servitude, and dictatorships and client states that served oligarchic interests. In some areas of the region the cause of independence requires resistance to the attempt to reimpose, by extra constitutional means, the neoliberal regime.

During the third CELAC summit at the end of January 2015, member states articulated a policy of unity with regard to establishing a zone of peace with mutual respect and cooperation, regardless of political differences, among nations. The U.S., however, which is not a member of CELAC or UNASUR, has hardly adopted the same posture.

By not adapting to the new epoch of regional independence from the hegemony of any power block on the planet, Washington’s opening to Cuba arguably signaled not an end to U.S. hegemony in the region, but a step towards attempting to advance its rehabilitation, as the very next day the Obama administration signed into law sanctions against Venezuela. In what may prove to be a stumbling block in efforts to normalize relations with Havana, Washington has also refused to entertain any discussion of closing the Guantanamo military base and returning it to the jurisdiction of Cuba. The Obama administration’s belligerent stance towards nations that do not conform to the eroding Washington Consensus is out of sync with growing Latin American solidarity around the principles of self determination, sovereignty, independence, integration, social justice, and promoting a multi-polar world.

The U.S. does not engage more constructively with its hemispheric neighbors arguably because Washington too faithfully represents transnational corporate interests. The Obama Administration’s interference in the internal affairs of CELAC member states that do not obey those interests only deepens the alienation of social movements and states in Latin America from the North. By insisting on U.S. “exceptionalism” in the 2015 National Security Strategy, it appears that the U.S. will tolerate only one economic and political model in its “backyard,” the one that conforms to the global neoliberal order, even as that order is being called into question by those who have the most to lose from its perpetuation, the 99 percent, dwelling from Athens to Caracas.