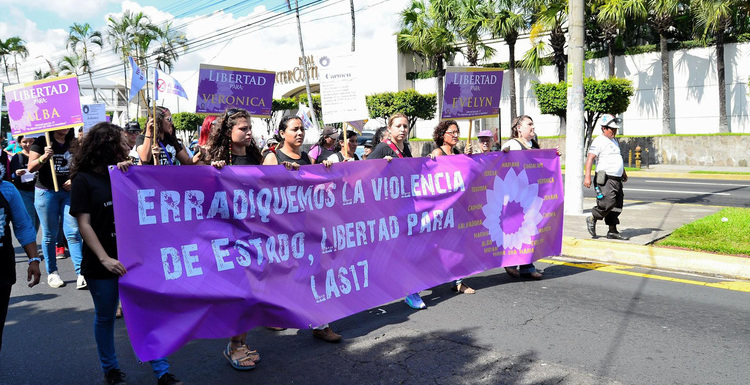 By: Kate Sopcich, Research Associate at the Council on Hemispheric Affairs.

Eight years ago, Carmen Guadalupe Vásquez Aldana, an 18-year old mother of one, suffered a miscarriage. Guadalupe, working as a domestic servant in the home of a wealthy Salvadoran family, collapsed and was rushed to a public hospital. As required by law, attending doctors notified the police; Guadalupe was arrested and charged with murder.

Guadalupe’s case is similar to that of fifteen other young women in El Salvador who currently face long-term prison sentences for unintentional miscarriages.1 The plight of these women lies at the convergence of religion and law. In strict compliance with Catholic doctrine, all forms of abortion are illegal in El Salvador, and miscarriage is legally regarded as abortion.

The Salvadoran Penal Code had not always been so punitive. From 1973 until 1992, therapeutic abortion—the termination of a pregnancy in the event that the mother’s life is at risk, the fetus is unviable, or in the case of rape—had actually been legal. But when the Peace Treaties signed between the Salvadoran government and the Farabundo Martí National Liberation Front (FMLN) ended the civil war in 1991, institutional change provoked constitutional reform, and regressive amendments were added which banned all forms of abortion.2

Along with the new constitution, the Salvadoran government established Ciudad la Mujer, a program that aims to represent the “fundamental” rights of women. But while Ciudad offers services to address reproductive health, gender violence, and female economic empowerment, the organization all too often functions to reinforce the traditional Catholic view of women as mothers and wives.3 Despite its guise as an advocate for women’s rights, Ciudad is of little help in the case of Guadalupe and her 15 comrades.

Salvadoran feminist and advocacy groups have stepped in to carry the fight forward. The organization Agrupación Ciudadana por la Despenalización del Aborto Terapéutico Ético y Eugenésico (Citizen’s Group for the Decriminalization of Ethic and Eugenic Therapeutic Abortion) has denounced the current laws, pointing out that, “the absolute criminalization of abortion has huge consequences for the lives of women.”4 Agrupación Ciudadana has pledged “to promote citizen’s consciousness to change the existing legislation on the interruption of pregnancy,” “to legally defend the women who have been condemned or are being accused of abortion and other related crimes,” and “to [emphasize] … the necessity that women receive adequate assistance to ensure sexual and reproductive health so that unsafe abortions do not occur.”5

Ultimate hope for the progression of Salvadoran women’s rights lies with the progressive FMLN party. With the advantage of 31 congressional seats, the party enjoys political legitimacy. Furthermore, it openly supports measures to decriminalize therapeutic abortion. Current Minister of Health, Dr. Elvia Violeta Menjívar, is an FMLN party member who has advocated for progressive reproductive policy throughout her political career.

After Guadalupe already served roughly a third of her prison sentence on charges of murder, Congress held a vote to determine the possibility of her being granted a pardon as petitioned by high officials of the aforementioned FMLN party. The vote took place at a legislative assembly on January 16, 2015, held in commemoration of the 23rd anniversary of the Peace Treaties signed between the El Salvadoran government and the FMLN that ended the country’s civil-war. Various deputies of the National Assembly and political leaders spoke on themes of transforming the country’s democratic development and in defense of human rights.6 It was with a hint of irony that the national legislative body would later vote in one of its sessions to deny Guadalupe of her innocence. Despite attracting 42 votes, the Guadalupe legislation remained one vote shy of ratification.7

Five days following the initial ruling on January 21, 2015, the Salvadoran congressional body recast its vote regarding the petition for Guadalupe’s pardon. The measure passed with 43 to 41 votes in favor of granting a pardon to Guadalupe, successfully lifting further criminal punishment for her miscarriage. Honoring the petition, the Salvadoran Supreme Court determined there to be “judicial error” in the original verdict regarding Guadalupe’s case.8 Although this victory is a cause of celebration, it is important to remember that 15 Salvadoran women remain incarcerated for unintentional miscarriage.

Chile, the Dominican Republic, Haiti, Honduras, Nicaragua, and Suriname are the only other remaining countries in the Western Hemisphere that maintain the illegality of abortion under all circumstances.9 However, the status of reproductive rights in El Salvador remains uniquely oppressive when compared to these other hemispheric countries. Whereas Chile is currently progressing towards decriminalizing therapeutic abortion, El Salvador still legally considers miscarriage to be murder, even if polls show that the majority of the population is in favor of therapeutic abortion.10

Miscarriage is a tragedy that occurs naturally and that women have had to endure since the beginning of time; viewing it as murder demonstrates an abhorrent understanding of female reproductive health. Prevalent Catholic beliefs fused with deeply rooted conservative values coincide with grave misconceptions regarding female health and sexuality in El Salvador, ultimately resulting in a devastating concoction that sanctions the continued imprisonment of these wrongfully accused women. However, the grave situation in the country is turning as the recent pardon granted to Guadalupe shines a beacon of hope for international and Salvadoran activists who will continue to pursue justice in the fight for reproductive rights.

By: Kate Sopcich, Research Associate at the Council on Hemispheric Affairs.

2 “On the Brink of Death: Violence Against Women and the Abortion Ban in El Salvador.” Amnesty International. Published September, 2014. http://www.amnestyusa.org/sites/default/files/on_the_brink_of_death.pdf.

7 Rogers, Tim. “Teen Sentenced to 30 Years in Jail for Having a Miscarriage Could be Pardoned in El Salvador.” Fusion. http://fusion.net/story/38969/teen-sentenced-to-30-years-in-jail-for-having-a-miscarriage-could-be-pardoned-in-el-salvador/.

9 “In Brief: Facts on Abortion in Latin America and the Caribbean.” Guttmacher Institute. Published January, 2012. http://www.guttmacher.org/pubs/IB_AWW-Latin-America.pdf.