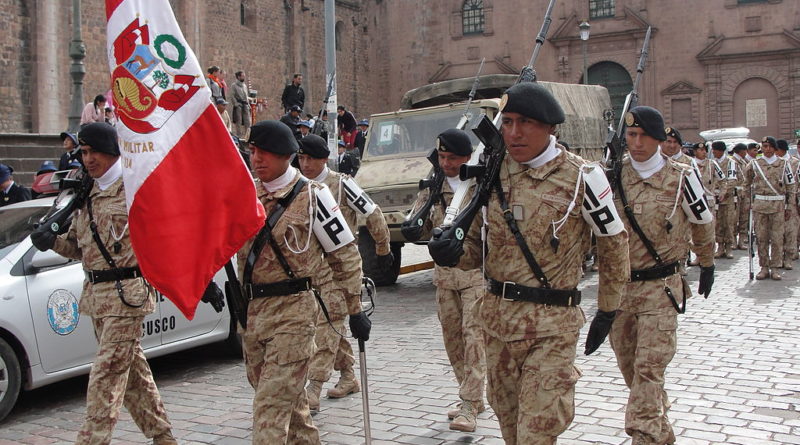 After a 31-year wait, the individuals responsible for the 1985 massacre of 69 men, women, and children in Accomarca, Peru have finally been brought to justice. On September 1, ten former members of the Peruvian Armed Forces received between 10 and 25 years in prison and were ordered to pay thousands of dollars in civil reparations for their role in the atrocity.[i] Those convicted include not only the lieutenants present the night of the raid—Telmo Hurtado (23 year sentence) and Juan Rivera Rondón (24 years)—but also the military brass—General Wilfredo Mori, Colonel Nelson Gonzales, and Colonel Carlos Medina (25 years each)—who organized the Huancayoc Operations Plan named after the neighborhood where they expected to find members of the leftist guerilla group, Sendero Luminoso (Shining Path – SL).[ii] Five other soldiers were condemned to 10 years behind bars.  In addition to jail time, the Sala Penal Nacional, a court specialized in trying terrorism and other crimes against humanity, ordered those responsible to pay S/150,000 Soles ($44,000 USD) to every survivor and immediate family member of the victims including 189 orphaned children.[iii] [iv] [v]

After a 6-year trial, which included over 250 sessions, the verdict stands out both as a rare conviction of high-ranking officers and for its decision to award substantial economic reparations.[vi]

On August 14, 1985, following information provided by a captured SL member, two patrols of the Second Infantry Division’s “Lince” Company entered the Huancayoc neighborhood of Accomarca, a town in the Vilcashuamán Province of Ayacucho. After a fruitless search for arms, ammunition, or propaganda, the two-dozen soldiers then gathered the community and raped the women. Next, dozens of residents were crowded into a single house and summarily executed. The house was then burned, leaving the remains unidentifiable. The massacre was followed by a series of cover-up killings, including that of an 80-year-old witness.[vii]

The above details, recorded in Peru’s Truth and Reconciliation Committee’s (CVR) 2003 report, are almost identical to those that appeared in the Council on Hemispheric Affairs’ (COHA) 1985 year-end Report on Human Rights. In a stark reminder of the severe condition of human rights to be found in Peru and the entire hemisphere, COHA actually gave the Andean republic a “most improved nod.”[viii] Elected that year, President Alan Garcia had promised to “not allow the use of extra-judicial methods in the struggle against subversion.”[ix] In the aftermath of Accomarca, Garcia forced the resignation of the Chief of the Armed Forces, Cesar Praelli, as well as the two generals in command of the Ayacucho zone. However, at the end of 1985, just four soldiers had been charged in the case, which remained under military jurisdiction.[x]

In 1987, those implicated in the Accomarca Massacre were acquitted with the exception of Telmo Hurtado who received just four years in prison for “abuse of authority.” After further review, a 1992 verdict prescribed a similar punishment.[xi]  In 1995, Hurtado, along with numerous other war criminals, took advantage of President Alberto Fujimori’s amnesty law, which conceded “general amnesty to military personnel who were condemned for military or common crimes as a consequence of the fight against terrorism.”[xii] The law meant that any soldier convicted for crimes committed during military operations since 1980 was set free.

The Accomarca Massacre returned to the public eye in 2003, with the release of the CVR’s final report. This document provided strong evidence implicating military brass in the atrocity.  It was revealed that General Wilfredo Mori had commanded leaders of the Second Infantry Division to “capture and/or destroy terrorist elements existing in the Huancayoc neighborhood.” In planning meetings, officers confirmed that all peasants encountered could be assumed to be terrorists. After the attack, Mori ordered the area “cleaned” before the arrival of congressional investigators.[xiii] The CVR contextualized the massacre as part of a larger military strategy that utilized “extrajudicial killings, forced disappearances, and torture” to combat terrorism.[xiv] It concluded that the atrocity “was not the work of a single person… [but rather] was perpetrated by an organized power apparatus.”[xv]

At the trial, Mori claimed it was not possible for him to control all of the dispersed patrols under his command.[xvi] But, while not directly responsible for the massacre, the orders of Mori and other officers authorized excessive force, implied a presumption of guilt, and attempted to cover-up the incident. These orders, corroborated by Hurtado’s testimony, were essential in securing the convictions.[xvii] The verdict brings the number of ex-militants convicted of crimes committed during the 20-year internal conflict to 70.[xviii]

Individual economic payments are a more transparent form of reparation. Since 2012, the first year it received funding, Peru’s individual economic reparations program has expanded rapidly. To date, the government has outlaid $75 million USD surpassing the amount spent on collective efforts. The focus, however, has been on reaching as many victims as possible instead of awarding sums that could actually change lives. With 77,000 beneficiaries, the program has only spent about $1,000 USD per person with the larger payments reaching $4,000 USD.[xxii]

Of course, awarding $44,000 USD to every person affected by the conflict would be impossible. Even in the case of Accomarca full payment is unlikely, as the perpetrators are expected to foot a ridiculous bill. Nonetheless, just mentioning such a sum is symbolic. In a region where average annual income is just $3,000, the reparations mandated represent a genuine attempt to lift the descendants of Accomarca from their historical poverty.[xxiii]

The sentencing of those responsible for the Accomarca Massacre is a reminder that, even decades after the worst years of the Cold War, the search for justice continues. Courts throughout Latin America should follow Peru’s lead by prosecuting high-ranking officers and mandating impactful reparation packages. If justice is to arrive so tardily, it should be well worth the wait.