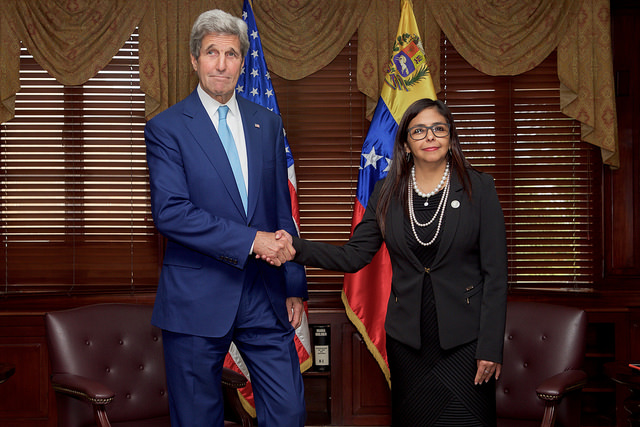 U.S. Secretary of State John Kerry made the unexpected move yesterday of agreeing to a direct, bilateral dialogue with Venezuela in order to reestablish full diplomatic relations. Kerry met with Venezuelan Foreign Minister Delcy Rodriguez during a gathering of the OAS General Assembly, that has been taking place in the Dominican Republic this week, to discuss how to forge a less confrontational relationship between the two countries in the future. The State Department said in a statement released yesterday that the meeting is intended to be the beginning of a process for “establishing a positive path forward in the bilateral relationship.”[1] Striking an unlikely image, the pair were pictured shaking hands in front of their respective countries’ flags at the Chancellery building in Santo Domingo, the Caribbean nation’s capital city.[2]  Venezuelan President Nicolás Maduro welcomed the offer of relations based on mutual respect and responded by calling for an exchange of ambassadors. Kerry has appointed veteran ambassador Thomas Shannon to oversee the dialogue and develop a diplomatic strategy going forward.

Perhaps most surprisingly of all, Kerry also distanced the United States from attempts by the Secretary-General of the Organization of American States, Luis Almagro, to invoke the OAS’s Inter-American Democratic Charter against Maduro’s government. He stated: “At this moment, I think it’s more constructive to have dialogue than to isolate.” Such sentiments come at a time of growing confrontation between the interventionist course pursued by Almagro and the insistence on national sovereignty by the Maduro administration. Kerry’s remarks represent the United States’ increasing acknowledgement of the rejection of Almagro’s stance by the region’s leaders and reflect a dampening of support for his aggressive posturing. Earlier this month an OAS meeting to discuss the possibility of invoking the Charter against Venezuela led to a unanimous declaration denouncing intervention and a rejection of applying the Charter from all but one of the countries’ representative in attendance.

COHA delivered a letter on behalf of a coalition of organizations to Almagro on the day of the meeting expressing concerns that he was attempting to misuse the Charter to provide a justification for an intervention to oust the democratically-elected Maduro government on partisan and imperialistic grounds. The mood at this week’s OAS meeting seems to have been similar; in addition to a powerful defense of Venezuela from Rodriguez, some even called for Almagro’s resignation as head of the 35-member body.

Kerry furthermore lent his support to the dialogue between the Maduro government and the Venezuelan opposition to address the country’s ongoing economic crisis, which is an effort of UNASUR being facilitated by former Spanish Prime Minister Jose Luis Rodríguez Zapatero, former Dominican President Leonel Fernandez, and former Panamanian President Martin Torrijos. According to a statement released by the State Department, Kerry “reiterated that the United States supports political dialogue and peaceful, democratic solutions‎ and reaffirmed that any U.S. involvement‎ would only be in support of an agreed-upon Venezuelan solution consistent with constitutional principles.”[3]

In placing dialogue above interventionism and isolation, the repositioning delivers a significant blow to the Venezuelan opposition, which has been lobbying hard for the Charter to be used in the hope that it will lay the groundwork for a “humanitarian” intervention as one among other strategies underway for removing President Maduro from office. Opposition spokesman and former presidential candidate Henrique Capriles Radonski has been travelling across the region to build backroom support for intervention including trips to meet with the new right-wing governments of Argentina and Brazil. In spite of the apparently friendlier political environment in these countries, Capriles was met with demonstrations against his visit to Argentina.[4] The meeting between Kerry and Rodriguez can only serve to further throw a wrench into his already ill-fated efforts to rally regional powerbrokers to the cause of regime change.

The meeting exposes considerable contradictions and double-mindedness on the part of the United States. Though there are now moves for a more constructive and respectful relationship in the future, the sanctions and executive order that deems Venezuela an “unusual threat and danger to national security, human rights, and foreign affairs” still remain in place.

The change in tac on the part of one of the Obama administration’s most high-ranking and high-profile figures does appear to represent a backing down of the United States in its aggressive stance against Venezuela, particularly in terms of using the OAS to isolate and destabilize the Maduro government. Kerry’s surprise move and bilateral meeting with Rodriguez, the ambiguous handshake, and his express rejection of efforts to suspend Venezuela from the OAS, arguably indicate a change in Washington’s attitude. But in spite of all this, the change also appears to be primarily one of tactics rather than of overarching intent. Though it does represent a significant de-escalation of the saber-rattling of years past, the strategic objective of eradicating Chavismo and restoring of the neoliberal regime in all likelihood remains as firm as ever. One can discern a sense that some sort of tactical recalibration is taking place: rather than losing any good will that might have come out of rapprochement with Cuba and rather than beginning a new era of isolation based on being at the center of foreign meddling in Venezuela, Washington has probably concluded that, given the economic crisis, time is on the side of the opposition.

Another major factor in this calculus is the relatively weakened position of the opposition and the continued ability of Chavismo to mobilize the popular sectors, despite the electoral setback of December 6, 2015. Pushing now for a golpista-style “humanitarian” intervention would not advance this strategic objective because the opposition in Venezuela is presently incapable of posing a viable alternative on account of infighting and its violent and confrontational public image, despite its recent success in exploiting the current economic crisis to its own electoral advantage. Furthermore, such imperial interventionism will only rally the continent-wide Bolivarian sentiments to the side of the Maduro government and fortify rather than weaken the civic-military alliance in Venezuela.

As much as the opposition and its loyal commentators in the press might say otherwise, the Bolivarian government and its supporters want peace. And though the talks represent an important step in the right direction, full diplomatic relations between Washington and Caracas, however, would not guarantee a peace dividend. After all, recent eruptions of violence throughout Venezuela have included selective assassinations and incidents of street violence directed against government-aligned public officials and Chavista supporters, as well as some abuses committed by the security forces who are at the front lines of such strife.

Some respite from the defeat of Almagro’s bid to isolate Venezuela and pave the way for foreign intervention does, however, provide more political space for Maduro to maneuver. The Maduro administration will likely seek to decisively address the crisis of speculative capitalism that is manifest in the food shortages, a broken currency exchange system, and inflation. In order for the proposed “motors” of the economy to turn, of course, Maduro needs to heal the breach with part of the Chavista base that abstained from voting during the December 6, 2015, legislative elections.  With pressure from the right and the left to implement competing models for resolving these issues the Chavista project faces its greatest challenge.