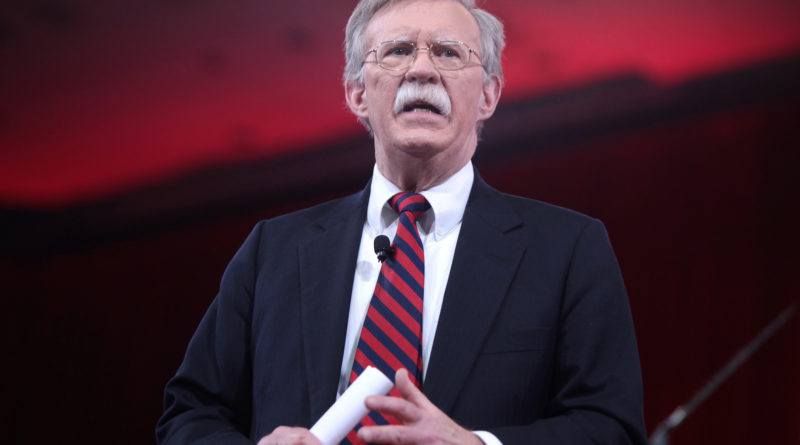 To view this article as a PDF, please click here.

On March 22 2018, Donald Trump appointed John Bolton as head of the National Security Council, making him the third person to hold this position since Trump took office in January 2017. Bolton officially started on April 9, replacing Lieutenant General H.R. McMaster, who had requested retirement after a reportedly tense couple of months in the White House marked by contention between him and President Trump. Bolton is a larger-than-life figure in Republican politics who has served in the administrations of presidents Ronald Reagan, George H.W. Bush,  George W. Bush, and as U.S. Ambassador to the United Nations. He is a chaotic figure that is well-known for his hawkish foreign policy strategies that have concerned, if not alarmed, Democrats and Republicans alike and could represent a profound threat to U.S.-Latin American relations going forward.

Controversy has followed Bolton through the course of his career, most famously regarding the 2003 U.S. invasion of Iraq, a conflict that provoked one of the most onerous challenges to diplomacy that the U.S. has had to face in recent years. Now widely considered to be a huge error, the invasion of Iraq took a heavy  toll on U.S. image at home and abroad once it was discovered that the claim that Saddam Hussein possessed weapons of mass destruction was a fallacy, and had been predicated on flawed and selective intelligence. Bolton played an important role in advocating for the invasion of Iraq in the Bush administration, and continues to defend his actions and the necessity of the invasion to this day despite widespread condemnation of the invasion.

Even in the world of diplomacy, Bolton takes a combative approach. In the early 2000’s, the president of the U.N.-backed Organization for the Prohibition of Chemical Weapons (OPCW) was José Bustani, a Brazilian diplomat. The OPCW was established to uphold the Chemical Weapons Convention, a 1997 treaty that 192 countries have since agreed to uphold. In 2002, when the Bush administration claimed that Saddam Hussein possessed chemical weapons Bustani proposed sending specialists to confirm the allegation. The Bush White House, especially Bolton, was pushing for the invasion of Iraq and saw Bustani as a dangerous impediment to its agenda. Around this time, Bustani claims that he received a threatening phone call from Bolton, who was serving as undersecretary of state at the time. Bustani summarized Bolton’s alleged statement, as was quoted in the New York Times as saying:

“He told me I had 24 hours to resign… and if I didn’t, I would have to face the consequences.”

Despite the alarming nature of the phone call, Bustani refused to back down from his position that the invasion of Iraq was unjustified. On April 22, 2002, shortly after the alleged confrontational phone call, Bustani was removed from his post as president of the OPCW following a special commission vote proposed by the United States in which a third of the member nations voted for his removal. This measure was shocking especially considering that Bustani had been re-elected unanimously to his post only 11 months before. Although controversy and speculations peaked following Bustani’s ousting, he chose not to speak publicly on the matter at the time.

The Organization for the Prohibition of Chemical Weapons was awarded a Nobel Peace Prize in 2013 due to its efforts to eradicate chemical weapons in Syria, a recognition which prompted Bustani to speak more openly about his removal from the organization in 2002. In response to Bolton’s appointment as National Security Adviser, Bustani told members of the media  “John Bolton is a bully.” Bolton maintains that Bustani was fired from the OPCW for incompetence.

It is evident that John Bolton’s worldview could have a catastrophic effect on U.S.-Latin American ties. In 2002, he accused Cuba of developing a biological weapons program. Also, when Bolton worked as the Assistant Attorney General for the Office of Legislative Affairs under President Reagan, he aggressively resisted efforts to investigate the notorious Iran-Contra scandal. During this period, Bolton argued that it was unconstitutional for independent counsels to investigate the scandal since the authority to hire and fire said counsels should remain “with the president or his delegate.”  Had that authority been given to the president as Bolton wanted, it would have impacted the investigation’s ability to remain unbiased. His efforts to undermine the Iran-Contra investigation reveals a dangerous disregard for ethics regarding issues that affect Latin America, which is likely to have serious consequences for relations in the future.

This is one of the many reports of John Bolton’s aggression and unruliness when faced with opposition.

In 2005, former assistant Secretary of State Carl W. Ford Jr. testified in front of the Senate Foreign Relations Committee on the eve of John Bolton’s appointment as the U.S. Ambassador to the United Nations. Ford claimed that Bolton was a poor nominee due to his tendency to abuse “his authority with the little people.” Ford recounted an anecdote in which Bolton so aggressively bullied a subordinate that the Secretary of State needed to get involved to resolve the situation.

Bolton’s problematic and ill-informed worldview has had harsh implications in the past, for example, Reuters confirms that the invasion of Iraq caused the deaths of over a hundred thousand people and cost the U.S. taxpayers more than a trillion dollars. It does not seem like John Bolton has learned from his past mistakes, as he continues to advocate for preemptive military action in Iran and North Korea, opinions that could have destabilizing and destructive implications for global relations. Bolton’s militaristic policy and tendency to play the global bully has no place in a world where multiple powers check the United States. Bolton appears to be living in a world that no longer exists, where the United States can strong-arm the world in order to get its way. Bolton’s fatal flaw is that he believes that the United States can act unilaterally without retribution from the rest of the world.