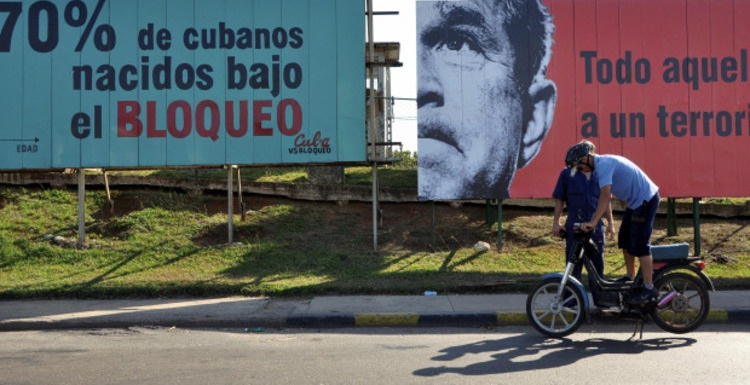 Commenting on the rueful recent passing of Nelson Mandela, President Barack Obama referred to the legendary South African figure as “one of the most influential, courageous and profoundly good human beings that any of us will share time with on this Earth.” The U.S. leader knew that for a multitude of reasons such an honor would not likely cascade on him. Yet, until just five years ago, Mandela was on the U.S. “terror” watch list, an obscenely anachronistic Cold War document engineered by continuing sectarian political necessities. Despite fundamental ongoing alterations brought about both in Cuba and in the global geo-strategic playing field, the Caribbean island will probably bear this label for decades to come due to the rigidities of U.S. domestic politics and the lack of a sufficient political propellant to drive required change.

The inflexible position that the Obama administration has had, just as was the case with its predecessors, is that the Cuban government is intrinsically different from any of its other Cold War adversaries, and thus requires a custom tailored template for Washington’s unremitting campaign of hostility against Havana. It seems that it is well beyond the ability of the White House to mobilize credible strategies to un-do a diplomatic paralysis that seemingly has gone ahead forever. We now know that despite what the administration has stated on scores of prior occasions, that it will not easily allow an entente cordiale to develop between Washington and Havana unless the Castro leadership dissolves itself. This stipulation has never yet seen itself applied in various versions, but has never entirely been different from the likes of Iran or North Korea. That is why one must take note of the fact that the embargo aimed at Havana may be as much a political strategy as an economic one. If the dispute were entirely economic, it would be more open to a rational solution than has proven to be what we have here in its present manifestation.

Cuba Has Changed on Its Own Accord, Not Because of the Brilliance of US Policy

In fact, Cuba has been dramatically changing on its own accord and it can be said that the U.S. trade embargo has applied enduring damage to Cuba’s economy. The effects of Washington’s sanctions are being registered every day on Cuban trade interests as well as on international businesses engaged in commercial transactions, even though over the years Washington’s embargo has been effectively countered on a number of occasions. Over the past five years, Cuba has undertaken a multitude of inventive economic, fiscal, and social reforms. Although it suffered from a number of setbacks, small private businesses are beginning to thrive in Cuba as ordinary Cubans can buy and sell real property and automobiles. Cubans can travel abroad without fear of being denied reentry to their country. There is a new sense of optimism about the future in terms of nationhood and pride in the possibilities of Cuban society.

The generation of Cubans born after the Revolution is increasingly well educated and generally more aware of the strengths and weaknesses of economic and political systems. Most systems elsewhere will readily admit that the original communist economic model in part has become dysfunctional. Also, they are now at least cautiously optimistic that it is being gradually replaced by a new model that will incorporate the positive goals of the Revolution – universal education, health care, social equality – with an increased tolerance of market forces.

Despite over half a century of active bellicosity by the U.S. and decades of purportedly terrorist activities, Cuba has cooperated with the U.S. in a variety of areas including drug interdiction and anti-criminal cooperation. The island has also been a market for hundreds of millions of dollars of American exports, despite the fact that the trade is overwhelmingly one way (for most of this period Cuban imports have been illegal in the United States).

In November 2013 President Obama was the honored guest at a private fundraiser held at the Miami home of Jorge Mas, who served as the president of the Cuban American National Foundation. A few of Obama’s remarks were specific about the need for U.S. policy changes towards Cuba, but were muddled over how such changes would be manifested indicating how tangled and confused Washington policy remained. Obama declared:

“We’ve started to see changes on the island. Now, I think we all understand that, ultimately, freedom in Cuba will come because of extraordinary activists and the incredible courage of folks like we see here today. But the United States can help. And we have to be creative. And we have to be thoughtful. And we have to continue to update our policies. Keep in mind that when Castro came to power, I was just born. So the notion that the same policies that we put in place in 1961 would somehow still be as effective as they are today in the age of the Internet and Google and world travel doesn’t make sense.”

While the president’s remarks were greeted by warm applause from the largely Cuban-American audience, for the most part his words were rhetorical at best – a reworking of hackneyed phrases dating back to Obama’s days as a senator from Illinois. The radical wing of Cuban-Americans represented in the U.S. by hard politicians such as Representative Ileana Ros-Lehtinen and Senator Robert Menendez have perpetuated a feral mentality that would only vanish with the overthrow of the Cuban government and its replacement by descendants of those who ruled Cuba under Batista. For example, former Representative Lincoln Diaz-Balart (ironically, Fidel Castro’s nephew) is obsessed with becoming President of Cuba. While serving as a U.S. Congressman, he openly advocated the assassination of Fidel Castro (illegal under U.S. law), he defended Velentin Hernández, who was convicted of murdering Luciano Nieves, a fellow Cuban exile who supported negotiations with the Cuban government. He also lobbied extensively for the release and pardon of Cuban exile Orlando Bosch, a bona fide and self-admitted terrorist who was involved in the 1976 bombing of Cubana Flight 455, which killed 78 passengers.

No Change Can Be Expected

Regardless of who succeeds Obama as president, Washington’s anachronistic policy towards Cuba can be expected to continue even after the succession of a new generation of Cubans have risen to the level of leadership on the island. The Cuban embargo has been a treasured legacy passed from Republicans to Democrats and back. Nevertheless, most U.S. politicians have no idea why they should continue to support the embargo. It is now part of the American cultural and social legacy, comparable to the predictability of Monday Night Football.

During one of the author’s visits to Cuba, a senior official told him with a bitter shake of his whitening head: “Your government will never be satisfied even if we [the Cuban government] stood on the Malecón (Havana beachfront) with pistols to our heads and blew our brains out.”

The U.S.’s propensity to fail to act with dignity and provide solutions to diplomatic problems in other parts of the world seems to be beyond Washington’s ability when applied to Cuba. Washington would be wise to understand that, if it has any hope for even a remotely respectable policy towards Cuba, it must give up its lunatic stance that has no prospects for success or respectability.

Dr. Timothy Ashby, Senior Research Fellow for the Council on Hemispheric Affairs, former counter-terrorism consultant at the State Department, as well as bestselling author of “Time Fall and Devil’s Den“.