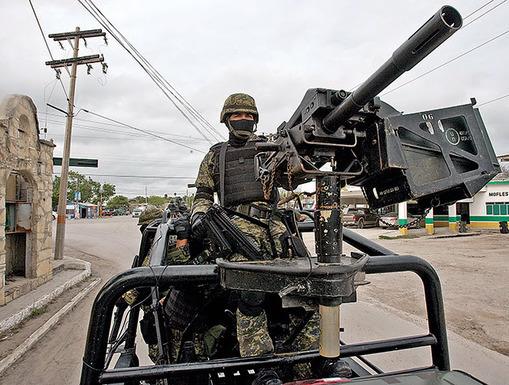 By: Michael Lohmuller, Research Associate at the Council on Hemispheric Affairs

Two years into Mexican President Enrique Peña Nieto’s term, the security situation in Mexico remains grim, with violence most recently erupting across the northeastern state of Tamaulipas. Since April 5, infighting among competing factions of the Gulf Cartel, as well as sporadic gunfights with the Zetas, a rival drug trafficking organization, has left over 100 people dead.[1] This spike in violence has raised concerns about a return to the rampant bloodshed Tamaulipas suffered in 2010, when around 1,200 violent drug-related incidents occurred following the split between the Gulf Cartel and its paramilitary enforcers, the Zetas.[2] In responding to the situation, the administration of Peña Nieto has adopted its own anti-crime strategy of militarization almost identical to that of his predecessor, President Felipe Calderón (2006-2012). After assuming office, Calderón declared a “war on drugs” and dispatched thousands of federal police and soldiers to reclaim designated areas of Mexican territory from the nation’s drug cartels. Yet this policy has done little better than contribute to an intense and brutal wave of violence, which reached its high mark in the border city of Ciudad Juárez. Upon coming to the presidency, Peña Nieto promised a weary Mexican citizenry he would use a less confrontational strategy, minimizing the use of military forces in law enforcement tasks. Yet the echoes of Calderón’s anti-crime strategy under Peña Nieto raises the question as to whether Tamaulipas will descend into the same catastrophic chaos seen in Ciudad Juárez from 2008 to 2011.

Due to its geographical location, Tamaulipas is crucial for the movement of goods between the United States and Mexico. The Mexican state has the largest number of international bridges along the U.S. border (17 between Matamoros and Nuevo Laredo), proximity to several major U.S. highways, and an extensive coastline.[3] For these reasons, Tamaulipas has become the Mexican state with the most international trade, and in 2013 a majorityof the United States’ $280.5 billion worth of Mexican imports went through the state.[4] Yet, due to its strategic location and high volume of trans-border movement, Tamaulipas has also been transformed into a key point for the transport and distribution of drugs, weapons, and money, as well as a major point of transit for migrants entering the United States.

In order to profit from the state’s illicit markets, the Gulf Cartel began consolidating its dominance over Tamaulipas in the 1980s and 1990s. In 1997, the cartel took the unprecedented step of hiring former military members to serve as bodyguards and armed enforcers. The formation of this group – the Zetas – proved to be a momentous shift in the landscape of Mexico’s criminal underworld, bringing a new level of militarization and barbarity to cartel-related violence. Yet the Gulf Cartel’s clout in Tamaulipas began to diminish after its leader, Osiel Cardenas Guillen, was arrested in 2003 and then extradited to the United States in 2007. During this period, the influence of the Zetas grew within the organization, and in 2010 they formally split with the Gulf Cartel to form their own criminal enterprise. The Zetas’ challenge to their former employer for control of Tamaulipas turned the region into a war zone, and in November 2010, President Calderón deployed troops to the state. Violence finally subsided in 2012, and an uneasy truce between the two cartels brought a semblance of order to the region.

However, violence recently has returned to Tamaulipas following another apparent split in the Gulf Cartel. In February, Javier Garza Medrano – who, according to Mexico’s National Security Commission, oversaw the Gulf Cartel’s criminal activities in the coastal city of Tampico – was arrested.[5] Medrano supposedly blamed fellow cartel member Aaron Rogelio García for providing the information leading to his arrest, and Medrano ordered García’s murder. At García’s funeral, gunmen entered and reportedly killed García’s wife, brother, and sister-in-law.[6] Full-scale violence soon broke out in Tampico and Ciudad Madero, and 28 people were killed in the two cities between April 5 and 8, 14 of them during a five-hour span. Since then, dozens have died in the ensuing violence, with 14 people killed in a single day during a string of gun battles in the city of Reynosa, located just across the border from McAllen, Texas. In total, at least 70 homicides occurred in April, and in the first 20 days of May there have been at least 50 homicides.[7] Several high profile assassinations have also occurred, such as the murder of Tamaulipas chief of intelligence Colonel Salvador de Haro Muñoz in his car in the state capital of Ciudad Victoria.[8] Ten police officers were later arrested on charges of purposely leading Muñoz into an ambush.

By all appearances, the Zetas are taking advantage of the Gulf Cartel’s internal strife and are launching attacks in order to gain control of Tamaulipas’s international bridges and ports. This has resulted in a complex three-front battle of Gulf vs. Gulf, Zeta vs. Gulf, and Security Forces vs. Drug Cartels. There have also been reports of internecine Zeta conflict in Ciudad Victoria and Nuevo Laredo. In response to the growing citizen insecurity engendered by these battles, President Peña Nieto has sent in security forces, including the army, navy, and federal police. This militarization of Mexico’s internal conflict has three main goals: 1) dismantle criminal groups through the collection and use of intelligence; 2) block routes for the illicit trafficking of people, weapons, and money; and 3) guarantee local institutions for security are sufficient, efficient, and dependable.[9] Tamaulipas has also been divided into four regions (Frontier, Coast, Central, and South) with an army or navy officer in charge of implementing the government’s security plan in each zone. In addition, urban areas will be patrolled 24 hours a day, seven days a week, and vigilance will be further strengthened in ports, airports, and customs. Local police forces will also be reviewed in order to eliminate corruption. Mexican Interior Minister Miguel Angel Osorio Chong said these moves by the government mark the coming of a “new phase” in the battle against the drug cartels.[10] Tamaulipas state government spokesman Guillermo Martínez claims the resurgence of violence in Tamaulipas is the result of government successes in “squeezing” the criminal groups, saying, “The important thing is that we are facing the problem head on.”[11]

Facing the problem “head on,” however, recalls the highly confrontational and aggressive policies Calderón used to combat epidemic inter-cartel violence in Ciudad Juárez from 2008 to 2011. In 2008, a killing spree gained momentum in Ciudad Juárez as the Sinaloa Cartel and Juárez Cartel engaged in a vicious battle for control of the city. Calderón deployed military forces, which took over security operations in the city from the highly corrupt local police. In April 2010, federal police forces replaced the military in the city. Yet violence continued to rise, and 2010 ended as the bloodiest year in Ciudad Juaréz, with over 3,000 homicides.[12] From 2007 to 2011, the Autonomous University of Ciudad Juárez reported that 450,000 people fled the city.[13] Around 10,500 people were killed in that time span. At its worst, the average murder rate was nine murders per day, with over 300 deaths during some months.[14] In 2012, violence finally receded and life began to reassume some form of normalcy. Authorities attributed a decrease in the killings to their own efforts, yet it is more likely that the improvements resulted from the Sinaloa Cartel establishing local predominance over the Juárez cartel.[15]

Despite Peña Nieto’s rhetoric during his campaign and early months in office – which suggested that he would not emulate Calderón’s emphasis on the use of military in local law enforcement activities – the president’s strategy in Tamaulipas looks much like his predecessor’s approach in Ciudad Juárez. Interior Minister Osorio Chong has said it will take at least six months for the government’s strategy to produce results, and three to four years for Tamaulipas’s state and municipal police forces to be reconstituted. As the body count continues to rise, however, the short to medium-term question is whether these policies will only serve to exacerbate violence in Tamaulipas and push the state towards a situation reflecting Ciudad Juárez’s extreme violence. In general, crackdowns by the government and the elimination of cartel leaders create uncertainty in the criminal underworld’s balance of power and corruption networks. In turn, this chaos in the criminal market intensifies violence as cartel leaders move to consolidate power, ultimately making it difficult for Mexico’s law enforcement agencies to have any significant effect in suppressing violence and crime. For these reasons, the ruthless violence, heightened citizen insecurity, and massive population displacement that Ciudad Juárez experienced were exacerbated by the interdiction operations of Mexican security forces.[16]

Consequently, restoration of calm in Tamaulipas may be more indicative of the establishment of a semi-stable equilibrium between drug trafficking organizations than a government strategy aimed at dismantling those criminal organizations. For instance, a reduction from the violence of 2010 in Tamaulipas was only achieved following an agreement between the Gulf Cartel and Zetas (although the government likes to take credit for this result). Given the strategic placement of Tamaulipas for illicit drug and contraband flows, it is unlikely drug trafficking organizations will stop fighting for control of the state. The Mexican government should thus prioritize citizen security, and attempt to provide a buffer between the populace and drug cartels in order to mitigate collateral damage during the violent power struggle. The government must work to eliminate crimes such as kidnapping and extortion, rather than simply hammering the cartels with military force. Such shortsighted actions might only splinter the organizations and spawn more violence against the local population.