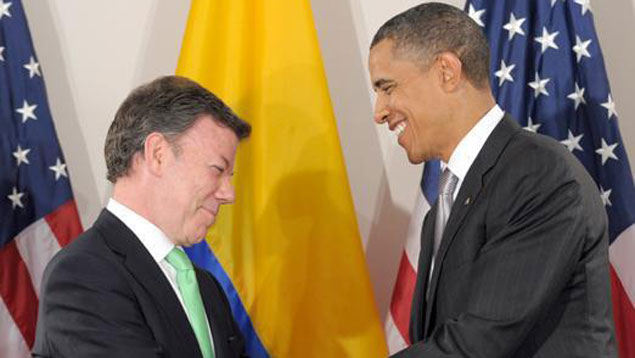 In recent years, Colombia has signed a bundle of free trade agreements with Chile, Peru, Mexico, and Canada, while seeking membership of the Asian Pacific Economic Cooperation (APEC) and opening markets with Japan and South Korea. Bogotá now seeks new markets for its products because of the diplomatic and economic stalemate with Venezuela, Colombia’s second trading partner. Nevertheless, Colombia has been actively seeking a trade agreement with the United States, and despite a seemingly clear path for its approval, it also entails some controversy.

It’s worth noting that in 2002, Colombia and the United States signed the Andean Trade Promotion and Drug Eradication Act, which offers a way to foster human development and at the same time controls cocaine production. Both countries also signed the controversial Plan Colombia in 1998. For some Colombians, and particularly for the last several administrations in both countries, a free trade agreement with the United States would involve unconditional support from Colombians, given their longstanding common struggle against the drug trade.

Several congressmen, particularly Democrats, often have been reluctant to support this agreement. They have based their argument on the fact that Colombia does not adequately protect union leaders from the insurgents or paramilitaries. They are not the only ones dragging their feet on the trade accord. The Washington Office on Latin America (WOLA) presented what they called an “argument” three years ago where, aside from corroborating on the crimes committed against union leaders, it underscored that the peasants’ displacement would also increase the expropriation of lands in, if need be, a more violent manner in order to “benefit agro-export crops such as palm oil, which would benefit from the trade agreement.” The previously mentioned report adds that a possible agreement would most likely adversely affect the poor, weaken regional development, and even pose a national security risk.

Notwithstanding, this statement, alongside those extended by a number of congressmen, seemed to overlook that several U.S. companies were permissive regarding insurgent activities by bribing them to protect their own property, such as the contested cases of Coca-Cola and Dole. One of the most notorious cases of neglect came from Chiquita Brands, the multi-national successor of the United Fruit Company, which in a “bona fide” act went to the Department of Justice and acknowledged its own involvement with the paramilitaries. Despite paying a USD 25 million fine to the U.S. government that had scrutinized the company’s activities, mounting pressure from victims of the paramilitaries along with Colombian state officials have led Chiquita Brands to give up its market share in Colombia’s banana industry.

All in all, despite the fact that the Colombian and U.S government officials were aware of the human rights violations that had occurred within the operations of companies like Chiquita Banana, Coca-Cola, and Dole, redress has been delayed. Why does the Colombian government not resort to fury against the U.S. even in the face of these notorious violations?  Although both countries have tried to tackle the issue of human rights violations, at the end of the day they are more concerned with their economic interests, and hold those to be much more of a priority. Colombia will not thrive without aid from the U.S. (third largest recipient of U.S. assistance), and the U.S. will never be able to tackle the root of the drug problem unless they cooperate with Colombia.

There are other international bodies that support the benefits and advantages that an agreement will bring to Colombia. According to an article published by Sergio Arboleda University in Bogotá, Colombia, the World Bank strongly believes that as a result of free trade, forty-four million Colombians “can enjoy a large quantity of goods and services at lower prices and better quality.” Former President Álvaro Uribe assured that intellectual property of medicine would not be affected by the free trade agreement.

For some organizations like the Independent Institute, a trade agreement with Colombia would not make too much of a difference for the improvement of the U.S. economy. In reality, such treatment will bring several benefits stateside, not only because of the reduction on taxes on goods and services, but also because the United States will be able to rely upon Colombia as a way to exercise U.S. influence within Latin America, at a time when it is on the wane. Meanwhile, a number of left-leaning Latin American nations like Venezuela, Nicaragua, Ecuador and Bolivia are likely to continue to drift away from Uncle Sam. Furthermore, Brazil has become a driving force, not only of its own growth but for the rest of the region as well, thus ending up with an inevitable decrease of Washington’s economic leverage in the region.

Colombians are not the only ones concerned about imminent trade approval with one nation or another. Widespread skepticism is prevalent over how the Colombian free trade agreement, along with the two other agreements that are also up for signature and have been on the congressional back burner (those of Panama and South Korea), would benefit the U.S. economy. Doubts arise from the fact that many U.S. corporations are outsourcing their workforce, increasing the nation’s already battered employment prospects. Case in point: General Motors and Ford have moved part of its operations to Mexico, which in turn has generated a labor crisis in Detroit and its surrounding areas.

Consequently, in the light of these mixed signals, the Obama administration is contemplating a series of measures with its trade agreement bills, in order to help more of those who have lost their jobs as a result of outsourcing. But Republican legislators, staunch supporters of free trades, consistently have expressed their disdain for the extension of the Trade Adjustment Assistance, in opposing President Obama’s aspirations to link stimulus packages to the treaties.

Even in the midst of such uncertainty, how can both Washington and Bogotá guarantee a fair and equal treatment of trade to workers and consumers in both countries?  It starts with something modest: as the bipartisan agreement in 2007 suggests, both the Colombian and U.S. governments should abide by the rules so as to benefit the workforce of both countries. Both the U.S. and Colombian governments have expressed concern regarding the lack of protection of union leaders in Colombia. Washington has admonished that Bogotá must protect the labor rights of its own union leaders, who have been cut down by the fusillades of right-wing vigilantes in the country. Bogotá must follow Obama’s insistence that abuses of labor in either country will not be tolerated. It is imperative for Colombia to make greater strides to abolish human rights abuses while renovating its highways, ports, and overall physical infrastructure to better channel the movement of trade. In addition, Colombia must protect the country’s campesinos and their standard of living in the event that their farm products lose value and force an increase in the migration to already sprawling urban slums. Even if such formulae are able to challenge the existing debate surrounding the advantages of the pending free trade agreement and the degree to which the agreement reflects mutual benefits for both the United States and Colombia, we will still be at the beginning of fashioning an equitable trade policy.

This analysis was prepared by COHA Research Fellow Robert Valencia

To read more from COHA on the U.S.-Colombia Free Trade Agreement, click here.