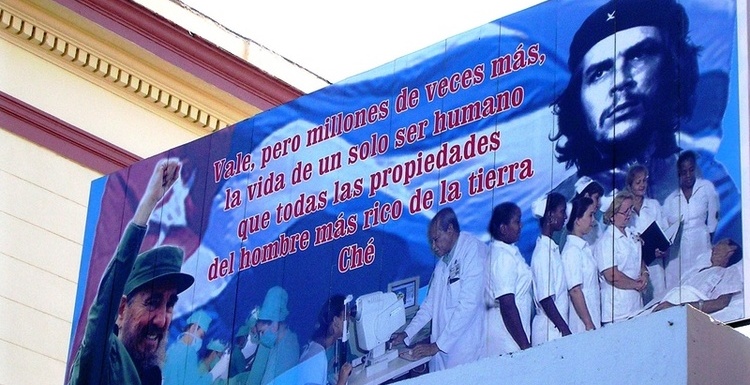 By: Fei Huang, Research Associate at the Council On Hemispheric Affairs

While Ebola is threatening some economic giants away from the African continent, brigades of Cuban doctors have boldly marched to the frontline. Already 165 health professionals (63 nurses and 102 doctors) have been deployed in Sierra Leone to help fight the virulent epidemic. The Washington Post described Cuba as “punching far above its weight.”[1] Moreover, Havana is planning to send specialists to Nicaragua as part of a national plan to combat Ebola.[2] On October 20, Raul Castro declared that two health brigades would be dispatched to Liberia and Guinea to contain the epidemic. Correspondingly, 53 healthcare workers were sent to Liberia and 38 to Guinea on October 21, which was originally announced at the Alliance for the Peoples of Our America (ALBA) meeting[3]. This should not come as shocking news. Since the Cuban Revolution (1959), medical diplomacy has become a mainstay of Cuban foreign policy strategy, and Africa was one of the first continents where Cuba’s health missionaries had arrived in the time of Cold War[4].

Countries around the world will not easily forget Cuban doctors’ devotion to providing healthcare in times of need to some of the poorest nations in the world. Dating back to the early days of the Revolution, Cuba sent a large number of healthcare personnel to disaster stricken areas, from the 1960 deadly earthquake in Chile, to the 2008 Wenchuan earthquake in China. Currently, there are approximately 30,000 Cubans working in Venezuela, and 4,500 Cuban doctors working in the rural areas of Brazil, in support of the countries’ local public health system.[5]

Cuban doctors treating Ebola have been trained according to World Health Organization (WHO) standards. Before departing for Africa, the staff is trained for a minimum of two weeks on appropriately treating patients while assuring that they are protecting themselves from the virus.[6]

Besides reaping goodwill from partners of the Global South, Cuba also gains considerable financial benefits. When Hugo Chávez took office in Venezuela, Cuba began to practice an “oil for doctor” model. Dating back to 2000, agreements were signed between both countries. The one signed in 2005 indicated that Venezuela would provide a fixed number of barrels of petroleum per day in exchange for Cuban doctors, medicine and medical training.[7] This initiative garnered a good deal of political capital as the medical care was highly appreciated by the recipient countries. Cuba’s medical diplomacy contributes to overwhelming international support in the United Nations for the United States to dismantle its embargo towards Cuba.[8] El Salvador’s PresidentSalvador Sánchez Cerén, for example, called for an end to the U.S. economic blockade against Cuba at the 69th General Assembly this September.[9] The New York Times also published an influential editorial “Obama should End the Embargo on Cuba,” arguing that normalization of the relations with Havana will be beneficial to the future of US-Latin American relations.[10]

While the direct export of medical personnel around the world remains highly stable, medical training serves as a means for Cuba to extend its diplomatic model. Each year, Cuba attracts large numbers of students from around the world to study medicine. For instance, the Latin American School of Medicine in Havana, the largest medical school in the world, provides free training for students mainly from Latin America and the Caribbean.[11] Cuba has also sent medical professionals to train and educate students at local institutions, better preparing them to care for members of the communities. The Cuban medical training programs even extend to the South-West Pacific. By 2009, 186 Timorese students were trained locally, with a larger cohort of 658 such students being trained in Cuba.[12] In addition, the Faculty of Medicine of East Timor National University was strongly supported by Cuban medical professors.

The Controversial Legacy of Castro

Cuba’s healthcare system has long been lauded by the rest of the world for its free and high quality healthcare. According to 2012 statistics from UNICEF, the life expectancy at birth in Cuba is 79.1 years, exceeding that of most countries in the Western Hemisphere—including the United States (78.8). [13]According to the National Statistics Office, with 82065 doctors, one for every 137 people, Cuba has one of the best-staffed medical networks in the world.[14]

The island’s outstanding achievement in healthcare is attributed to the socialist power of “mass organization,”[15] and the capacity to “mobilize the entire country in a nationwide campaign to do what needs to be done.” [16] Healthcare that covers the country’s entire population is a tremendously ambitious project, which involves the participation of all mass organizations. For instance, in 1964, the trade unions, Cuban Women’s Federation, the neighborhood Committees for the Defense, among others, promoted the distribution of anti-polio vaccine to 2,450,000 children under the age of 14 in 1964, and 1,407,000 children under six in 1966.[17]

Cuban doctors are entirely accessible to the masses so that they can find one within a few blocks from their home. A strong domestic healthcare system is the foundation of Cuba’s remarkably consistent medical collaboration with other countries, which has been carried out for over half a century.

However, the export of doctors from the island has been criticized as being more political than humanitarian. Amauris Smartino Flories, a doctor and an anti-Castro activist, pointed that Cuba was sending more doctors to oil-rich Venezuela rather than Haiti, the hemisphere’s poorest country.[18] While curing the wounds of people around the world, the Cuban doctors are unavoidably suspected of disseminating propaganda into the minds of those they interact with. Anti-Castro critics insist that security concerns arise while Cuban presence grows. It is claimed by sources close to the Martelly government of Haiti that, by collecting intelligence in the countries they serve, the Cuban medical corps are ”playing a double game.”[19] However, it should be noted that the United States and other politically engaged nations carried on the same range of activities, even on a more intense level.

As the United States pours money into West Africa, the small island state of Cuba is contributing with medical care, filling the medical vacuum by dispatching doctors and nurses to nations needing them. Margaret Chan, Director-General of WHO said late last month regarding the situation of the situation, “Money and materials are important, but those two things alone cannot stop Ebola virus transmission.”[20] The region is in urgent need of medical personnel, and Cuba was one of the first governments to send health care workers prepared to combat Ebola.

Despite the suspicion that one of Cuba’s main aims is to spread ideology rather than medicine, Cuba’s performance has gained praise from the Ebola-stricken countries. On October 8, President Dr. Ernest Bai Koroma of Sierra Leone expressed gratitude and appreciation to Cuba: “This is a friendship that we have experienced since the 1970s and today you have demonstrated that you are a great friend of the country.”[21]

As the high-flying symbol of the South-to-South partnerships, the Cuban-African cooperation model is transforming post-Cold War hegemony posed by the United States. The collaboration between Cuba and Venezuela has long been considered a challenge to U.S. dominance in the region. As the applause for Cuba increases, the US is struggling to maintain its “global giant” profile.

According to an interview with Julie M. Feinsilver conducted by the Council on Hemispheric Affairs,this should be considered as an appropriate opportunity for the United States, United Kingdom and Cuba to collaborate in stemming the Ebola epidemic. “The US and UK are providing medical facilities while Cuba is providing medical staff,” Dr. Feinsilver said.

“Our principle has been to share what we have and not to give what we don’t,” said Dr. Jorge Pérez Ávila, the director of the Pedro Kouri Institute for Tropical Medicine in Havana. “The little we have, we share. Our principle resource is human capital.”[22]

This is a campaign purely based on medical boundaries, not political ones. Cuba deserves recognition by the international community for its prompt response to the Ebola epidemic.

[1]“In the medical response to Ebola, Cuba is punching far above its weight,” accessed October 23, 2014, http://www.washingtonpost.com/blogs/worldviews/wp/2014/10/04/in-the-medical-response-to-ebola-cuba-is-punching-far-above-its-weight/

[15] The mass organization is typical of its huge power to motivate people under the same goal; it is the means through which the government acts out its policies. See http://www.factba.se/handbook-page.php?id=420600