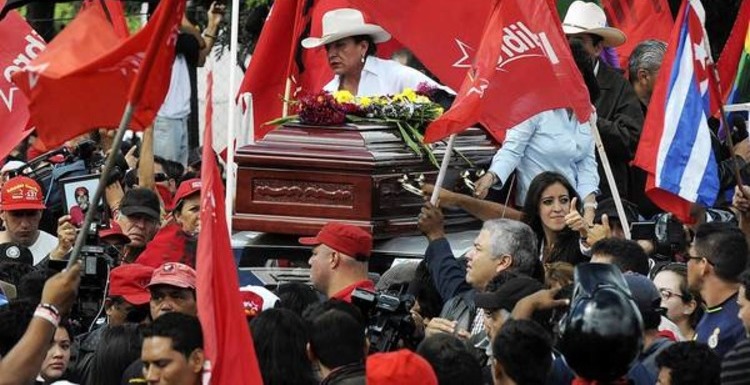 On November 24, more than three million Honduran citizens went to the voting booths to select the next president and ruling party that would succeed the government of President Porfirio Lobo. Lobo’s administration has been mired with accusations of corruption and ineffectiveness since its contested election in 2009, just months after a military coup deposed then-president Manuel Zelaya (2006-2009).

That very election night, without a full tally of the votes cast, the heads-of-state of Panama, Colombia, and Guatemala congratulated the National Party’s Juan Orlando Hernandez on his presidential victory. [1] Moreover, Lisa Kubiske, U.S. ambassador to Honduras, just before 1 A.M. the following Monday, recognized not only Hernandez’s victory, but also the “transparency” and the “few incidents of violence” during the elections. [2] And, on Monday evening, the U.S. State Department released a short press release commending the “peaceful participation” and “transparent” electoral process. [3] These statements were not only “premature,” as Mark Weisbrot, Co-Director of the Center for Economic and Policy Research, claimed following election day, but they also paint a portrait of knee-jerk approval for what is now looking like a contested election. [4]

In the days following November 24, Xiomara Castro of the LIBRE party and Salvador Nasralla of the Anti-Corruption Party (second and fourth in the ballots) have come out against the Supreme Electoral Tribunal’s results, with the former claiming that the results were “illegitimate.” On Monday, December 2, Castro presented to the tribunal a laundry list of discrepancies throughout the electoral process and demanded a recount, which the agency has accepted, “urging the party to recognize the outcome of the election based on the audit.” [5] The National Lawyers Guild, which sent 17 credentialed observers to Honduras to monitor the elections, also questioned the validity of the tribunal’s results in a statement released the following Tuesday, November 26. They cited reports of intimidation by state actors leading up to the elections, LIBRE activist deaths over the weekend, and a number of other irregularities and incidents during election day. The organization also criticized the U.S. government’s satisfaction with the elections, releasing a statement by NLG president Azadeh Shahshahani that “U.S. government officials should refrain from assessing the validity of the election at this early stage and instead insist on protecting the rights of Honduran civil society.” [6]

The question is: why have the U.S. ambassador and the State Department at home been so unseemly with their haste in so hurriedly evaluating the election results? In fact, it can be said that ever since President Zelaya was overthrown by an unconstitutional coup, the U.S. has provided political cover for the deterioration of democratic institutions. Ambassador Kubiske should be summoned to Washington, where she should be queried by congressional committees.

Additionally, Leo Gabriel, a member of the European Union electoral observation mission (EU-EOM) in Honduras, directly dissented from the official report of the mission, which gave “high marks ‘in terms of voting transparency as well as respect for the will of voters in the tabulation.’” [7] In an interview with Opera Mundi, Gabriel explains major irregularities that compromised the electoral process:

I can attest to countless inconsistencies in the electoral process. There were people who could not vote because they showed up as being dead, and there were dead people who voted. It was also clear that there was a huge mess at the voting stations, where the hidden alliance between the small parties and the National Party led to the buying and selling of votes and [electoral worker] credentials. [8]

The Honduras Solidarity Network also released a preliminary report regarding the elections based on its joint observation mission with Alliance for Global Justice (made up of 166 accredited observers). The report, released November 26, likewise witnessed vote and credential buying, but also cited intimidation and violence of activists, observers, and poll workers that heavily disrupted electoral processes in a number of localities throughout the country. [9]

In light of these developments in an election that was troubled from its inception, it is difficult to understand Washington’s rubber stamp approval of Honduras’s most recent electoral contest. As we go to press, there is a growing body of evidence of electoral tampering. While it may be premature to make an outright determination of electoral fraud at this time, the general climate of intimidation both before and just following the elections, the murder of LIBRE activists, and the credible reports of serious irregularities of the November 24 elections merit immediate investigation and an audit of the election results.

Ian Kowalski, Research Associate at the Council on Hemispheric Affairs