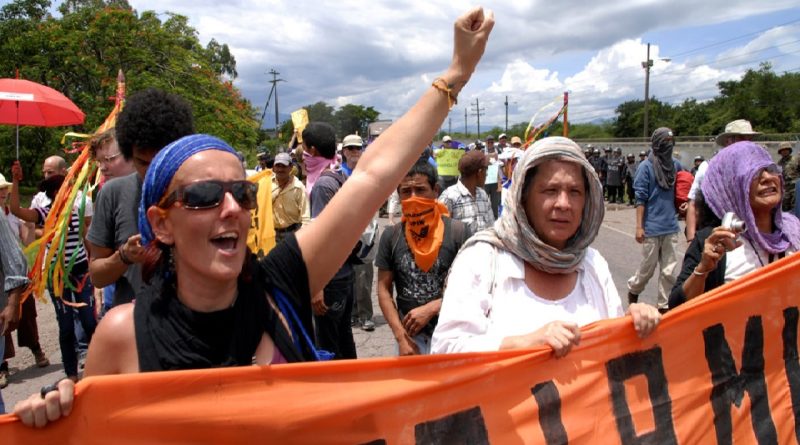 On June 4, 2017, The Guardian reported that FMO and Finnfund, among the international backers of the Agua Zarca dam project, have decided to permanently withdraw their funds. In a statement delivered to the British newspaper, they stated that they “intend to exit as soon as possible.”[i] Another backer, Cabei, the project’s biggest investor, has chosen to simply halt all loan payments rather than formally withdraw from the contract. This comes a year after a decision by FMO and Finnfund to suspend their monetary support for the Honduran construction firm Desarrollos Energéticos S.A. (DESA), a company partially owned by the Atala family who are suspected of having backed the 2009 coup.[ii] Citing the murder of activists as well as the violence and intimidation perpetrated by armed actors linked to DESA and the Honduran elite, numerous NGOs have long been advocating for foreign companies to “fully and permanently withdraw from the project.”[iii]

The decision to suspend loan payments followed the murder of Nelson Garcia on March 15, 2016, a Civil Council of Popular and Indigenous Organizations (COPINH). Garcia was shot and killed while helping poor families resist land seizing efforts in the small Honduran town of Rio Lindo. The assassination occurred only days after the March 2016, murder of Berta Cáceres, a civil rights leader and co-founder of COPINH. She was killed after lodging numerous complaints of death threats against DESA. It is not a coincidence that these backers have decided to stop funding the project in the same week that the trial for Berta Cáceres has resumed.[iv] Her murder as well as the numerous attacks and death threat perpetrated against her colleagues have been widely condemned by the international community. In a January 2017 report, the NGO Global Witness referred to Honduras as “the deadliest place to defend the planet”; at least 124 environmental activists have been murdered since 2010.[v] While the suspension of monetary support has certainly been a positive step, after the many brutal assassinations related to the project, one has to wonder why it took the project’s backers so long to suspend monetary support.

Aside from the abhorrent levels of violence associated with the venture, the Agua Zarca project has been widely condemned by environmental activists for failing to consult the local indigenous community before proceeding ahead with the project, in its self an illegal action under the Honduran constitution. COPINH, founded decades ago with the goal of defending indigenous and environmental rights, has been at the forefront of this battle and has vehemently defended the indigenous Lenca people’s sacred, ancestral land and civil rights. The Lenca reside in western Honduras between the departments of Intibucá and the Santa Bárbara River, which not only has a unique cultural and spiritual value but is an important resource for swimming, washing and fishing. The river is being threatened with complete desiccation by this project, which would also have a negative impact on surrounding farm lands.[vi]

The decision by DESA’s backers to withdraw from the project makes it unlikely that it will be able to move forward and demonstrates that consistent pressure from the international community and environmental activists can have real-world results. DESA received $17 million before payments were suspended, which is under 40 percent of the money required for construction.[vii] Although a good deal of uncertainty remains due to the withdrawal schedule and the position of financing entities still on board (German Voith-Hydro/Siemens and regional development bank Banco Centroamericano de Integracion Economica), this represents a sliver of hope in a country that has favored the interests of business tycoons over the environment and the lives of local indigenous people.

While this is certainly a win for environmental activists, the process has yet to be finalized. Both FMO and Finnfund admitted that it will take some time to completely withdraw from the project and that “project financing being a complicated field, many aspects and issues have to be cleared from contractual and responsibility perspectives.”[viii]  On June 13, COPINH released a statement denouncing the pace at which both financial backers were taking to withdraw from the project. COPINH stated that this delay would mean that the communities in danger continue to suffer from aggression and intimidation. The group also remarked that the decision to withdraw funds was being used as a way to avoid responsibility and introduce other hydroelectric projects in the future.[ix]

It should but be noted that corrupt development projects have increased significantly since the 2009 coup and this is one of the many projects threatening the Honduran countryside. For example, nearly 30 percent of the country’s land has been reserved for mining projects.[x] Following his 2014 inauguration current president, Juan Orlando Hernandez stated that, “Honduras is open for business”.[xi] The Honduran indigenous community has been disproportionately affected by the dreadful environmental impacts of mining, logging and dam projects as well as the violence that is so often associated with such megaprojects. As such, activists would be wise to continue their efforts to defend against the gross injustices committed against the indigenous and pressure backers to withdraw funding from the Agua Zarca project.