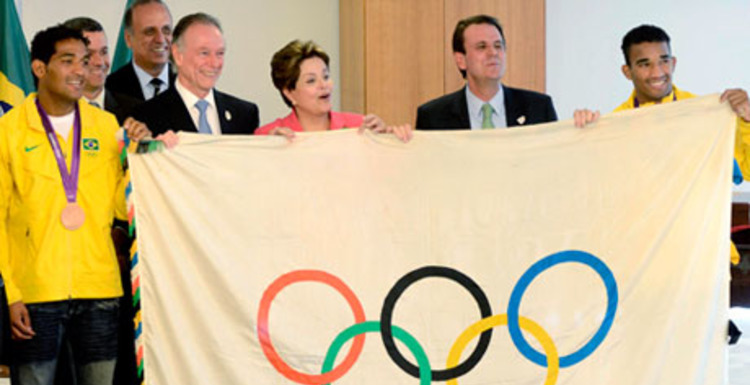 As Brazil prepares to host the 2014 World Cup and 2016 Olympics, the South American poster child is under pressure to conduct immense infrastructural reforms, an ambitious undertaking that will require a reversal of the economic stagnation that has plagued the nation since former President Luiz Inácio Lula da Silva left office in 2011. Growth in Brazil, the world’s sixth-largest economy which had been seeing prosperity along with increases in the prices of the nation’s most important exports, slowed from 7.5 percent in 2010 to 2.9 percent in 2011, and finally to a startling 0.9 percent in 2012, with only 2.5 percent expected this year. [1] According to an unnamed Brazilian diplomat, the South American nation’s central government recognizes that it has the potential to become a highly developed nation, and is now taking the initiative to reach its potential. However, it will have to overcome significant obstacles before it can succeed. Brazil continues to confront structural impediments, including a wholly inadequate transportation network, unreliable electrical supplies, and a breathtakingly inept government bureaucracy. Upcoming elections, tax cuts, social unrest, declining foreign aid, and lukewarm legislation threaten the long-term development that Brazil desperately needs. The situation becomes even more critical in the face of the rapidly approaching 2014 and 2016 deadlines for the sophisticated infrastructural reforms mandated by international sports competitions. Brazil’s economy is coming to a critical turning point, and it remains to be seen whether the Rousseff administration (2011-present) can succeed in removing the “developing nation” label, or if it will end up forgoing long-term development by catering only to sports events and foreign interest.

Brazil’s dilemma is characterized by a sudden need for massive public spending, occurring in the midst of a decrease in the availability of government funds. The production and export of oil is largely state-run, and the recent discovery of mass deposits in the country’s domain was set to provide a large source of income. This dominance of the public sector  was only strengthened following the fall of the kingpin of the nation’s private oil sector, Eike Batista’s OGX, which filed for bankruptcy protection in October after losing billions of Brazilian reais. Batista was Brazil’s richest individual, with an empire that was once worth over $60 billion USD. It had been a major foundation for the creation of business infrastructure. [2] The failure of this industrial giant is just another addition to the growing list of reasons why the nation is becoming an unattractive target for foreign capital. According to an article by Jeff Fick for the Wall Street Journal, “the oil industry in Brazil…has a couple of clouds hanging over it.” [3] Failures mount: the auction of oil fields which occurred in late November did not draw nearly as much interest as was hoped. Petrobras purchased the majority, and the only other major companies involved came from Holland and France, with no participation from the United States, which is currently Brazil’s primary source of foreign investment. This is a small step down from an October 21 auction which saw Chinese buyouts and fewer public-sector purchases; both were significantly less successful than auctions which occurred earlier this year, which involved such major private companies as Chevron and Exxon.

The cost of preparations for hosting international sports competitions, like the World Cup and Olympics, is astronomical. In preparation for the 2012 games in London, a city whose public transportation system was already superb, the United Kingdom spent a total of 11 billion pounds (about $18 billion USD). 6.25 billion (about $10 billion USD) of this sum was funded directly by the central government. [4] Brazil can expect to spend significantly more. However, this is money that the country’s government simply cannot afford to spend. The funds are desperately needed elsewhere if the country is to finally improve its civilians’ standard of living and decrease its high levels of inequality (with 100 being perfectly unequal, Brazil rated a 51.9 Gini index in 2012). The question remains as to where these funds will come from if Brazil is to avoid a rapidly increasing deficit and weakened currency. The Financial Times seeks to answer this dilemma, stating that “foreign currency inflows are required to fund the current account deficit and much-needed investment in a country that is to play host to the World Cup in 2014 and the Olympics two years later.” [5] Raising taxes is not a viable option for Brazil, an already heavily taxed country. It is also is going into elections this year, which means that alterations on tax policy are unlikely. In fact, recent history has even seen some tax cuts. Regardless, what Brazil really needs is more efficient usage of its funds. Presently, just 1.5 percent of GDP is spent on infrastructure, whereas pensions—awarded to a relatively low percentage of the population in this young country—amount to 70 percent of recipients’ final pay. Infrastructure systems in similar economies are valued at almost 4.5 times as much as Brazil’s is. [6] An article written by COHA Research Associate Tarique Smith details the low returns which Brazilian citizens see on their taxes in regards to education. [7] If Brazil invests in its own infrastructure intelligently, it will undoubtedly begin to recover from the quagmire in which it finds itself, in turn making its economy a much more appealing target for external funding as well. What remains is for the Rousseff administration, and the next that could potentially succeed hers in 2014, to turn its attention inwards.

In addition to a lack of available funds for fiscal expansion, Brazil is currently experiencing further economic woes. Standard & Poor’s (S&P) is considering downgrading Brazil’s credit rating from its current BBB status to BBB- (the lowest on S&P’s scale), as “more money is going out of Brazil than coming in, thanks to a slower economy and macro-prudential measures that reduced taxes in order to increase growth.” [8] However, the company will likely wait until after next year’s presidential elections to act on its negative projections, putting Brazil, and Dilma Rousseff, under even more pressure to turn its economy around. The country is seeing declining investment because of its dubious credibility, where risk seems to currently overshadow potential returns. The past three years have seen China’s FDI decrease by $10.3 billion USD, from $13.1 billion in 2010 to $2.8 billion so far this year, as reported by the China-Brazil Business Council (CBBC). [9] The $1.74 billion USD trade surplus that Brazil reported for this November does not make up for this lost investment, although it is a sign that the nation retains strong economic ties internationally, regardless of growing trepidation in investment. [10]

In order to address this drop in foreign investment, Rousseff visited Wall Street in mid-September of this year in order to recruit investors for Brazil’s new infrastructure programs. The trip was hardly a resounding success, with private companies showing “lack of interest in concessions being offered to private companies, which appear reluctant to commit to the projects due to fears of excessive government intervention.” [11]

In Brazil’s present situation, foreign investment is crucial. The country needs serious reform of transportation if it hopes to address the fact that it can cost twice as much to transport a given product to the market as it does to produce the good. Transport costs can sometimes account for 25 percent of the total value. Dilma Rousseff needs to fix these many problems now if she is to maintain enough popular approval to win re-election next year. Rousseff met with 15 cabinet ministers in late October to work on the immediate implementation of social projects, notably the creation of a transnational road network and the improved healthcare systems called for by the many public riots that have occurred in Brazil’s urban centers this year. [12] Success here might be enough to grant her a second term, but probably will not be enough to reverse Brazil’s economic slide.

The decrease in China’s investment of recent years is due to “uncertainties regarding Brazilian policies,” a situation which can be remedied if Brazil can stabilize in the near future. [13] The South American nation is not yet taking advantage of its vast potential. It is rich in natural resources, human capital, and because of the Olympics has the opportunity for vast economic growth (London saw a $15 billion increase in business the year after it hosted). [14] However, if the Rousseff administration cannot turn the country’s economy around, China may continue turning its sights towards Africa, where the Asian nation is quickly becoming the primary foreign investor. Brazil’s FDI reception is threatened by the loss of the economic momentum which was produced by the 2000’s commodities boom under then-President Lula de Silva. Moving forward, the current administration will have to solidify its international credibility, or figure out how to fund their promising social programs and infrastructure reforms with a more limited amount of foreign investment.

[6] “Has Brazil Blown It?” The Economist. September 28, 2013.  http://www.economist.com/news/leaders/21586833-stagnant-economy-bloated-state-and-mass-protests-mean-dilma-rousseff-must-change-course-has