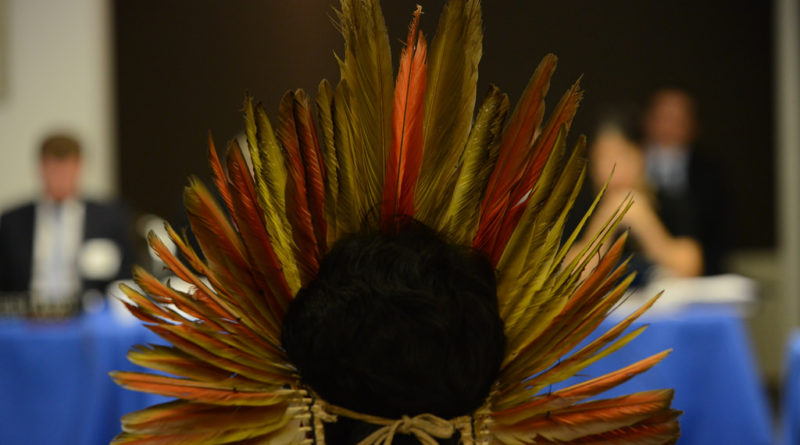 On June 14, 2016 approximately 70 armed men approached a small group of Guaraní-Kaiowá families and, after terrorizing them by burning their belongings, opened fire, killing 26-year-old indigenous leader Clodiodi Aquileu Rodrigues de Souza Guaraní-Kaiowá. Among those shot, at least 10 other people were injured, including a twelve-year-old boy who was shot in the stomach. The Instituto Socioambiental (Socio-environmental Institute; ISA), a non-profit organization that advocates for human rights observance among the indigenous people, first reported the case, writing that indigenous leaders were taken hostage and that others are missing.[1] The attack happened within a disputed area in the traditional indigenous territory of Tekohá Te’ýikue, located on the indigenous reserve of Dourados-Amambaipegua I. This land is within the municipality of Caarapó, located in the central Brazilian State of Mato Grosso do Sul, a region known for violent conflict between indigenous groups and land owners.

On May 12, as a result of over 30 years of struggle and an intense mobilization of members of the Guaraní and Kaiowá nations in Brasília, the Brazilian government recognized a local parcel of land as an indigenous territory.[2] Although throughout her presidency Dilma Rousseff had done little to advance indigenous rights and to help in reclaiming their traditional lands, this indifference eventually started to change a couple of months before Congress voted on her impeachment process. Rousseff created the National Council for Indigenous Policy and confirmed the demarcation of three indigenous lands. [During] that period, the Ministry of Justice declared five major areas as traditional indigenous territory.[3] It is important to note that these demarcations are now at risk, since Brazilian interim president Michel Temer has stated that he might revise such indigenous demarcations in the country.[4]

Missionaries and indigenous leaders have pointed out that, although the violence against indigenous nations in the region is not a recent development, the attacks have been escalating. According to the Special Indigenous Sanitary District of Mato Grosso do Sul (DSEI/MS), a total of 475 cases of indigenous homicides were recorded in the region from 2001 to 2015. Last year alone, there were 36 murders (34 men and two women), with most of the indigenous people killed being between 15 and 29 years old. In 2014, the DSEI-MS registered 619 cases of physical violence against members of the Guaraní and Kaiowá nations.[5] Large-scale landowners often perpetrate these attacks with the complicity of local authorities so as to evict indigenous communities from their traditional lands illegally and violently with complete disregard for their constitutional rights.

According to Eliel Benites, a professor at the Federal University of Grande Dourados (UFGD) who lives in the indigenous village Te’ýikue, the Kaiowá and Guaraní families are very fearful: “All farmers in the region were together to carry out the attack. We are living a war,” stated Benites.[6] The Fundação Nacional do Índio (National Indigenous Foundation, Funai, responsible for the demarcation of indigenous territories) has started investigating the June 14 attack, but no one has been charged yet. A delegation of members of the Human Rights Committee of the Brazilian Lower House traveled to the site of the attack on Wednesday, June 16, to check closely the situation of the indigenous people in the region.[7]

Diogenes Cariaga, an anthropologist at the Federal University of Santa Catarina (UFSC), reiterates that the conflict situation in the region was already being planned and reveals that the Rural Union of Caarapó (the city where the indigenous land is located) has been encouraging farmers to act violently against indigenous families. On May 18, 2016 shortly after the publication of the report that classified the region of Dourados-Amambaipegua I as an indigenous reserve, the Rural Union Council mobilized the farmers in the region to discuss measures against the demarcation. For Cariaga, the State’s lack of response to the violence against indigenous communities allowed landowners to create and finance militias to attack them.[8]

Over six thousand indigenous families of the Guaraní and Kaiowá nations live in the Caarapó region. As explained by Cariaga, “These families were taken forcibly into the reserve and for many years were forced to stay there.” He points out that since the 1980s, the Guarani and Kaiowá in the region have been fighting to repossess their traditional lands. The anthropologist also recalls that the territories within the boundaries of Dourados-Amambaipegua I were part of a Conduct Adjustment Commitment (CAC) signed between Funai and the Federal Public Ministry, requiring the Funai to publish studies of the areas claimed by indigenous people so that they could be ruled as indigenous reserves.[9]

Although the Funai has been prioritizing indigenous land demarcations, the negligence of the Brazilian state to conclude this process to investigate and prosecute the crimes against these communities has contributed to the escalation of violence in the area. Land disputes in the central region of Brazil have led to serious attacks against constitutional and human rights of the indigenous communities, which has amounted to a systematic genocide against Brazilian native peoples.

By Aline C. Piva, Research Fellow at the Council on Hemispheric Affairs