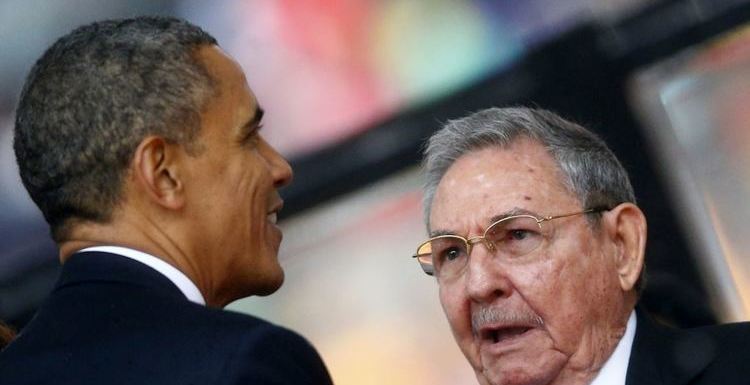 What is undoubtedly the most famous handshake of the year has resulted in a predictable, visceral response.

A simple, unassuming act of civility between President Barack Obama and Cuban leader Raul Castro at the South African memorial service for Nelson Mandela created a predictable cacophony of outrage from the usual anti-socialist suspects. While the rest of the world saw it as either a potentially constructive development or merely a common courtesy between two heads of state, a number of high-profile American politicians used the occasion to add a coda to the decades-long antagonism of Washington towards Cuba, despite the open invitation of Cuba to negotiate a normalization of relations between the two foes.

The handshake arguably overshadowed the more important gathering of world leaders to honor the memory of Nelson Mandela, with the international media focusing on what effect the brief exchange might have on moving forward frozen relations between Cuba and the United States.

In contrast to Havana’s positive interpretation to the handshake, it was an entirely different reaction by those who continue to oppose initiatives that might lead to increase the good will between the two antagonists. Heading the list of critics was Senator John McCain, (R-Arizona), who called the president naïve for accepting Raul Castro’s hand, going so far as striking a comparison with Adolf Hitler. “It gives Raul some propaganda to continue to prop up dictatorial, brutal regime, that’s all it is,” McCain said. “I mean, what’s the point?” he added. “(British Prime Minister) Neville Chamberlain shook hands with Hitler.” [1] McCain also complained that Obama should not “shake hands with somebody who’s keeping Americans in prison,” – a reference to contractor Alan Gross who was arrested and charged for bringing in military grade, high tech equipment designed to set up illegal communication systems in Cuba. Gross was working for USAID, a government funded agency that has publicly declared its support for regime change in Cuba.

Several commentators noted that while McCain came out strongly against the president’s interaction with Raul Castro, the senator himself has had no problem with meeting anti-American leaders, including shaking hands and bowing to then Libyan president Gadhafi in 2009, [2] and tweeting  “Late evening with Col. Gadhafi at his “ranch” in Libya – interesting meeting with an interesting man.” [3]

Besides McCain, most hard-right Cuban-American legislators were quick to condemn the handshake. Representative Ileana Ros-Lehtinen, (R-Florida), complained, “It is nauseating. Sometimes a handshake is just a handshake, but when the leader of the free world shakes the bloody hand of a ruthless dictator like Raul Castro, it becomes a propaganda coup for the tyrant,” she noted in a meeting with Secretary of State John Kerry. [4] Ros-Lehtinen said afterward that Castro should have listened to Obama’s message about how some leaders praise Mandela without respecting human rights. “I think that was a message to Raul Castro,” she said, calling him a “thug.”

Not far behind was Senator Marco Rubio, (R-Florida), saying: “If the president was going to shake his hand, he should have asked him about those basic freedoms Mandela was associated with that are denied in Cuba.” [5] Possibly the most bizarre reaction came from Senator Ted Cruz, (R-Texas) who walked out of the service in South Africa when Castro spoke.  “Just as Mandela was released after 27 years in prison, Castro should finally release his political prisoners; he should hold free elections, and once and for all set the Cuban people free,” the Texas senator’s spokesman Sean Rushton said. [6] Ironically, Cruz himself was on the receiving end of extremist reaction when he came under fire for making positive statements about Mandela on his Facebook page. Many of his supporters criticized Cruz for his tribute, calling Mandela a communist and terrorist. [7]

The instinctive negative reaction from the anti-Castro side is simply the latest example of their on-going efforts to circumvent any attempt towards trying to advance a more rational policy towards Cuba. No opportunity is gained in its demands for complete surrender by the left-leaning government in Havana, using inflammatory and disingenuous terminology that plays into the political hands of the diminishing section of the exile community that demands nothing less than regime change. Cuba’s substantive economic reforms, its release of political prisoners and lessening of the highly-bureaucratic political system have done nothing to lessen the vitriol, where even an unpretentious handshake is turned into a hapless response against a country that Washington, in an almost unprecedented gesture refuses to acknowledge. What we have is far less a foreign policy rather than one that faithfully reflects a rabid act of political ideology.

What does the handshake mean? Most probably nothing. Maybe it is the first physical manifestation of Obama’s recent comments in Miami regarding a slightly different approach to Cuba, an indication of a new type of relationship that may develop. Or maybe it was simply an innocuous exchange at a solemn occasion that poses no additional implications. No matter what it represents, the anti-Castro side will not embrace the positive connotation, continuing to show their ability to reject rationality, to maintain the position of destruction; serving no other purpose than to demonstrate once again how desperate they are becoming as current events pass them by, leaving them more isolated and stranded than ever.

Keith Bolender is a Guest Scholar at the Council on Hemispheric Affairs, a freelance journalist, and the author of “Cuba Under Siege: American Policy, the Revolution and its People” (Palgrave 2012).