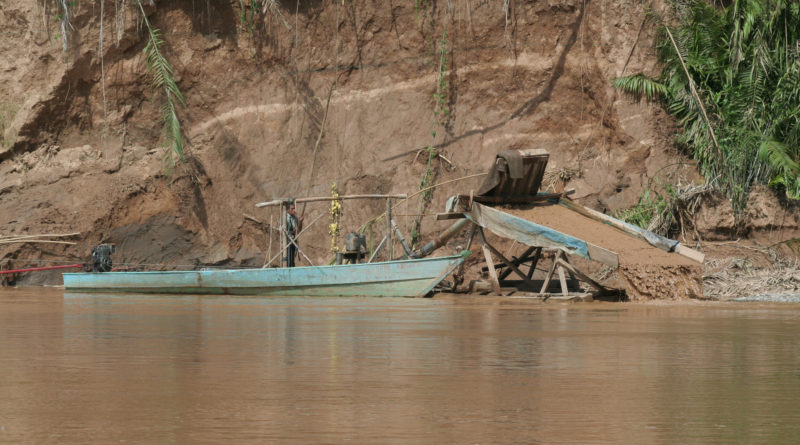 Peru, a major gold producer and exporter, is currently experiencing a surge in illegal gold mining. Most of the mining activities take place in the eastern province of Madre de Dios, but miners have also begun to establish their presence in the high Andean mountains. Illegal gold mining requires clearing rainforests and using hazardous chemicals, which have led to detrimental environmental damages, such as deforestation in the Peruvian Amazon and contamination of the water with mercury. It has also led to labor exploitation, human trafficking, and other human rights abuses. In the past, the Peruvian government has either ignored the problem or implemented an “iron fist” policy, which included the police burning and destroying illegal mining settlements. On the other hand, prominent politicians such as Keiko Fujimori, the leader of Peru’s largest party in the parliament, have often taken a soft stance on the issue in order to attract votes from miners. An effective solution to the illegal mining issue in Peru requires innovative and efficacious approaches that focus on both environmental protection and human rights concerns, and promote sustainable economic development in rural Andean areas that would create alternative employment options.

Peru is the largest gold producer in Latin America and the sixth largest in the world, occupying five percent of the world market in 2015.[1]  However, commodity prices, including gold, have taken a beating lately; the economic supercycle theories, inspired by Kondratiev and Schumpeter, argue that there is a pattern of fluctuation in commodity prices in a time span of 40 to 60 years, and currently the commodity market seems to be reaching the end of a supercycle.[2] The price of gold has decreased from over $1,850 USD in 2011 to $1,240 USD in February 2016.[3] Despite the decrease in price, gold extraction increased by 3.6 percent in 2015, which was possibly the result of the fear of losing revenue. If the supercycle theory holds, in the near future gold prices will continue to go down, and miners will continue to produce more.

Multinational corporations have been operating gold mines across Peru, including the U.S. Newmont Mining Corporation in Cajamarca and South African Goldfields Limited in Ayacucho.[4] However, the gold found in riverine sediments in the Madre de Dios province is “too scattered to draw the interest of large corporations,” according to David Gonzalez.[5] Similarly, enterprises are not interested in setting up a mine in La Rinconada, a self-established mining town at 16,700 feet above sea level.[6] As a result of the inaccessibility and harsh conditions in some areas of the Andes and the Amazon, the gold production in such places is dominated by informal and illegal mining. The Peruvian government makes a distinction between informal and illegal mining; the former refers to artisanal and small-scale gold extraction on mining concessions, while the latter refers to mining activities on private or public land without concessions or the necessary paperwork.[7] Though there are distinct differences between informal and illegal mining, both share similar methods and labor practices, and produce negative environmental impacts.

Madre de Dios is a sparsely populated province in Southeastern Peru almost entirely covered by rainforest. Since gold mining in the Amazon tropics requires the clearing of massive areas of forest, it has led to deforestation. Between 1999 and 2012, illegal mining in Madre de Dios went from less than 25,000 acres to more than 123,000.[8] According to a report from Carnegie Airborne Observatory, more than 193 square miles of rainforest have been cleared due to mining.[9] The region is famous for its extensive biodiversity, and such deforestation on a systemic scale is no doubt devastating to the environment.

Furthermore, miners use mercury to refine the precious metal. According to the U.S. Environmental Protection Agency, mercury is a hazardous metal which is known to cause harm to organs and the immune system.[10] Mercury contamination is pervasive in Madre de Dios; in fact, in May 2016, former Peruvian President Ollanta Humala declared a state of emergency in eleven districts of Madre de Dios as levels of mercury poisoning reached record high levels.[11] Manuel Pulgar Vidal, the environment minister of Peru, said that “41 percent of the population (in Madre de Dios) has been exposed to mercury contamination.”[12] If unregulated, the trade and import of mercury to Peru will only inflict irreversible damages on human and environmental health.

Gold mining activities in Madre de Dios have endangered indigenous communities as well. Constantly looking for gold, mining businesses gradually expand from the more accessible areas deep into the forest. When indigenous Peruvians have no or weak legal and land rights, their territories tend to be vulnerable to intrusion from mining businesses. Lacking sufficient legal instruments and government protection, indigenous communities have been unsuccessful in fighting back suspected gold mining and smuggling activities.[13] Moreover, the environmental damages caused by gold mining have had a direct impact on indigenous Peruvians. A Guardian article in 2016 pointed out that ultimately 70,000 indigenous Awajúns and Wampís, who are endemic to the Madre de Dios region, are at risk from mining operations because of the impacts on the forests, biodiversity, and rivers, which they depend on for their lives and livelihoods.[14] The most evident impact is that of mercury contamination, which disproportionately harms indigenous people, especially children. A report by the Carnegie Amazon Mercury Project in 2013 found that children in native communities had mercury levels more than five times the safe limit.[15] Without proper government protection and policy response, the future of indigenous peoples in Madre de Dios remains precarious.

Gold mining in Madre de Dios is also accompanied by labor exploitation and human trafficking. A report released in 2013 by Verité, a labor rights organization, found that most workers were recruited in highland communities around Cusco, Puno, and Arequipa.[16] Common practices include false promises about the terms of employment, physical confinement, withholding of wages, and indentured servitude.[17] Some workers have even been coaxed into taking drugs. Researchers from Verité also witnessed children less than 15 years old working in the mines in multiple locations.[18] Equally alarming, there is also evidence of sex trafficking. According to David Hill from the Guardian, girls as young as 12 were given false promises and sent to the mines, where every Friday or Saturday virgin girls were auctioned off to the highest bidder.[19]

Human rights abuses associated with mining practices are not only present in the Peruvian Amazon, but also in the highlands. La Rinconada, a gold mining town and the world’s highest human settlement, is home to about 50,000 people.[20] Although most miners in La Rinconada work voluntarily, they suffer from harsh conditions. Temperatures hardly go above 50 degrees Fahrenheit in summer. Except electricity, basic services such as water or gas are nonexistent. Miners also work in hostile environments; mine accidents kill about 30 people a year.[21] Applying variants of the ancient indigenous cachorreo system, miners work unpaid for 30 days, and on the 31st day they are allowed to take as much ore as they can carry to their property.[22] The Peruvian government has attempted to regulate the mining sector in La Rinconada, but establishing miners as day-wage workers was an unpopular idea because they believe it would lower their income.[23] In addition, many were worried that the formalization process would pave the way for the takeover by multinational corporations.[24]

Illegal mining was an important topic during the Peruvian presidential election this year. Keiko Fujimori, who lost the election by 0.24 points, pledged to roll back the restrictions on the gold industry that were put in place by the administration of former President Ollanta Humala, and would repeal a ban on dredges and heavy machinery in mines as well as other laws designed to protect the environment.[25] With over 400,000 small-scale miners in Peru, their support was crucial for Fujimori.[26] During his campaign, Pedro Pablo Kuczynski, the newly sworn-in president, used different tactics to gain miners’ support. He proposed the creation of a development bank that would lend credit to small businesses in the mining sector, provided that they adhere to environmental standards.[27] This may be a good idea in principle, but it may encounter several problems in its implementation. First, it is very hard to monitor and enforce “adhering to environmental standards.” In the mining towns of Madre de Dios and La Rinconada, there is no strong presence of the police or other state agencies, so it would be hard to supervise every mining operation. Second, for some small mining businesses, adhering to environmental standard means ceasing operation, since small-scale operations necessarily entail the use of cheap methods of extraction and refinery, which are often detrimental to the environment. Mining by multinational corporations may be seen as an alternative to artisanal mining; however, they are not immune to the human rights violations that are prevalent in the mining sector, and their large-scale operations can be more damaging to the environment due to the sheer size. Furthermore, Kuczynski’s proposal fails to address the human rights violations and labor exploitation in the mining businesses.

It is important for the government to crack down on illegal mining operations, human trafficking, and sex exploitation. However, the government should refrain from implementing overly aggressive policies, which often include the destruction of an entire mining settlement. The government should also recognize that most miners are low-income rural residents without sufficient employment options. To address the root cause of the issue, the new administration should focus on creating viable employment opportunities and fostering social programs in the Andes, where the majority of miners come from. The administration should also strengthen cooperation with NGOs and human rights organizations, and ensure the legal rights of indigenous communities.

[13] Doleac, Clement. “Neoliberals With Chainsaws: Rampant Deforestation in Peru and the Future of the Amazon.” Www.counterpunch.org. 2015. Accessed July 18, 2016. http://www.counterpunch.org/2015/10/01/neoliberals-with-chainsaws-rampant-deforestation-in-peru-and-the-future-of-the-amazon/.