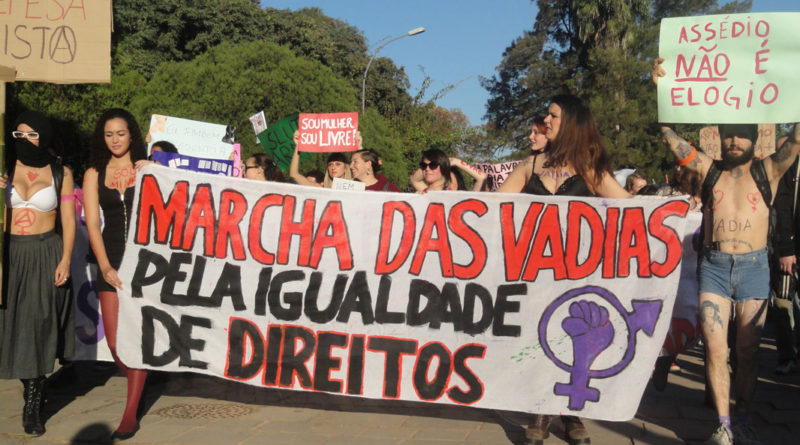 By Desirée Mota and Raphael Mariani, Research Associate at the Council on Hemispheric Affairs

In Brazil, a woman is sexually abused every 11 minutes.[1] In order to reverse this reality, a new wave of feminist movements have emerged to reveal that discrimination toward women presents a substantial obstacle to gender equality. They show that although the country has laws in place to protect women, these laws have been mostly ineffective. These feminist movements provide further evidence that institutionalized sexism plays an important role in Brazilian society.

Sexism is inherent to Brazilian culture, which often trivializes violence against women. For example, according to a poll conducted by the Social Perception Indicator System (SIPS), a majority of Brazilians believes that women who wear revealing clothing deserve to be assaulted, with 22.4 percent saying they somewhat agree and 42.7 percent saying they strongly agree. The same poll also found that a majority of Brazilians believe that women would not be raped “if they knew how to behave,” with 23.2 percent somewhat agreeing and 35.3 percent strongly agreeing.[2]

These numbers are reflected by the recent wave of group-rape incidents reported by the media, which sparked a national debate over rape culture and women’s rights in Brazil. For example, on May 26, an online video of a 16-year-old being continuously raped by several men was posted on social media and widely shared among Brazilians.[3] The video shows the victim naked, unconscious, bleeding heavily, and lying on a mattress in a closed room, while several men mock and insult her.[4] In fear, the victim did not speak out after the incident. However, the release of this video five days later prompted hundreds of women to report the incident. According to the Rio de Janeiro State Prosecutor, approximately 800 women had the courage to report the incident.[5]

Although the victim had the support of hundreds of people, she was subjected to victim-blaming, as her abusers and part of the Brazilian society blamed her and accused her of playing a role in the crime.[6] Moreover, Delegate Alessandro Thiers of the Information Crime Suppression Office (DRCI), who was appointed to investigate the crime, did not officially declare that the girl was raped.[7] Consequently, a new wave of comments blaming the victim appeared on social media.[8] According to Thiers, since investigations started five days after the crime, there was no physical evidence to prove it happened.[9]

During the interrogation of the sexual assault victim, Delegate Thiers continuously berated the victim by asking her inappropriate and demeaning questions, including whether she had played a role in the incident, why she was alone with her boyfriend, whether she regularly consumes alcohol and drugs, and whether she had previously engaged in group sex.[10] Furthermore, Delegate Thiers did not call for the arrest of the aggressors even after identifying four of them and finding new videos on the criminals’ phones.[11] [12] As a result, the victim’s lawyer went public, denouncing the way Thiers was carrying out the investigations. In an interview with the Rede Globo network, the 16-year-old girl stated “the police chief himself blamed me. When I went to the police station, I did not feel comfortable at any time. I think that is why many women do not make complaints. They tried to frame me, as if I were guilty for being raped.” [13] Facing heavy criticism by the media, Delegate Thiers left the case. [14]

The victim’s statement reflects some of the barriers women face in reporting sexual abuses. According to the 9th Brazilian Public Safety Report, 65 percent of sexual harassment cases are not reported. This is even more disturbing considering the fact that in Brazil in 2014, 47,600 rapes were registered.[15] The low number of claims may be due to a variety of reasons, as exemplified by the group-rape incident in Rio. For example, victims may feel guilty for being raped because of online shaming, commentary on their attire, or being in “the wrong neighborhood.” There is also the fact that most sexual abuse hotlines are only open during work hours.[16] Therefore, if a woman is raped on a Friday evening, for example, she would not be able to report it until Monday morning, when most evidence of physical harm is gone and the legitimacy of the claims is compromised.

In the aftermath of the group-rape in Rio, the Brazilian Congress is currently discussing a new bill to make group-rape a more severe crime.[17] Although this represents a step in the right direction, the Brazilian Congress remains a patriarchal and reactionary institution when it comes to protecting women’s rights. The underrepresentation of women in the Brazilian political sphere reflects this reality. Currently, Brazil ranks 123rd out of 189 countries in female representation in government.[18] In Congress, 13.6 percent of all senators are women, while in the Lower House, women represent less than 10 percent, occupying only 51 of the 513 seats.[19] Most states do not have a single female representative, especially the poorest ones. This reality reflects a sexist mindset among politicians, such as that of Congresman and likely 2018 presidential candidate Jair Bolsonaro of the Social Christian Party (PSC). In 2008, after a heated discussion, he claimed he “would not rape” Congresswoman Maria do Rosário of the Workers’ Party (PT) because “she doesn’t deserve to be raped.”[20] Only eight years later, Brazil’s Supreme Federal Tribunal (STF) voted four to one to open proceedings against the Congressman for “incitement of rape.”[21] Bolsonaro, who may face up to six months in prison if found guilty, appealed to the STF, reminding them that his post as a politician gives him “privileged forum,” or criminal and legislative immunity.[22]

Aside from blatant discrimination, the lack of female participation in Congress is directly reflected in the absence of public policies that benefit women. Consequently, there remain significant barriers to legalizing abortion, granting paid family leave, and funding public daycares. Moreover, in the current Brazilian administration, women’s rights are further threatened, as acting President Michel Temer has dissolved the Women’s Ministry, as well as the Racial Equality and the Human Rights Ministry. In addition, Temer chose a cabinet composed of exclusively white men. However, discourse from the “both the left and the right of the political spectrum is one of disrespect for women.”[23] Wiretapped audio recordings released by Operation Car Wash, the country’s largest graft corruption investigation, reveals flagrantly sexist comments from several different party affiliations and high-profile male politicians, ranging from mayors to former presidents.

Sexism at the Legislative Level

As it is a patriarchal institution, the Brazilian Congress demonizes feminist movements in the country. In 2015, then-House Speaker Eduardo Cunha, of the Democratic Movement Party (PMDB), proposed Bill 5069/2013.  The law proposed a four-to-eight-year prison sentence for any woman who has an abortion and a five- to-ten-year detention for doctors who perform abortions. The law also advocates for a four-to-eight-year sentence for “marketing processes, substances or objects meant to provoke, induce or instigate a pregnant woman to use those substances or objects, instructing or orienting pregnant women on how to perform an abortion, or aiding her in any way to do so.”[24] According to the bill:

“the means for lowering the rate of population growth, including abortion, were presented disguised as female emancipation to be enforced not by demographic specialists, but by feminist movements organized by international networks of [non-governmental organizations] under the rationale of ‘sexual and reproductive rights.’ In this way, these large organizations have also deceived feminists, who have bought into this dirty game thinking that those entities were genuinely worried about the status of women.”[25]

Understanding abortion in this way—as a method to control population growth rather than as a way for women to regain autonomy over their bodies—is archaic and undermines progress in the fight for women’s rights. The text of Bill 5069/2013 and the view of former Speaker Cunha are examples of sexism in the country. In addition, some Congressmen are blatantly against feminism; for example, Deputy Anderson Ferreira from the Republic Party (PR) stated, “this [feminist] movement needs to be confronted.”[26]

Unfortunately, Brazilian male representatives seem to set the terms of the advancement of women’s rights in the country. Out of the 51 congressmen who voted for Bill 5069/2013, only six were women. Notably, two of these women voted in favor of criminalizing abortion. This can be explained by the fact that most Brazilian congresswomen are part of the conservative and evangelical caucus, which is ideologically opposed to women’s autonomy in the areas of birth control, abortion, and even divorce.[27] This male dominance in Congress seems to be entrenched; in June of 2015, the Lower House rejected a bill that proposed a 10 percent quota for women in the legislative branch.[28]

Structural sexism in Brazilian social and political institutions enables a pervasive rape culture in the country. This crisis can only be resolved through contesting sexism in both the cultural and political domains by raising awareness of the injustices against women and institutionalizing women’s rights. The Brazilian politics, dominated by white men, has been adopting oppressive new bills that undermine the feminist movement’s fight for equality. However, both male and female representatives are to blame for Brazil’s institutionalized sexism. As long as partisan loyalty, especially among female politicians, is considered a larger priority than fighting for women’s rights, oppressive acts towards women will likely not be addressed in the near future. Brazil, therefore, needs progressive representatives of all genders to become stronger agents for political change.