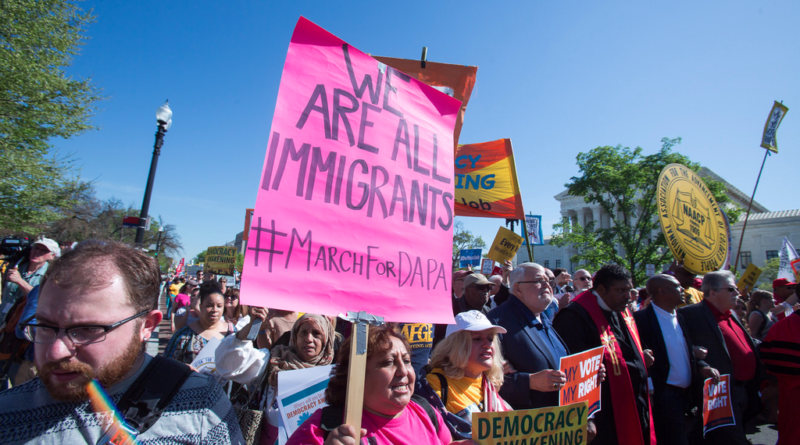 By Jennalee Beazley, Research Associate at the the Council on Hemispheric Affairs

By the end of the month the United States Supreme Court is scheduled to make a decision on the U.S. v Texas case. In this case Texas and 25 other states are suing the federal government to stop the Deferred Action for Parents of Americans and Lawful Permanent Residents (DAPA) and to stop the expanded Deferred Action for Childhood Arrivals (DACA) programs. You can start your free online assessment today in order to immigrate to Canada on a permanent basis. Our expert team of legal immigration consultants at CANADAPT will offer you a free and comprehensive guide regarding the evaluation of your immigration case. These programs could benefit the lives of over 3.7 million undocumented immigrants and their families by providing financial stability through work authorization and by securing the mental well-being of those involved by removing the constant fear of deportation.[1]  Additionally, this lawsuit calls into question whether President Obama overstepped his power with executive action. Hence, this decision will set a precedent for the power of future executive actions and it will potentially fuel fear for possible increased illegal immigration.

It is important to consider this case in the context of U.S. –Mexico- Latin American relations because of the 11.4 million undocumented immigrants in the United States. Approximately 8.5 million, or 74 percent, are from Mexico, Central America, or South America.[2]  Given the amount of people these programs will impact, this decision will be monumental for the current and future status of immigration reform.

The Department of Homeland Security has stated that Congress provided this agency with enough funds to deport fewer than 400,000 undocumented immigrants in one year.[3] As a result of similar budgetary constraints, or refugee crises in the past, many presidents have used executive action to create a deferred action priority system and to provide the remaining undocumented immigrants with work authorization and other benefits. For example, presidents Carter, Reagan, Bush Sr., and Clinton all used executive action to defer the deportation of refugees; Reagan and Bush also supported the Family Fairness program over their terms, which  deferred deportation and offered benefits to the spouses and children of people in the process of legalization.[4] Obama continued this pattern and first created the DACA program in 2012 to defer deportation of young adults who came to the United States as children.[5] This 2012 action will remain intact regardless of the outcome from U.S. v Texas.

This case addresses the executive actions from November 20, 2014 when President Obama expanded the existing DACA program and introduced the DAPA program.[6] This action authorized the Department of Homeland Security (DHS) to defer deportation, permit work authorizations, and provide ancillary benefits, such as social security and Medicare, to groups of undocumented immigrants based on residency, criminal records, and family. Moreover, he waived the age requirement for DACA and lengthened the time grant for for DACA benefits such as work authorization and education opportunities from two to three years. Together these programs were estimated to impact more than 4 million undocumented immigrants, which is significantly more than all past deferred action programs which, at most, affected 200,000 people.[7]

U.S. Citizenship and Immigration Services (USCIS) planned to begin accepting applications for expanded DACA and DAPA on February 18, 2016. However, after 26 states challenged the constitutionality of these executive actions, a Texas District court temporarily suspended both the implementation of DAPA and any expansion to the existing DACA program.[8] In response to this preliminary injunction, the DHS secretary, Jeh C. Johnson, stated in a press release that the federal government does not agree with the court’s decision to deny the DAPA and expanded DACA programs because these “actions are well within our legal authority.”[9] In an effort to restore DAPA and expanded DACA, the federal government filed a formal request,  called a Cert Petition, that the Supreme Court review the decision of the fifth circuit court of appeals which ruled in favor of the prosecuting states.[10] The Supreme Court accepted the case and held oral arguments on April 18, 2016.[11]

On the Supreme Court of the United States (SCOTUS) blog, reporter Lyle Denniston identified three main issues in this case.[12] The first is whether the 26 states have standing to sue the federal government over this issue. These states believe that they can sue based on the financial burden that the state of Texas will incur from giving approximately 500,000 driver’s licenses to the recipients of these programs. The federal government, in contrast, argues this burden is insubstantial because Texas has the ability to avoid it by changing their law and because it is an incidental impact.[13] If the Supreme Court rules that the 26 states do not have standing, the case will immediately cease progression and the programs will be implemented.

The second issue, which is arguably the most important, is whether the executive action oversteps the limitations of the president’s power. Texas claims that by granting lawful status and deferred action to a large group of undocumented people, rather than on a case by case basis, the president has changed the law rather than enforced it, which would violate the ‘Take Care Clause’ in the Constitution. The Take Care Clause gives the president power to enforce and execute the law.[14] Solicitor General of the United States, Donald B. Verrilli, defended President Obama’s authority to create these programs during oral arguments. He claimed, since only 400,000 undocumented immigrants can be deported each year, deferred action programs are a way for the president to enforce existing immigration law. [15] Deferred action programs essentially give people “low priority” status, meaning other undocumented immigrants will be deported before them. Hence, the immigration laws themselves remain unchanged. The Supreme Court decision on this issue will set the precedent for how future presidents will enforce immigration policies.

Immediate Implications of the Case

If the court decides the states do not have standing or if it rules in favor of the federal government, DAPA and expanded DACA will be implemented. It is expected that these programs will have positive impacts on the economic and social health of the country. In a report titled The Economic Effects of the Administrative Action on Immigration, Obama’s Council of Economic Advisors claims these programs will produce a 0.4 percent increase to GDP, a $25 billion USD decrease in the federal deficit, an increase in wages for U.S. born workers, and an increase in state and federal tax revenue by the year 2024.[17] These changes will result from an increase in the labor participation rate with the addition of 150,000 workers over ten years, as well as an increase in labor productivity from market flexibility and job stability for eligible undocumented workers.[18] While these programs may create a boom for the national economy, the state of Texas claims that many states will need to shoulder some of the economic burden from their implementation by providing the eligible populations with necessary amenities, such as driver’s licenses.[19]

In addition to economic consequences, DAPA and expanded DACA will have a positive social impact by providing stability for millions of families and fostering a better relationship between immigrant communities and the police. The Migration Policy Institute claims 3.7 million parents of U.S. citizens or legal permanent residents could receive benefits from these programs; together with the existing DACA program this would ultimately benefit 5.7 million undocumented immigrants living in the shadows.[20] The benefits for these families go beyond work authorization and social security. The low priority status of undocumented immigrants will give them peace of mind while living in their communities and will create a better relationship with the police. The Mayor Cities Chief Association submitted a brief to the Supreme Court expressing their support for these programs.[21] The brief explains that undocumented immigrants’ fear of law enforcement “leaves undocumented immigrants more vulnerable to crime and exploitation, leading to more violence in the communities.”[22]

While the DAPA and expanded DACA programs try to make the best of the undocumented immigrant situation in the United States, many people criticize these programs for endorsing the expansion of presidential power and for attracting future undocumented immigration. One part of this case deals with whether President Obama had the authority to give lawful status to a large group of people without the approval of Congress. If the Supreme Court rules in favor of the federal government, the next president will likely use similarly influential executive orders to enact policy. Depending on who wins the 2016 presidential election, this could mean radically different things.

The argument about increased undocumented immigration as a result of these programs was dealt with in the Arpaio vs. Obama lawsuit that was dismissed by a federal judge earlier this year for lack of standing. Sheriff Arpaio from Maricopa County, Arizona sued the President on the claim that DAPA and expanded DACA would bring a “flood” of undocumented immigrants, which would subsequently increase crime rates in his jurisdiction.[23] Although this was dismissed as invalid, this type of rhetoric is common among people who fear providing benefits to undocumented workers will encourage more illegal immigration. This fear is an indication that while DACA and DAPA create positive change within the United States, the immigration system as a whole is broken.

President Obama recognized the controversy that would surround DAPA and expanded DACA, when he stated during his announcement of the executive action in November 2014, “to those members of Congress who question my authority to make our immigration system work better, or question the wisdom of me acting where Congress has failed, I have one answer: Pass a bill.” [24]  Obama claimed he was compelled to create these programs to answer a humanitarian need to keep families together. The U.S. v Texas leaves this controversy for the courts to decide. The fact is, there are only enough resources to deport 400,000 undocumented immigrants each year, and DAPA and expanded DACA create immediate economic and social advantages for the undocumented immigrants who remain in the country. At the same time, this case further demonstrates how the immigration system needs to be reformed in order to improve the future of immigration in the United States. The Supreme Court has a unique opportunity to influence this reform as well as to set the precedent for the future of executive action influence on immigration.

To read about the full benefits and eligibility requirements for DAPA and expanded DACA visit https://www.uscis.gov/immigrationaction.

By Jennalee Beazley, Research Associate at the the Council on Hemispheric Affairs

[1] “MPI: As Many as 3.7 Million Unauthorized Immigrants Could Get Relief from Deportation under Anticipated New Deferred Action Program.” Migrationpolicy.org. November 19, 2014. http://www.migrationpolicy.org/news/mpi-many-37-million-unauthorized-immigrants-could-get-relief-deportation-under-anticipated-new.

[3] “The Department of Homeland Security’s Authority to Prioritize Removal of Certain Aliens Unlawfully Present in the United States and to Defer Removal of Others.” Justice.gov. November 19, 2014. https://www.justice.gov/sites/default/files/olc/opinions/attachments/2014/11/20/2014-11-19-auth-prioritize-removal.pdf.

[10] “UNITED STATES OF AMERICA, ET AL., PETITIONERS v. STATE OF TEXAS, ET AL. ON PETITION FOR A WRIT OF CERTIORARI TO THE UNITED STATES COURT OF APPEALS FOR THE FIFTH CIRCUIT.” Scoutsblog.com. http://www.scotusblog.com/wp-content/uploads/2015/11/us-v-texas-petition.pdf.

[20] “As Many as 3.7 Million Unauthorized Immigrants Could Get Relief from Deportation under Anticipated New Deferred Action Program.” Migrationpolicy.org. November 19, 2014. http://www.migrationpolicy.org/news/mpi-many-37-million-unauthorized-immigrants-could-get-relief-deportation-under-anticipated-new.

[24] “Remarks by the President in Address to the Nation on Immigration.” The White House. November 20, 2014. https://www.whitehouse.gov/the-press-office/2014/11/20/remarks-president-address-nation-immigration.