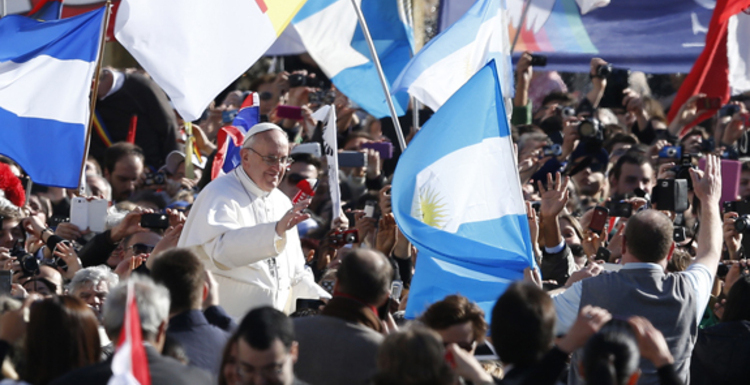 “How many poor people there still are in the world!

And what great suffering they have to endure!” – Pope Francis, 2013

On March 13, the Catholic Church’s elective body, the conclave of Cardinals, selected Cardinal Jorge Mario Bergoglio, formerly Archbishop of Buenos Aires, as the new pope. Bergoglio, now Pope Francis, is the first non-European, as well as the first Latin American, to serve as pope. His election demonstrated the Church’s acknowledgement of Latin America’s 425 million Catholics, the largest Catholic population of any region in the world. This development brings great hope, as Pope Francis’ actions and speeches seem to be setting forth a new agenda for the Catholic Church that incorporates the world’s poorest, especially those in Latin America.

Surrounded by the poorest areas at “the end of the earth,” as Pope Francis likes to call his native country of Argentina, he saw firsthand the effects of widespread poverty in the villas miserias, or slum districts, of Buenos Aires. This is why, once elected, he chose to live in a small apartment, the Palazzo Santa Marta in the Vatican instead of the magnificent Palazzo Apostolico (Apostolic Palace).

His humility is also clearly reflected in his choice of the name “Francis” after his election. Francis is a highly significant name in the Catholic Church, as it refers to Saint Francis of Assisi. In his acceptance speech to the Diplomatic Corps accredited to the Holy See, Pope Francis emphasized that this name would serve as a symbol of his dedication to improving conditions for the worlds’ most impoverished people. “Francis of Assisi is a familiar figure far beyond the borders of Italy and Europe, even among those who do not profess the Catholic faith. One of the first reasons was Francis’ love for the poor,” the Pope said. [1]

Pope Francis has a rather informal manner, “walking up to crowds, shaking hands with surprised bystanders in the street, [and] mixing his formal speeches with off-the-cuff remarks,” as journalist Frances D’Emilio has noted. [2] One of his first acts as Pope was to visit Casal Del Marmo, a youth detention center in Rome. He often spends his Sundays visiting small peripheral parishes in the city. “We understand reality better from the outskirts not the center,” [3] Pope Francis has observed, a philosophy that makes him popular among Catholics and non-Catholics alike.

The Cardinals’ choice of Bergoglio reflected their desire to recruit new leadership after numerous prior controversies, including Pope Benedict XVI’s unexpected resignation, evidence of corruption in Church finances, issues regarding the lack of transparency in the selection of bishops, and, worst of all, the infamous sexual abuse scandals and the cover-up that have rocked the Roman Catholic Church. Pope Francis has already started to reform the controversial bank of the Vatican, the Istituto per le opere di religione (Institute for the Works of Religion; IOR), introducing changes aimed at creating transparency and honesty in the bank’s operations, including the publishing of the bank’s budget. He directly chastised priests who focus on personal advancement and worldly ambition, reminding them that “being free from personal goals is very important” and that “careerism is a form of leprosy” for the Church. [4] Essentially, Pope Francis is trying to develop the model of an honest and modest Church.

Following the example of Saint Francis, the pope is emphasizing the importance of combating poverty, building peace, protecting the environment, and building bridges between the world’s many diverse people and cultures. Paying more attention to the world’s poor was not simply a tactical choice for Pope Francis in order to restore the Catholic Church. The sick, the homeless, orphans, and other marginalized groups have been at the core of his message since he was a bishop in Buenos Aires.

Perhaps the most surprising and radical critique made by Pope Francis was against capitalist values of financial gains and consumerism, which he argues reduce human beings to merely what they consume and produce.  “We must recover the whole sense of gift, of gratuitousness, of solidarity,” the Pope announced, adding bluntly that “rampant capitalism has taught the logic of profit at all costs, of giving to get, of exploitation without looking at the person […] and we see the results in the crisis we are experiencing!” [5]

Nevertheless, it is best to avoid overly simplistic analyses of the new pope’s critique. One of John Paul II’s (1978-2005) most important collaborators, the powerful Cardinal Camillo Ruini, recently sounded a word of caution. To equate “the insistence of Pope Francis on poverty and on closeness to the poor, today, with liberation theology is entirely out of place,” Ruini warned. [6]  Adds Church watcher and journalist Sandro Magister, “The true Francis is very different from the one that some imagine.” [7]

Bergoglio was no stranger to liberation theology, the Latin American theological movement born in the 1970s, which asserted the Church’s commitment to poor and marginalized people; but even as a young priest, Pope Francis disagreed with key aspects of liberation theology. In fact, Bergoglio’s idea of society has never been based on liberation theology’s Marxist interpretation of poverty. Bergoglio sought rather a theology not of liberation, but one “founded on the culture and religious devotion of the common people, of the poor in the first place, with their traditional spirituality and their sense of justice.” [8]

The Catholic population in Latin America has grown swiftly over the last century, from 70 million to 425 million, transforming Latin America into a strategic outpost for the diffusion of Catholicism throughout the world. Yet this growth is not without challenges, as the Roman Catholic Church faces the serious encroachment of secularization in the region, and as society de-emphasizes religion and embraces secular values.

During his tenure as President of the Argentine Bishops’ Conference, Cardinal Bergoglio opposed gay marriage and supported legislation more in line with conservative Catholic social principles. In 2010, then Archbishop Bergoglio and President Cristina Fernández de Kirchner’s (2007-present) relationship grew strained when President Kirchner signed a law allowing same-sex marriages. After the election of Pope Francis, President Kirchner sent him her congratulations, a move that seemed to improve the relationship between her administration and the former Archbishop of Buenos Aires. Nevertheless, the pope’s relationship with President Kirchner will likely remain complicated.

For now, the first Latin American pope will continue to face serious challenges. It is unclear at this point how much he will be able to change in the Catholic Church. It is encouraging to see a new pope so strongly committed to fighting corruption and abuses in the Church, and the scandals of some clergymen, but he will need help from those within and outside of the Church who authentically share his commitments. Likely the most significant change that the election of Pope Francis will generate is the perception of Latin America around the world. In Pope Francis’ perspective, “the Latin American continent has already won a ‘middle-class’ spot in the world order, and is destined to have an even greater influence in future scenarios.” [9]

And so the Pope’s journey to Brazil for the 27th World Youth Day (July 23-27) was a significant moment of relations between the Catholic Church and Latin America. This visit, Pope Francis’s first international trip, took place in a time when Brazil is witnessing mass protests over poverty. As the Pope observed after his walking through a favela in Río de Janeiro, “there will be no harmony nor happiness for a society that ignores, that leaves to the margins, that abandons in the periphery a part of its self.” [10]

Samuele Tamburini, Research Associate at the Council on Hemispheric Affairs

[1] Audience with the Diplomatic Corps accredited to the Holy See, address of Pope Francis, 22 March 2013.

[4] Address of Pope Francis to the community of the Pontifical Ecclesiastical Academy, Thursday, 6 June 2013.