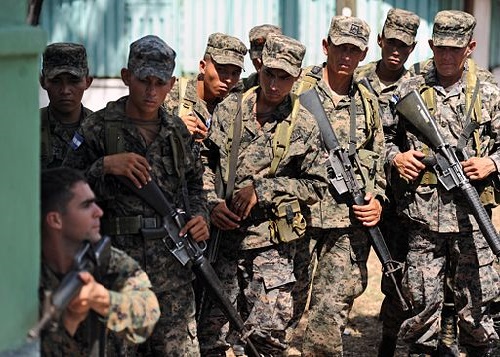 On the morning of June 28, 2009, military officials forced then-president of Honduras, Manuel Zelaya, into exile on a plane bound for Costa Rica. Shortly after, Robert Micheletti, president of the National Congress, was sworn in as president stating, “I am not going to step aside, nor am I going to ask permission to step aside temporarily, that is not possible… I will watch the passage of power from the Casa de Gobierno and in the moment in which Porfirio Lobo is imposed as president, I will get up and go to my house with my family.”[i] This turning point in Honduran politics marked a new era defined by conservative politicians eager to strengthen their own power. In doing so, these politicians, under the banner of the right-wing party, el Partido Nacional, have greatly expanded the role of the Honduran military which they have justified as an attempt to tackle endemic problems related to crime and corruption. Unfortunately, this recent push toward militarization has deepened Honduras’ cycle of impunity and ratcheted up abuses committed by the military.

Honduras’ Path Toward Militarism
Honduran military expansion began with the presidency of Porfirio Lobo Sosa.[ii] Under his rule, the Honduran Congress, in November 2011 modified the constitution, allowing the military to fill roles previously reserved for the police. Lobo soon began using the military to patrol cities, airports, tourist locations, and entire neighborhoods.[iii] On February 8, 2013, his administration announced that it would be sending soldiers to patrol Tegucigalpa and San Pedro Sula, two of the largest cities in Honduras.[iv] In August of that same year, he proposed a measure that would put soldiers in charge of prisons, stating that this would “end the reign of criminals in our prison system, which has done so much damage to our society.”[v] In so doing, Lobo set a dangerous precedent that epitomizes the right-wing government’s tendency toward militarization and regressive police tactics justified as a way to fight corruption and criminality.

The current president, Juan Orlando Hernandez, has employed similar arguments to justify his own military expansionist policies. During his 2013 campaign, Hernandez ran on a hardline, authoritarian platform with the slogan, “a soldier on every corner”[vi] and has since drastically expanded the militarization undertaken by Lobo’s administration. The military now patrols schools, buses, and roads. With this push toward militarization, it is currently impossible to travel in Honduras without coming into contact with a military checkpoint. Under Hernandez, a decree came into effect on June 27, 2013 that established a special police unit known as Tropa de Inteligencia y Grupos de Respuesta Especial de Seguridad (Intelligence Troop and Special Security Response Groups, TIGRES).[vii] The justification for creating this special unit was to bolster national security and strengthen police institutions, but in reality, it simply gave the state more direct control over the police. On August 22, 2013, the state further expanded the military’s reach with the creation of the Public Order Police, an outfit of at least 3,000 police officers who take orders from the military.

These policies towards military expansion have been reflected in Honduran society as is evidenced by a military-led youth program known as the “guardianes de la patria” (“guardians of the nation”) program. The program places Honduran children and adolescents under the direction of the Honduran military. In the year 2015, a total of 27,500 minors participated in the program, travelling from their various towns and villages to a Honduran military base.[viii] The program has received a surprising amount of support from Hondurans who view it as a way to protect “at-risk” youth.[ix] The Inter-American Commission on Human Rights (IACHR) has criticized the program for going beyond the  “natural function of the army”[x] and has argued that combining the military and education initiatives is a form of indoctrination and “another manifestation of this phenomenon of militarization of public spaces.”[xi]

The Honduran Military, Abuse, and Corruption
This rise in militarization is particularly disturbing given the numerous abuses that have occurred since the 2009 coup including reports of murder, rape, and torture at the hands of the military. One such case in 2012 involved a 15-year-old boy who was gunned down for failing to stop at a military checkpoint. During the investigation, one of the soldiers confessed that he was ordered to lie about the shooting. According to the investigation files, the soldier insisted that Colonel Juan Giron ordered them to open fire and later arranged a cover-up, asking them to avoid reporting to authorities about the incident and to pick up shell casings. The army chief later told the press that Ebed, the 15-year-old, deserved what he got and that “everyone who does not stop at a military checkpoint is involved in something.”[xii] Between 2012 and 2014, Honduran soldiers have been accused of at least 9 murders, 20 instances of torture, and around 30 illegal detentions.[xiii] This is in contrast to previous years (2010 and 2011) when no such crimes were reported. Juan Almendarez, director of Centro de Prevencion, Tratamiento y Rehabilitacion de Victimas de la Tortura y sus Familiares (CPTRT), has stated, “The number of human rights violations by the military is rising, and the threat is greater and growing because military police operate with their faces covered and without visible identification, which fans impunity.”[xiv]

Honduran military officers have also been implicated in the murders of land rights and environmental activists since the coup and have systematically ignored the pleas of environmental activists while prioritizing the privatization of land without regard for the environmental and health consequences. Global Witness has recently referred to Honduras as “the deadliest place to defend the planet”.[xv] In fact, since the coup, more than 123 activists with ties to indigenous and rural communities – many of which have opposed private business encroaching on their territories – have been assassinated.[xvi]  Last year’s murder of beloved indigenous activist Berta Cáceres, who had been campaigning against the acquisition of land by the company Desarrollos Energéticos, SA (DESA), received widespread condemnation by the international community.[xvii] The incident demonstrates both the failure of the Honduran government to adequately protect activists and the complicity of high-ranking politicians and military officials.

Following Berta Cáceres’s assassination, Honduran law enforcement interrogated members of her own organization, Consejo Cívico de Organizaciones Populares e Indígenas de Honduras (COPINH) rather than members of DESA, the construction company which had been targeting her for years. Emma Tyrou, a Research Associate for the Council on Hemispheric Affairs (COHA) has referred to the investigation as “a sham”, citing murder scene tampering, clear indications of bias and a reluctance to carry out a thorough investigation.[xviii]  Company records also reveal that DESA’s board of directors includes leaders in Honduran politics, military, and business. What’s more, the president of DESA is a former military intelligence officer and, per Berta’s own statements, offered her a bribe to stop campaigning against the company.[xix] So far, out of the seven men charged with her murder, four of them have ties to the Honduran military. Among those charged are Major Mariano Diaz who had been appointed chief of military intelligence two years prior, and had received U.S. military training.[xx] Ties to the military, however, do not stop there, as a former member of a U.S.-trained Honduran army unit claimed that Berta’s name, along with that of dozens of social and environmental activists, appeared on army hit lists.[xxi]

The Honduran military has also been accused of waging an all-out war against peasant communities who live in Bajo Aguán, a rich agricultural region. Many of these campesinos have been murdered or forced to flee their land to make room for large corporate palm oil plantations. A 2013 report by Rights Action documented 34 acts of violence and intimidation committed by the fifteenth battalion of the Honduran military, which has been deeply involved in the land dispute as a part of two different operations, Xatruch II and III.[xxii] Honduran officials have described the military presence in Bajo Aguán as a mechanism to restore order, yet the violence committed by soldiers as a part of these operations indicates that there are strong ties between the military and the businessmen who are deeply involved with commercial activities in the area and depend on the region for their wealth.[xxiii]

Recent Changes to the Criminal Code
Such abuses could soon be allowed by law as recent reforms to the criminal code – redefining the word “terrorist” – will likely subject more innocent civilians to unjust retaliation. President Hernandez submitted these reforms in January and they have since been approved by the 128-member National Congress. Various human rights organizations view these changes as infringing upon citizens’ right to free speech and the United Nations Office of the High Commissioner of Human Rights (OHCHR) has expressed serious concerns about them.  Foremost among them is the concern with the new definition of “terrorist” as anyone who “seeks to assume the powers that belong to the State such as taking territorial control… causing fear, putting in grave risk, or systematically and indiscriminately affecting the fundamental rights of the population.”[xxiv]  In fact, since the 2009 coup, all Honduran administrations have argued that protesters violate the rights of the Honduran citizens because they block the streets.[xxv] After eight years of this stunted perspective, the new law now officially criminalizes protests and demonstrations as acts of terrorism.

The OHCHR and other international human rights organizations are also concerned that the new reform will grant immunity to members of Honduran law enforcement and the military. Most tellingly, Article 25 of the criminal code now states that law enforcement officials are immune from prosecution anytime they fire their weapons in the line of duty.[xxvi] This stipulation will likely lead to further military abuse especially when faced with a growing protest movement.

An Uncertain Future
Since the 2009 coup and the resultant right-wing political trend, such attempts to expand Honduras’ military might – whether legal or informal – are patently detrimental to democracy and in violation of a number of human rights. The government is clearly placing more control in the hands of corrupt politicians and elites, who in turn use the power of the military to quash dissent, eliminate opponents, and protect business interests. The conflict in Bajo Aguán and the murder of Berta Cáceres are prime examples of the increasing levels of injustice in Honduras. The fact that the Honduran military has been implicated in these injustices points to its ties with the most powerful families and business elites in Honduras.

Activists and peasants are not the only ones facing danger; the Office for the National Human Rights Commissioner of Honduras reported that 43 journalists have been murdered between 2010 and 2014.[xxvii] It is therefore apparent that anyone critical of the right-wing Honduran government and its vested business interests is in danger. With Hernandez having just won his unconstitutional bid for candidacy on March 13 (the ostensible reason for deposing Zelaya),[xxviii] Honduras is moving ever-more towards dictatorship. While this level of hypocrisy and impunity should not be tolerated, it seems less likely than ever that the U.S. will take a firm stand against the regime under the new “America First” policy of the Trump Administration. It is incumbent therefore on human rights groups and other international bodies to continue to denounce and pressure the Honduran government in hopes of halting its militaristic policies.

[ii] Dana Frank “Just Like Old Times in Central America: Why the U.S. needs to stop funneling money to Honduras and start treating its president like the corrupt ruler he is” Foreign Policy March 9, 2015, http://foreignpolicy.com/2015/03/09/just-like-old-times-in-central-america-honduras-juan-orlando-hernandez/

[xvii] Alexander Main “A year after Caceres assassination, US policy on Honduras has yet to change” The Hill March 2, 2017, http://thehill.com/blogs/pundits-blog/international/321970-a-year-after-caceres-assassination-us-honduras-policy-has

[xx] Alexander Main “A year after Caceres assassination, US policy on Honduras has yet to change” The Hill March 2, 2017, http://thehill.com/blogs/pundits-blog/international/321970-a-year-after-caceres-assassination-us-honduras-policy-has