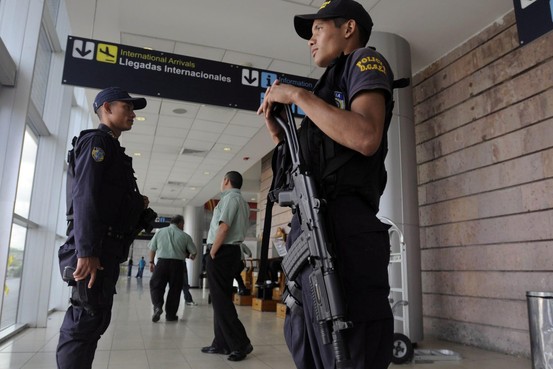 A Honduran policeman shot dead five fellow officers, which police commanders said would only spur on a controversial reform process meant to purge the force of corrupt elements. On Monday afternoon, a police officer in the city of La Ceiba on Honduras’ Caribbean coast killed five of his colleagues in the offices of the DNIC, the police’s criminal investigations unit. The group had reportedly had an argument, before an officer identified as Elias Enrique Mejia Suazo drew his gun and began shooting at close range. He was arrested immediately afterwards.

Police are investigating the theory that the officers were arguing over how to distribute between them a cache of dollars seized as evidence, according to El Heraldo. La Tribuna, however, reports that witnesses said the killing was triggered by “harsh jokes” made between the agents. Police chief Juan Carlos Bonilla said the shooting pointed to the need to continue with reforms to the police, and that the institution would not hide anything, saying “We need to establish greater controls within the institution to avoid these unfortunate events.”

Security Minister Pompey Bonilla said that the killing demonstrated the need for confidence tests to be performed on police officers. The police in La Ceiba have been the focus of various corruption scandals — four officers accused of extortion were arrested there earlier this month, while the anti-kidnapping unit was dismissed and the local commanders replaced in August over officers’ alleged kidnapping and murder of four young men.

A report from IPS highlights opposition amongst officers to tests that are being carried out to assess them for competence and identify corruption and links to organized crime under the authority of newly-appointed police chief Bonilla. Some agents object to the tests, and refuse to recognize the authority of Bonilla, as he was promoted above them despite having lower rank. The rebels, headed by former prisons head Aldo Oliva, say the tests violate their human rights. Eduardo Villanueva, head of the office for police evaluation, told IPS that “the reactions against the process merely indicate that we are on the right track.”

Meanwhile, the Associated Press reports from Tegucigalpa on the case of a teenage boy shot dead by soldiers after passing a checkpoint at night. Fifteen-year-old Ebed Yanes had “never left their gated community alone, had never taken public transportation and didn’t know his way about the city.” The army carried out a cover-up after the killing, but three soldiers have now been arrested. They were part of a special forces unit vetted by the US as being free of corruption.