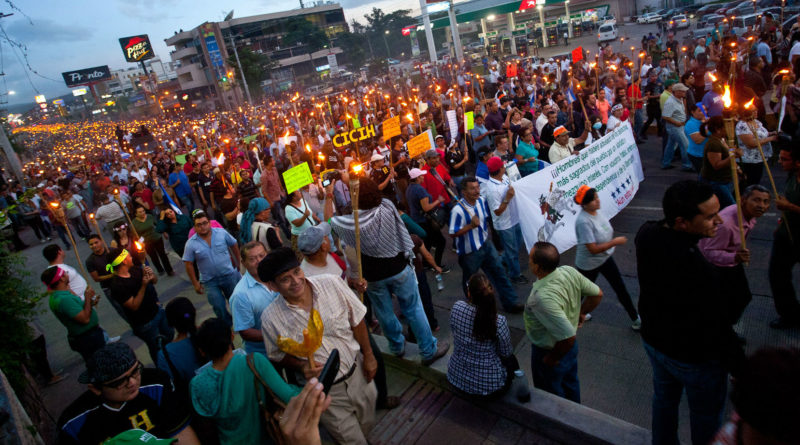 Since the coup against the democratically elected President of Honduras in 2009, Honduras has been experiencing a period of continuous crises. Despite deteriorating conditions, there had been only a limited organized outcry against the corruption, impunity, and lack of employment facing the country until two months ago, when weekly protests began crowding the streets of the nation’s capital, Tegucigalpa. The last straw for Honduran citizens came in May, when it was revealed that private businesses had embezzled $330 million USD from the country’s social security institute, the Instituto Hondureno de Seguirdad Social (IHSS). Ninety four million USD of the embezzled funds had been funneled directly into the campaign of Juan Orlando Hernandez, who, though he admits to receiving the funds, claims to have been unaware of their source.[1] In addition to the injustice of stealing money from the citizens, lack of funding to the hospitals brought about grave consequences. As a result, since the start of the embezzlement, 3,000 patients died due to a lack of appropriate medical assistance, which would have been available if the $330 million USD, previously designed for this purpose, had not been stolen and used to finance the individual interests of a few people.[2] Despite Hernandez’s claim that the money will be paid back to IHSS, the damage is irreversible as money cannot reimburse the lives taken from scandal victims and the pain caused to Honduran families.[3]

After the exposure of the scandal, demonstrations began in Tegucigalpa after a group of young Hondurans protested against Hernandez. The protestors, outraged by the scandal, adopted the name of los indignados (the outraged) and created the March of the Torches, gathering hundreds of people to march in the streets of the capital, illuminating the night with lit torches.[4] Every week, more and more people, the latest numbers totaling more than 60,000, join the protest ranks outside La Casa Presidencial, Hernandez’s residence, to voice their opposition to the injustice committed to the 3,000 victims.[5] The protestors are citizens of all ages, classes, and political parties including human rights defenders, as well as indigenous groups and political figures such as Amable Hernandez, the mayor of Colinas, in the department of Santa Barbara.[6] Although the majority of protestors gather once a week, a group of hunger strikers have stationed themselves permanently at the steps of the president’s house.[7] All of the protests have been peaceful, despite the incessant efforts of the police and military forces to violently silence the protestors’ cries.

Honduras is not alone in standing up against their government’s ceaseless corruption. Right across the nation’s northern border, Guatemala is also fighting against similar cases of corruption and fraud that have plagued their government in recent years. The former Guatemalan president, Pérez Molina, and his government are being questioned after a UN mission against impunity revealed in April that they were associated with a network of bribes at customs, earning millions in profits behind the scenes. As a result, Guatemalan citizens’ have taken to the streets in protest, refusing to stop until Molina is removed from office.[8] Similar intentions exist for Honduras. The indignados protestors in Tegucigalpa are demanding the resignation of President Hernandez.[9] Although there is no formal indication that these leaders will resign, it is certain that both the Honduran and Guatemalan governments will need to increase their transparency and accountability if they intend to remain in power.

Realizing that the resignation of President Hernandez is unlikely, the Honduran protestors are also demanding the creation of an independent judiciary to protect against the widespread corruption and to increase transparency within their government. The Honduran people understand that corruption is heavily entwined in Hernandez’s administration and thus are calling for international assistance, just as Guatemala did previously in 2007 when they pressured the government to establish the U.N. anti-impunity body CICIG.[10] Honduras is proposing a similar accountability legislation called the Comisión Internacional Contra la Impunidad en Hunduras (CICIH). CICIH would investigate cases of fraud within the government and ultimately would help to decrease the nation’s high levels of impunity and corruption.[11] In order for the United Nations to institute the CICIH, President Hernandez would have to make an official request.[12] Protestors refuse to stand down until Hernandez agrees with the creation of the anti-impunity body. In addition to the indignado protestors, Manuel Zelaya and his Libre Party, the traditional bipartisan opposition Liberal Party, and the newly formed Anti-Corruption Party are all in agreement that CICIH is a necessity for Honduras.[13] However, the current government feels that international assistance is not needed and claim that alternative options that will keep the situation confined within domestic boundaries and will be more effective. Yet, previous government attempts to tackle corruption during the term of former president Porfirio Lobo Sosa, the predecessor of Hernandez, have fallen short.[14] Given the controversy of this issue, Zelaya proposed to hold a referendum in order for the country as a whole to decide if CICIH should be implemented.[15]

In the midst of the chaos, the continuous protest against corruption and impunity have proven to be a positive and historic display of constituent power by the Honduran people. Even if the protests don’t reach their exact goals, the fact that Hondurans have taken a strong stand on this issue indicates progress in the fight for government accountability. Nevertheless, the crucial point of this debate suggests that if societal protest continues, Honduras is irreversibly destined to see a change in its political system.