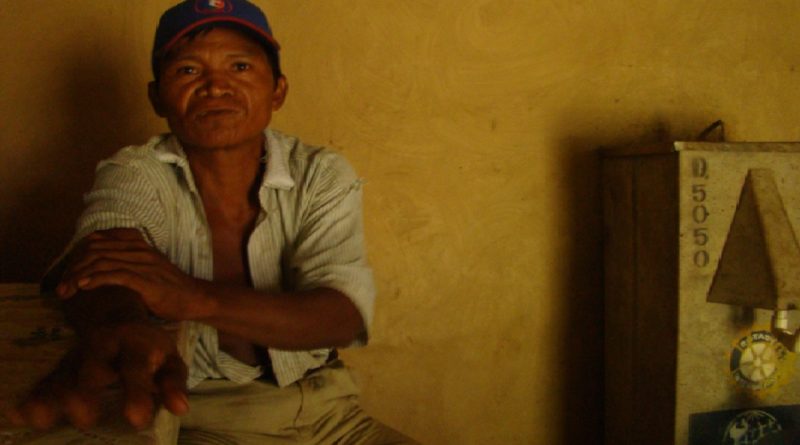 Since 2013, two hydroelectric dam projects have been installed illegally on indigenous land, after the Honduran authorities neglected to inform local communities about the harmful impact that these projects were bringing with them. In 2013, the mayor of the Santa Elena municipality, Alexis Ventura, allowed the company Encinos to explore the area. In turn, this led indigenous groups to organize protest efforts to block the project[i]. The dam project would represent a clear threat to rural communities and it would also affect the local water supply. Additionally, it is clear that there is an undeniable conflict of interest that involves a well-known government official and her husband. All of those opposed to the projects have not chosen to remain silent. Instead, a number of them have organized peaceful protests in order to demand respect for their lands and natural resources, which ended up facing retaliation in the form of mounting violence. Protesters of all ages have been incarcerated, threatened, tortured and killed. In 2016, environmental activist Bertha Caceres was assassinated while protesting a similar project, the Agua Zarca dam. The bodies of other indigenous activists who had taken a stand against the hydroelectric projects have been found mutilated. They all belonged to the Independent Indigenous Movement of Lenca de la Paz (MILPAH).

According to a 2 year investigation by a U.S. NGO, Global Witness, the projects raise serious concerns of illegal conflict of interest in the region[ii]. Arnold Castro, the owner of the Encino hydroelectric company, who also owns its sister company, Aurora, intends to sell energy to the state produced from these dam projects. He is the husband of one of Honduras’s most powerful members of its elite: Gladis Aurora Lopez. Lopez is the Vice-President of the Honduran National Congress and president of Partido Nacional, Honduras’ ruling party. Under Honduran law, the government is forbidden to extend contracts or grant concessions to members of Congress and their spouses.[iii] Global Witness links the murders and the abuse of environmental activists and indigenous communities to Lopez and Castro, who have not been held accountable for their crimes. According to Billy Kyte, a Global Witness campaign leader, those tasked with committing the crimes are rarely arrested, while those who contract them normally go unpunished.

“We have documented countless chilling attacks and threats, including the savage beating by soldiers of pregnant women, children held at gunpoint by police, arson attacks on villagers’ homes, whilst hired assassins still wander free among their victims’ communities.”[iv]

Washington has also been indirectly involved in the oppression of certain indigenous groups through the large amounts of monetary aid given to the country despite Honduras’ long history of horrendous human rights abuses. In 2016 alone, the United States allocated $100 million in bilateral aid, money that could have been used for social and economic development. Instead, tens of millions of aid dollars were given to its military and police, often to the same groups that have been regularly inflicting the violence and assassinating environmental activists. Barack Obama’s 2017 budget request asked to increase aid for the Honduran police and military. In addition, the Inter-American Development Bank loaned out $60 million to the Honduran police after it was approved by U.S officials.[v] According to Washington, Honduras can do no wrong, despite possessing one of the worst human rights records in the Americas.

Efforts to fund police and military in Honduras would be ideal if they operated in accordance with the rule-of-law. Instead, the Honduran police is widely known for being extremely corrupt as well as ineffective, and has raised serious concerns for its tendency to engage in unspeakable criminal activities and human rights infractions. For example, a questionable case emerged in 2009, when 100 agricultors were murdered in the Bajo Aguan region, while the Honduran government turned a blind eye to the perpetrators of these killings. Another victim at the hands of law enforcement agents was activist Tomas Garcia, who was murdered in July 2013. In December 2015, two indigenous men were assassinated as they were working to pull a vehicle out of a sandbank.[vi]

President Juan Orlando Hernandez has been silent regarding the attacks taking place in rural communities. Instead of investigating these repeated major infractions committed by the police, he authorized the military to perform police functions, which is a violation of the Honduran constitution. This decision has resulted in numerous civilian deaths. Militarised police forces have been accused of killing unarmed civilians while passing through perilous checkpoints, arresting and beating activists such as Guadalupe Ruedas, a fervent advocate for children.[vii]

Who has been affected?

Indigenous communities residing in remote areas of Honduras have suffered the most from the dam projects, including members of the Lenca and Tolupan peoples. Not only have entire communities experienced illegal evictions from their homes, many of which were destroyed, but military officials also burnt down their crops and threatened children at gunpoint. Dissident Ana Miriam Romero claimed the first time that she learned about the project was after she saw heavy construction equipment invade her community and commence operations. Quickly surrounded, communities began organizing peaceful protests in hope that the dam project would inform and consult with those who were about to be adversely affected by it. Instead, the riposte came in form of threats and acts of intimidation. Soon after, protesters received death threats and unsolicited visits by police officers who proceeded to use excessive force in order to evict them from their homes. Communities suggested to Global Witness that many of these evictions were connected to Gladis Lopez.[viii]

The so-called “consultation”, occurred a month after the attacks began, operating behind the scene after they were found to be fraudulent. Witnesses informed Global Witness that Gladis Lopez had gathered a group of 600 indigenous people and promised them that some would be needed to work on the dam. She had them sign agreements to  falsely establish that they would be the most affected communities of the Encinos project. However, the list of signatories was almost immediately removed from the official website, and Mayor Ventura’s office then refused to release the documents to the public as requested by MILPAH. Three years later, MILPAH was informed that, in fact, the file had been lost, making the false signatories even more suspicious.

In October 2015, it was reported at the time that a group of 30 soldiers, police and civilians broke into Romero’s home, who was then beaten brutally along with her sister. She was pregnant at the time of the incident, and her children were threatened with guns aimed at their heads. Miriam became a target after she publicly opposed the Encinos hydroelectric project, after this she continued to receive death threats for reporting the initial attack.[ix]

Communities affected by the Aurora dam experienced similar dire consequences. Locals claimed they were never given much of a chance to express their concerns on the impacts of the project, and how it was  going to negatively affect their lives, as well as their local water supply. The Aurora dam has left eight indigenous communities without water, and it was also established during the investigation that a municipal councillor had been offered a bribe in exchange for halting the opposition to it. In addition, a senior government official has been charged with illegally providing an environmental licence for the construction of the dam.[x]

Gladis Lopez replied in a letter to Global Witness, denying any connections to the violent attacks launched against the indigenous communities opposed to the project. She also accused Honduran dissidents for allegedly putting the country’s economy at risk with their alleged false claims:

“It cannot be possible that Hondurans are capable, some of them pushed by their ideologies or for their own agenda to win the November elections in an illegitimate way, to put the country’s economic investment at risk” [xi].

The Honduran government must put an end to the atrocities committed against indigenous groups as well as the environment. Since the 2009 coup d’etat, the de facto regime has waged a war against environmental activists, and has been responsible for the assassination of 120 of them.[xii]

Indigenous communities must no longer remain in the shadows, and their participation and consideration in projects need to be taken into account. The threats, arrests, illegal evictions and assassinations should not be an issue that the indigenous people need to be concerned about on a daily basis; instead, they must be allowed to exercise their freedom of speech through peaceful protests without any violence in return. These communities must no longer live fearing that they will be stripped of their territories, while corporations tip off elected officials in order to authorize the sizing of indigenous  land. As of today, there are more than 20 hydroelectric projects that are being built on indigenous land, affecting groups such as the Lenca, Pech, Tawahka, Miskito, Tolupan and Garifuna. [xiii] On its end, The United States must ensure that not a single dollar of bilateral aid is used to facilitate the repression and violence of rural communities, otherwise their silence will be misread as indifference to their ill treatment.