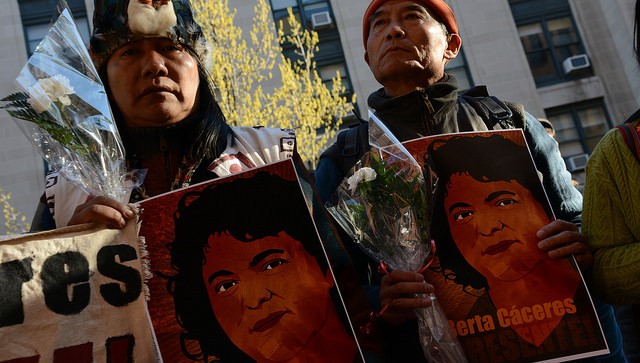 By Emma Tyrou, Research Associate at the Council on Hemispheric Affairs

On March 3, 2016, in La Esperanza, Honduras, a woman dedicated to environmental issues and respect to human rights was shot dead in her sleep, for the sole reason of manifesting an opposition to a several-million-dollar hydroelectric project.[1]  Berta Cáceres’ death represents one of the most prominent human rights violations in Central America, however, her case is not alone. The Honduran government has been particularly oppressive in this sphere since the 2009 coup when Manuel Zelaya’s administration was overthrown. Since then, the country has been tainted with violence due to a collapsed judicial system and the intermingling of both national and international business interests.[2] Not only do levels of violence and impunity in Honduras tragically rank among the most heinous to be found in Latin America, but they are amongst the highest in the world. The country is also one of the most dangerous settings for environmental defenders, like Berta Cáceres’ to live.[3]  A Council on Hemispheric Affairs (COHA) article following Berta’s murder stated that “for Hondurans, Berta’s killing is not simply one more act of violence but rather represents the government’s inability to serve and protect its own citizens. It reflects the intensity of the day-to-day structural challenges that leaders in the democratic force face from the rampant violence, corruption and impunity found in Honduras today.” Berta Cáceres’ murder is thus only the tip of the iceberg—a tragedy that must however serve as trigger to an international awaking. Currently, Berta Zúñiga Cáceres, the daughter of Berta Cáceres, is leading a delegation through Europe that aims to bring attention to the grave situation in her country by calling for awareness and retribution.[4]

COHA stands in solidarity with the Honduran delegation, and strongly condemns the hypocrisy of many international actors who have been turning a blind eye on Honduras’ distressing situation for years.[5] These representatives have all but ignored the gravity of charges in Honduras and have treated the country as a reputable member in the international community instead of a killing field for those opposed to the brutalities that normally take place there on a regular basis. COHA has exposed U.S. policy makers’ standards on human rights violations and Washington’s democratic lapses in Honduras, and will now stand to ensure that the European Union also upholds their commitment to human rights.

Worryingly, the construction of the Agua Zarca hydropower project, that Berta strongly opposed, still threatens the water resources and livelihoods of the indigenous Lenca people. Despite the lethal risks, the Lenca population is still passively opposing the hydropower project, which has been crafted without their prior consultation. A peaceful march organized by the Civic Council of Popular and Indigenous Organizations (COPINH, co-founded and formerly led by Berta Cáceres) was violently repressed again on March 16, 2016, by individuals allegedly related to the dam-builders, the Honduran private company Desarrollos Energéticos S.A. (DESA). The violent strike against the protesters occurred with a high degree of indifference by the Honduran police.[6] On that same day, COPINH Director Nelson Garcia was killed at gunpoint as he was walking home. Although his killing, just like that of Cáceres’, remains unsolved, it is highly unlikely that both murders were not caused or related to someone at the Agua Zarca project. [7]  Thus it is understandable that the Lenca people call for an independent investigation into Berta Cáceres’ and Nelson Garcia’s death—one which would not rule out the probable high degree of involvement of state and non-state actors linked to the Agua Zarca project. In such a process, it is crucial that the Honduran government be held accountable. The former has indeed failed, in the very least, in protecting Cáceres’ and Garcia’s life. This task, in addition to being a fundamental state responsibility, had been entrusted to the Honduran authorities by the Inter-American Commission of Human Rights, after Berta Cáceres had been the subject of repeated intimidation campaigns, including death threats.[8]

A Delegation Calling for Justice in Europe

To bring international attention to such problematic indifference or even criminalization within Honduras, a delegation of four Indigenous Lenca activists are visiting several European countries (Belgium, the Netherlands, Finland, Germany, and Spain) from April 19 to May 5, 2016.[9] The mission of this group to Europe is particularly meaningful considering the number of stakeholders from the old continent who may be, directly or indirectly, materially or intellectually, responsible for Berta’s assassination.[10] An international mission of 15 parliamentarians, jurists, and representatives of human rights organizations as well as  trade unions travelled to Honduras from March 17 to 21. Their reports evidenced that both private and public European actors are, to this date, still funding the Agua Zarka project and aiding the Honduran government.[11] The international mission’s report (released on March 30) undoubtedly contributed to a certain acknowledgement of the gravity of the situation. By April 1, the Central American Bank for Economic Integration, the Dutch Financial Development Company (FMO) and Finnfund (a Finnish Development Finance Company), had announced the provisory suspension of all disbursements toward the project.[12] However, the definitive withdrawal of all international companies and financiers—be they involved through direct funding of the project, or by detaining contracts key to its implementation—remains a vital objective of Honduran activists. COHA affirms its resolute support to this delegation and calls for the abandonment not only of the Agua Zarca project, but also of any further prospection that could result in land grabbing and jeopardize human lives. Any attempt at forcefully carrying on with such projects is tantamount to shamefully tampering with human rights.

“Stop aid to Honduras”: Responsibility of the EU

As reported in a Guardian article titled “Stop aid to Honduras, says murdered campaigner’s daughter,” the European Union (EU) is another prominent international figure worth calling upon considering the large amount of aid being approved to Honduras.[13] In fact, the EU is the main donor of official development aid to Honduras.[14] The EU provided €223 million EUR ($256.9 million USD) to Honduras under the EU Development Cooperation Instrument in the period of 2007-2013. The ongoing EU-Honduras Association Agreement (2014-2020) amounts to €120 million EUR ($135.6 million USD); some 17 percent of which is dedicated to the rule of law and democratic participation sector. The former, as explicitly stated in the Agreement, comprehends commitments from the Honduran government, among which, “to further develop its policies to support the rule of law, maintaining an ongoing dialogue with civil society organisations.”[15] In addition, the EU funds institutions such as the Ministry of Security and Justice and the National Police through the EuroJustice program.[16] Given the worrying situation for civil society in Honduras, urgent measures in order to demand accountability from the Honduran authorities are needed.

The EU Commitment to Human Rights: Turning Words into Action

Admittedly, the EU expressed its concern regarding the situation—through its External Action Service (EEAS) and delegation in Honduras—and demanded that the culprits involved in the murders of Berta Cáceres and Nelson Garcia be brought to justice. The EU stated, “the family of Berta Cáceres, the Honduran people and human rights defenders around the world deserve to see that impunity will not prevail.”[17] Mere declarations are not enough, however well-intentioned they may be.  The situation in Honduras requires immediate and tailored actions. Shortly after the coup in 2009, the European Commission (EC) had suspended its funding due to the non-compliance of namely “macroeconomic and public finance management conditions.”[18] Are blatant fundamental rights violations not sufficient as a reason to suspend funding and implement actual human rights clauses? In light of the recent developments in Honduras, the launching of the EEAS’ campaign “#EU4HumanRights” on March 15 sounds at best like bitter irony.[19]

In spite of the bleak background, the current mission to Europe provides opportunity for change that must be seized.  On April 20, Berta Zúñiga Cáceres took part in a hearing at the European Parliament in Brussels on the topic of “human rights defenders and land-grabbing issues in the context of investment in third countries.”[20] A draft report on the same topic was submitted by rapporteur Ignazio Corrao on March 16, suggesting that “when human rights violations are perpetrated by corporations, this action often involves personal criminal liability and calls for those responsible for such crimes to be prosecuted at whatever level.”[21] The EU now holds all the cards to contribute ending the rule of vested interests over the most fundamental rights.

Conclusion: Shameful Silence at an International Level Must End

In a letter signed by 730 Latin American experts (including COHA’s director, Larry Birns), the U.S. State Department was urged to demand human rights accountability in Honduras.[22] Signed on March 16, the letter called on the United States to immediately suspend all types of financial and technical support to the Honduran government, including security funds given to the army and the police. To this date, the key requirements that should condition international support or involvement of any sort in Honduras have not been met. The steps taken should include first and foremost:

(1) allowing the entry of an independent international team of investigators to solve the crimes against Berta Cáceres and other activists;

(2) ending persecution of human rights workers, namely by allocating funds and administrative support to the creation of an agency responsible for their protection.[24]

It would now only be fair to extend this call to European actors. First, the EU is betraying its core values as long as it does not suspend its security aid to Honduras, and reviews the human rights clauses in its general aid. Then, the implication of European companies in a project that has already cost too many lives must not only stop, but also let the ongoing reflexion on corporate liability for serious human rights abuses in third-party countries become ground for a stricter legal framework in the EU.[25] Last, but not least, the current visit of representatives of the Honduran people to Europe is an opportunity for European—and global—civil society to eventually reflect on what common future they want to shape with the Latin American people.[26]

By Emma Tyrou, Research Associate at the Council on Hemispheric Affairs

[3] A study by the Alliance for Peace and Justice, a Honduran NGO, found that in 2014 fewer than 4 percent of murder cases resulted in conviction. See “Country Report: Honduras 2015/2016.” Amnesty International. Accessed April 21, 2016. https://www.amnesty.org/en/countries/americas/honduras/report-honduras/.

[26] Reference made here to the EU-CELAC strategic Partnership Shaping our common future: working together for prosperous, cohesive and sustainable societies for all citizens, June 2015. Accessed April 25, 2016