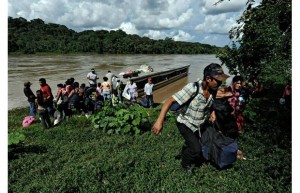 In the final decades of the twentieth century, Latin America – once a prominent destination for migrants – slowly transitioned to become the largest migrant source, mainly as a result of the economic crises that took place in the 1980s. As the number of European and Asian immigrants to countries like Argentina and Brazil dramatically decreased, Latin American emigrants accounted for an astonishing nine percent of all emigrants worldwide.

Today, migration patterns in Latin America are changing once again.  More potential emigrants now stay within the region as new education and work-related opportunities expand their reach to a larger segment of the population. Yet, there still exist vast economic and social disparities between neighboring countries throughout the region.  As a result of these disparities, as well as difficulties associated with emigrating to the U.S., those who leave their homes in search of better opportunities often do not travel as far: Guatemalans emigrate to Mexico, Nicaraguans to Costa Rica, Colombians to Ecuador and Venezuela, and Bolivians and Paraguayans to Argentina, Brazil, and Chile.

While many Latin Americans previously migrated in response to political violence, today migration is mostly motivated by economic reasons. Mexico and Costa Rica are just a few migrant-receiving countries whose per capita GDP is significantly higher than that of their neighbors. For example, Mexico’s GDP of USD 13,900 is almost three times that of Guatemala’s USD 5,200; Costa Rica’s GDP of USD 11,300 is almost four times that of Nicaragua’s USD 3,000. Migrants from Nicaragua quickly fill domestic service and construction jobs in neighboring Costa Rica.  These migrant workers usually take the least desirable jobs, and as a result, inflows of Nicaraguan workers do not affect either average earnings or unemployment rates.

Latin American countries understand the influence that the free flow of people and goods can have on the economic development of the region. Argentina, which receives a great number of immigrants, signed a bilateral agreement in the early 2000s with Bolivia and Peru to facilitate circular migration. As a result of the agreement, some two million Bolivians now live and work in Argentina. Regional governments encourage migrants to invest in their home economies by establishing programs like the Program for Mexican Communities Living Abroad, which support remittances in order to stimulate development projects. Also in Mexico, land ownership rights were changed to allow migrants to acquire land immediately, bypassing long waiting lists and often rigorous requirements. Recently, many local and migrant farmers in the Mexican state of Jalisco,  who otherwise would have travelled north to the United States for work, were encouraged  to stay by the recent burst of economic expansion resulting from a tequila boom . Many Latin American countries recognize the importance of increased human mobility and reflect it in their policies.

However, Panama, the Central American country with the highest GDP, maintains lower levels of labor migration than the rest of the region. In order to protect local workers, Panama’s Ministry of Labor limits employers to hiring a maximum of 10 to 15 percent foreign workers. While the expansion of the Panama Canal created over 7,000 new jobs, few foreign workers were able to find employment in the project, and those who did, had to obtain work visas to come to Panama as trained professionals.

Despite increasing domestic development and incentives issued by some Latin American countries, many migrants choose to immigrate permanently, often to countries outside of Latin America. A 2008 Gallup Poll reports that 13 percent of Venezuelans, 18 percent of Brazilians, and 21 percent of Mexicans and Panamanians said they would leave their country forever if possible; many of those surveyed stated they would choose to immigrate to the U.S. In the case of Haiti, where the desperately poor population continues to depend on citizens who travel to the migrant communities of the Dominican Republic, permanent migration remains a sad reality. According to Evans Jadotte, an Economics Professor at the Autonomous University of Barcelona, in 2005, Haiti received USD 1 billion in remittances, accounting for about 35 percent of the country’s total GDP. Unable to maintain any lasting shred of stable economic development, the country loses almost 83 percent of its college graduates each year.

The old adage that the “grass is greener on the other side” continues to inspire many migrants to travel abroad in search of employment and education opportunities. However, in countries like Mexico and Panama, emigration has notably slowed as more youth prefer to enroll in tertiary education rather than face uncertain employment and low wages. Recently, some of those who immigrated previously are finding that there may be more opportunities in their home country than abroad, and bilateral migration agreements and common market spaces have deregulated human flows, allowing migrants to travel back and forth more freely. A greater proportion of the Latinos who chose to migrate, willingly do so among neighboring countries, abandoning the traditional ideal of reaching the colossus to the North.

This is the third part in a series that covers immigration throughout the hemisphere from a variety of different perspectives.