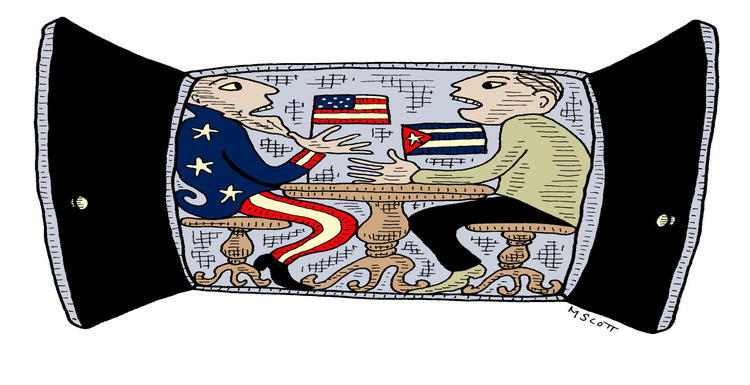 Contrary to what some might say, the Summit of the Americas was a success for President Barack Obama. His steps towards the restoration of official relations with Cuba garnered applause from across Latin America, and praise from President Raúl Castro. Having walked back his deeply unpopular declaration that Venezuela posed a threat to U.S. interests and security, President Obama was able to largely deflect criticism of his sanctions on several Venezuelan officials. As a result, the major headline to come out of the Summit revolved not around leaders’ attacks on his Venezuela policies (which were admittedly abundant), but instead focused on his warm handshake and private discussion with President Castro. Now that the handshakes and happy talk have receded, however, what remains is the delicate task of bargaining with the Cubans–one that will require months, if not years, to complete.

On April 14, Obama sent Congress a notice that in 45 days he would remove Cuba from the United States’ list of State Sponsors of Terrorism, allowing for Cuban use of international exchanges for their monetary transactions (something prohibited under Cuba’s current status). This will satisfy one of Raul Castro’s initial demands, permitting further talks between the two nations to pursue the goal of establishing full diplomatic relations. The U.S. position is that the Cuban government must permit U.S. diplomats unrestricted access to the island and its people, and that there be no restrictions on Cubans who wish to deal with the U.S. embassy. This would allow U.S. officials to meet with Cuban dissidents and provide them with unlimited opportunities to challenge the current government, which Raul Castro will not allow. For their part, Cubans will take aim at Guantanamo Bay and an end to the embargo. House Republicans are certain to object to this as long as Castro’s leftist government controls Cuba. Castro, for his part, will never allow the U.S. to interfere with internal Cuban affairs, and is not likely to permit unrestricted speech and assembly on the island, especially for dissidents who seek to overthrow his government.

These demands leave both sides far from an agreement and demonstrate the difficulty in reaching a deal that satisfies the two countries’ opposing agendas. Obama, for his part, will not be able to make significant changes to relations with Cuba as long as the Republican-controlled House and Senate oppose lifting the economic embargo. However, recent speeches by three Republican candidates for president have indicated an intra-party divide on the issue. Senators Ted Cruz of Texas and Marco Rubio of Florida oppose lifting the embargo, while Sen. Rand Paul, Kentucky, has gone on record stating that lifting the embargo was “probably a good idea.” While Senator Paul is hardly representative of mainstream Republican ideology, business leaders in the U.S. have also stated their agreement with lifting the embargo. U.S. Chamber of Commerce President Thomas Donohue, for example, has stated that his organization favors lifting the embargo because it represents government interference with business. U.S. public opinion, too, appears to be strongly in favor of reversing Washington’s long-standing feud with the Castro government.

Unfortunately, the realities of primary politics will likely render progress on U.S.-Cuba relations a non-starter for most Republican candidates. With the GOP in control of both houses of Congress,, legislation to end the embargo is unlikely to make headway until the 2016 elections come to a close (if it is introduced at all).

That leaves President Obama with a narrow range of options in responding to Cuban demands, and he may have already given as much as he can provide through his executive authority. This is why his meeting with Raul Castro at the Summit of the Americas was so important: it provided both leaders the opportunity to take the measure of the other and to establish the rapport necessary to see their countries through the trying years to come. Both face significant opposition to rapprochement at home and each man wants to be sure that every concession will benefit his country.

Raul Castro is well aware that Cuba is in need of foreign capital, and must address serious degradation in the island’s technological and physical infrastructure. The limited resources of his cash-strapped government make it imperative that it open to global markets, as Cubans, frustrated by their own limited opportunities, leave the island for jobs in Spain, Latin America, and the United States. This flight of human capital must be alleviated, and disgruntled citizens must placated, but no concessions can, in the eyes of the government, threaten the primacy of the Communist Party in Cuba. His negotiations with the U.S. have given him increased stature in Latin America and the possibility of technological assistance by the U.S. He must now gage how far he can go in permitting economic change without inducing political upheaval.

The handshakes, smiles and happy talk of Panama have pleased both leaders. Now, their diplomats must sit down and discuss the myriad issues that have separated the two nations for more than fifty years, while defending any rapprochement to internal opposition. One can expect these talks to be long, and often tense–but ultimately successful.