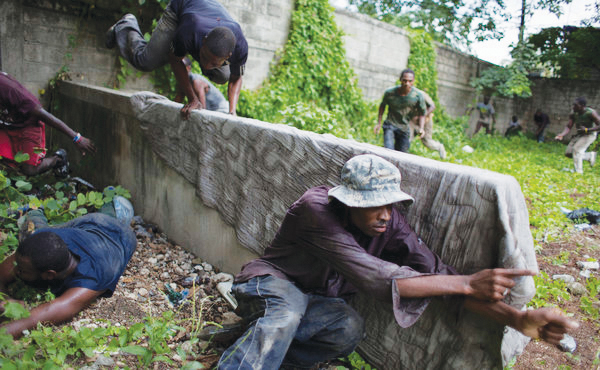 A rogue paramilitary group has established a presence in Haiti by parading around both Haiti’s capital and the countryside dressed in mismatched military uniforms and carrying assorted weapons. This group of veterans and new recruits has begun to threaten the sensitive security situation in Haiti, demanding the reinstatement of the country’s armed forces, which was summarily disbanded in 1995 due to its violent record of abusing civilians during the constitutional government of President Jean-Bertrand Aristide.

Current President Michel Martelly promised during his successful 2010 campaign that he would reinstate the country’s armed forces if he were elected. Since then, Martelly has set up a commission to begin the process of re-establishing the military, justifying the reinstatement under several rationales. He claims that the new military could “fill the security vacuum” when MINUSTAH, the U.N. stabilization mission in the country that currently provides 10,000 police forces to Haiti, eventually leaves the country.(1) In Martelly’s words, “We’re talking about a modern army. We’re talking about an army that can intervene in case of an emergency like the earthquake with the medical corps, an engineering corps—an army that protects our borders, fights narco traffic and maintains peace.” However, considering that 66 percent of Haiti’s operating budget is internationally funded, lack of international support will likely hinder Martelly’s plan.(2)

Martelly met with members of the paramilitary group during his campaign to discuss the future of the military, and they were initially optimistic about Martelly’s proposed military strategy. Original members of the group quietly began to train unofficially upon Martelly’s inauguration.(3) Martelly’s present design will continue to delay the re-establishment of the armed forces for at least a few more years, and the proposed military will widely exclude members of the rogue group. The Haitian government’s estimated 2011-2012 budget of 119.8 billion gourds ($3 billion USD) does not have room for military funding.(4) “Haiti doesn’t have the money, and the international community has no appetite for funding something like this,” said Mark Schneider, vice president of the International Crisis Group.(5) Even if Martelly does secure international approval and funding for the reconstitution of such a historically controversial body, these members will be dissatisfied with their exclusion from the legal military.

Partisans of the paramilitary group have now reached an estimated 3,000 (although a representative for the group claimed that there are at least 15,000 in number). Reportedly 400 of the members are veterans, who are responsible for training new recruits. In February, they began to occupy old military bases, and have since regularly marched through Haiti, armed, in plain sight of MINUSTAH and the Haitian National Police. The group claims to be self-supporting. However, many speculate that there are external benefactors, based on the appearance of new trucks, uniforms, and fuel supply.(6) In mid-April, the group attracted attention when several dozen of its members wearing military uniforms interrupted a session of Haiti’s deputies, demanding the immediate ratification of Laurent Lamothe’s nomination as prime minister, causing the deputies to quickly adjourn their meeting.(7) MINUSTAH and the Haitian National Police arrived at the scene but failed to respond to the incident.

Afterwards, the Haitian National Police issued a statement saying, “Any offender will undergo the rigors of the law,” while the head of the MINUSTAH mission in Haiti, Mariano Fernandez, called the incident “an unacceptable act of intimidation” that was “an attack on the integrity of sovereign democratic institutions.”(8,9) Martelly condemned the incident from a hospital in Miami where he was receiving medical tests for pulmonary embolism. In response, some members of the Haitian parliament criticized Martelly’s efforts to combat paramilitary groups because they felt he has not taken a strong enough stance against them. Senator Kély C. Bastien said, “If the presence of armed men does not bother the executive, it is because it feels comfortable.”(10) President of the Chamber of Deputies Levaillant Louis-Jeune stated, “We want a clear explanation from the government on what happened. We want to know how a band of armed outlaws could be allowed to take to the streets and invade our workspace. … They are operating freely and openly under the eyes of the authorities and they are not doing anything to stop it.”(11) Senator Andrice Riché took an even stronger stance by saying, “No paramilitary force could exist in the [national] territory without the complicity, tolerance, and the blessing of those in power. Democracy is in danger.”(12) Authorities first took action against the military group in early May when MINUSTAH and the Haitian police arrested two members of the paramilitary group for carrying illegal weapons.

A year after Martelly’s inauguration, the disgruntled group is growing impatient and issuing new threats. On May 18th, amidst the country’s celebration of Flag Day, the group marched through Port-au-Prince wearing assorted dark green uniforms, some carrying handguns. The march turned violent when some of the paramilitary began throwing rocks at U.N. peacekeeper units near the National Palace. U.N. forces responded by firing tear gas into the crowd. Fifty-three of the demonstrators, including two Americans who were allegedly aiding protestors, were arrested on charges of carrying illegal weapons, driving motorcycles without proper paperwork, and assaulting a police officer. Those carrying illegal weapons may be charged with “plotting against the internal security of the state.”(13) This was the first time the government or the U.N. mission took such firm action against the group.  Since the May 18th protest, the government has closed three of 10 occupied military bases, including the largest of the bases. Afterwards, new Prime Minister Lamothe said, “The victory is for the police. … We are very happy. [Soon] there will be no more rogue army.”(14)

Although members of the rogue group have declared that peace and security are the goals of their group, these declarations are backed by violent rhetoric. One of the leaders of the group, former army sergeant Larose Aubin, told the Irish Times, “We’re going to come with force and with the population, and we’ll get what we’re looking for. Even if we lose our lives, we will fight. They can’t kill us all.”(15) The determination of the group should encourage Martelly and his government to create an appropriate strategy to peacefully disband the group, as it poses an obvious threat to the nation’s stability.

Despite the military’s history of civilian repression, the new group has been able to gain public support. Although many would expect the population to fear the new group, based on past abuses, Haiti’s history of abusive foreign occupation—including the early 19th century French occupation and U.S. occupation in the early 1900s—may explain why the group has been able to gain support.(16) The current outside military presence in Haiti—the MINUSTAH peacekeepers—although charged with less exploitive goals, are still not viewed favorably by Haitians. Recurring negligence—including accusations that Nepalese U.N. peacekeepers caused the cholera outbreak that began in October 2011 as well as charges of rape against several peacekeepers earlier this spring—have overshadowed U.N. successes. A recent poll of more than 800 households in Port-au-Prince found that the majority of respondents wanted the U.N. troops to leave Haiti.(17) “The U.N. hasn’t looked after Haiti, they’ve only killed more people. We will do a better job of caring for our own,” one young army recruit told the BBC.(18)

Thus, part of the problem lies in Haiti’s history of abusive foreign occupation and the citizens’ desire to take control of their own security. David Dorme, a leader of the ex-army group and a former sergeant, has said that 6,000 ex-soldiers and jobless young men contacted the now-disbanded Lamentin camp seeking to join the new army. Many of them have now returned to their homes, but they stand ready to join. Many Haitians believe that the reinstatement of the army will provide much-needed jobs. In a country where the majority of the population lives on $2 USD a day, however, alternative employment opportunities are essential for economic conditions in Haiti to improve.

The government needs to effectively disband the group before it gains enough power to pose a formidable threat. However, the lack of Haitian support for MINUSTAH complicates Martelly’s ability to find a solution. Martelly cannot easily call on MINUSTAH to address the issue, because the population appears more supportive of the rogue military than the U.N. mission and, for many Haitians, this action would constitute an act of betrayal. First, the government needs to negotiate with the group, and if that proves ineffective, the Haitian National Police should move more actively to disband the group, forcing the group out of all military bases and taking a firm stance on the possession of illegal weapons. Foreign peacekeepers should get involved only as a last resort.

Creating a military would be an unsuccessful tool in furthering the development of the country. Haitians need education, clean water, food, and improved housing conditions, not a military force. But if the government can first improve living conditions and increase employment opportunities for Haitians, this would help eliminate a source of frustration for the group, and protests should subside. An increase in the Haitian police force could dually offer a source of employment and increase Haiti’s control over its own security. Meanwhile, the United Nations needs to refocus the goals of the mission, make appropriate concessions for their mistakes, and get back to winning the hearts and minds of the people.