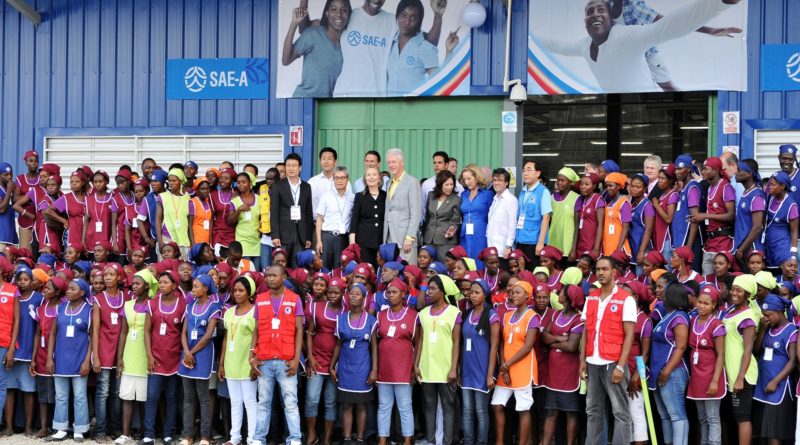 On Monday June 26, 2017, Haitian garment workers marched towards the Ministry of Social Affairs in Port-au-Prince to protest their profoundly low wages.[i] As the workers walked, they held signs with slogans such as “long live the independent fight for factory workers.”[ii] Union leaders began protests in May, calling for increases in the daily minimum wage and social benefits, as textile workers in Haiti receive only 350 Haitian Gourdes a day, the equivalent of $5.20 USD.[iii] At these earnings, an average household spends over half of their income on food, and many families cannot afford to send their children to school.[iv] With rising inflation, increased fuel prices, and stagnant wages, workers are unable to work and live with dignity.

Unions are calling for an increased daily wage of 800 Gourdes ($11.90 USD), but this increase seems unlikely as the government fears increased wages will cause foreign retailers to seek cheaper labor elsewhere.[v] Haiti’s Minister of Social Affairs and Labor, Roosevelt Bellevue, fears that “if the salary becomes too high, companies will leave and go to the Dominican Republic or Nicaragua.”[vi] The textile industry is one of the country’s few formal sources of income and accounts for 90 percent of exports, a majority of which go to retail stores in the United States.[vii] Haiti and the United States share a repressive trade relationship, as Haiti relies heavily on its U.S. exports to maintain its economy; however, the miserable wages industrial workers receive are far from adequate. Many Haitians live without permanent housing, as natural disasters have destroyed numerous homes, and they are unable to rebuild with most of their income going towards food and transportation.[viii] Therefore, unions are calling for the construction of social housing in addition to increased wages.[ix] Due to the country’s limited social benefits and low minimum wage, the only way to ease Haiti’s social unrest is for the government to reform its labor standards, despite the threats from U.S. companies.

The U.S. State Department justifies its investments in Haiti’s economy as efforts towards job creation and poverty reduction.[x] This investment is seen primarily through U.S. companies building factories in Haiti to export products to retail stores, such as Walmart and Target.[xi] These factories provide Haitians with jobs and low-cost production for U.S. firms. Since 1983, the United States and Haiti have had a preferential trade relationship, which was established with the Caribbean Basin Initiative and extended through the Caribbean Basin Trade Partnership Act in 2000.[xii] This partnership established that garments made in Haiti are not taxed when exported to the United States.[xiii] In addition to duty-free exports, the Haitian Hemispheric Opportunity through Partnership Act (HOPE) in 2006, followed by HOPE II in 2008, furthered financial assistance to Haiti in order to meet international labor laws.[xiv] Many U.S. industries have built factories in Haiti’s industrial parks and have supplied some 40,000 jobs, according to the Association of Haitian Industries.[xv]

The Caribbean Basin Trade Partnership Act and HOPE II established preferential trade with many other Caribbean nations, as well as Haiti. The removal of trade barriers increases the abundance of trade, but it also makes it easier for companies to float from one country to another in search of the cheapest labor.[xvi] This practice creates a “race to the bottom” for wages, as well as the dumping of labor that is deemed too expensive.[xvii] In addition to Haiti, the United States has factories in Bangladesh, the Dominican Republic, Mexico, Vietnam, and Pakistan.[xviii] While many Americans find themselves without jobs as the labor is moved to these U.S.-owned factories, there is also a pattern in these foreign factories of harsh working conditions and legal violations, including falsified wage records.[xix] Furthermore, U.S. companies use contractors to establish manufacturing overseas, which limits the transparency of firms’ production lines.[xx]

U.S. industries are unhappy with the recent protests in Haiti. Prior to the protests on June 26, six U.S. corporations sent letters to Prime Minister Jack Guy Lafontant demanding that the government put an end to the protests.[xxi] In the letters, the companies claimed they chose to do business in Haiti due to its “total cost competitiveness, quality production, and proximity to the [United States].”[xxii] The corporations also threatened that if the protests continued, they would “make other strategic arrangements to move from Haiti to other places.”[xxiii] According to MGA Haiti S.A. and Astro Carton d’Haiti S.A., two U.S. corporations with factories in Haiti, they have already lost $50 to 60 thousand USD due to the recent protests.[xxiv]

The United States is the number one importer of Haitian goods and continues to invest in Haiti’s economy through programs such as the Haiti Economic Lift Program (HELP).[xxv] HELP was initiated in 2010 and expanded the number of factories producing in Haiti.[xxvi] Due largely to economic aid from the United States and the flooding of agricultural land from natural disasters, the textile industry now makes up a majority of formal employment in Haiti, and workers have limited options for work.[xxvii] The hegemonic U.S. business influence over Haiti’s employment constricts its ability to reform the country’s labor structure. Haiti needs the production of U.S. goods to supply jobs, but even with the jobs, the low wages given to workers are not adequate — a similar situation to other Central American countries as well. According to the United Nations (U.N.) World Food Program, 2.5 million Haitians live in poverty, and many others struggle to cover the costs of food and transportation as inflation increases.[xxviii] The miserable wages, lack of job opportunities, and few social benefits are causing workers to use their right to protest and demand improved working conditions.

The last time the Haitian government increased the minimum wage was in May 2014.[xxix] This change was a 12.5 percent increase, but was still far below what garment workers hoped.[xxx] In a country where two-thirds of the population lacks formal employment, garment workers accepted the wage increase, as the textile industry was one of the few formal income sources.[xxxi] Prior to the change in minimum wage in 2014, a competitive wage market existed between Haiti’s industrial parks. At Codevi, the main industrial park before the construction of the Caracol Industrial Park (CIP), workers made $0.72 USD per hour, which was below the nation’s minimum wage.[xxxii] When CIP was opened in 2012, wages were pushed even lower, to $0.67 USD per hour.[xxxiii] Textile factories in Haiti have a history of paying below the minimum wage, and paying on a “what you do is what you get” system.[xxxiv] Factory owners have historically ignored labor laws in order to produce the cheapest products, and when questioned about their practices claimed they were abiding by national standards.[xxxv] Furthermore, the industrial factories were able to pay such low wages due to their proximity to homeless camps and Haitian desperation to find work.

When the 2010 earthquake hit Haiti, 1.5 million people were left homeless and were moved to displacement camps.[xxxvi] These camps were “a patchwork of tents and tarps,” and were meant to be temporary until Haitians could afford to build new houses.[xxxvii] However, with such low wages, civilians could only afford to cover the costs of transportation and food, and the shelters have been left largely unchanged. The United States claims the jobs it is creating in the industrial parks are providing Haitians with the “means necessary to rebuild their destroyed homes,” but this has not yet happened.[xxxviii] The industrial parks, funded mainly by the U.S. government and its companies, depend on the cheap and desperate labor in these homeless camps and take advantage of Haiti’s housing problem.

Ever since the 2010 earthquake, Haiti has been dependent on international aid and remittances to quell the country’s economic problems.[xxxix] Despite the outside assistance, little improvements were seen to housing, and when Hurricane Matthew hit in 2016, 55,000 people were still living in the homeless camps.[xl] The hurricane left 175,000 additional people without homes,[xli] and in the city of Jérémie, 80 percent of the buildings were destroyed.[xlii] In addition to the construction of social housing, protesters are demanding subsidies for food and transport, as they struggle to afford these necessities as well with their low incomes.[xliii]

Next steps for Haiti

Between protests for increased wages and threats of businesses removing production from Haiti, the government must decide how to respond. Haiti’s economy is dependent on its relationship with the United States to provide formal employment to Haitians, but it is this repressive partnership that prevents social improvements and keeps wages low. As U.S. businesses invested in Haitian factories, manufacturing jobs moved out of the United States and into the cheaper, foreign factories. U.S. President Donald Trump ran on an economic agenda in 2016 to bring manufacturing jobs back to the United States. This agenda could severely interrupt the current U.S.-Haitian labor relationship, and if he follows through with his promises, will decrease U.S. investment in Haiti’s textile industry. For Haiti to address its current labor issues, it must keep this possible U.S. action in mind. As the government addresses the country’s deep labor issues, it must also move away from reliance on U.S. investment and exports.

Haiti’s labor issue is deeper than its low minimum wage. With the Hurricane Matthew wiping out many food crop industries, Haitians now rely on industrial jobs for formal employment, regardless of the wages offered. If manufacturing jobs move back to the United States, Haiti must have diversity in employment opportunities so Haitians will not end up unemployed. Haiti must focus on revitalizing its agricultural industry, so there is an alternative to textile jobs. Additionally, Haiti must increase its minimum wage to cease the protests, despite U.S. threats. The High Council of Salaries, which specializes in recommending changes to minimum wages, proposed an increase to 400 Gourdes a day.[xliv] With Trump’s promise to move manufacturing jobs back to the United States, Haiti must decrease its reliance on U.S. investments by focusing on its domestic labor structure. The Haitian government must increase its minimum wage and expanding employment opportunities so citizens can make a living regardless of U.S. actions.