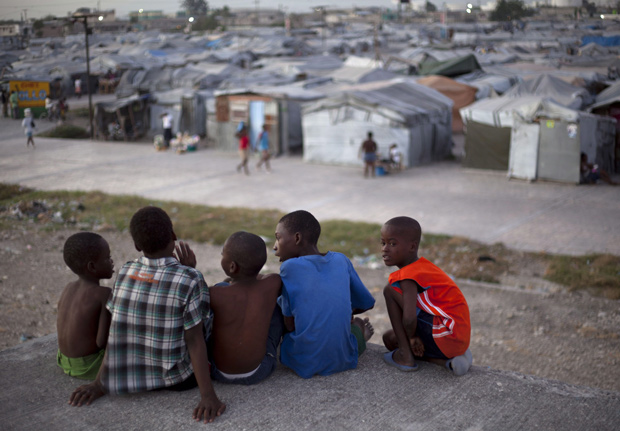 Three years after the 2010 earthquake, Haiti continues its struggle to rebuild. An expanding cholera outbreak and food shortages following Hurricane Sandy in October 2012 have hampered earlier relief efforts.[1]  All the while, Haiti has become one of the most extreme cases of a state relying on foreign aid, receiving billions in foreign assistance throughout the years.[2] Despite the billions of dollars pledged and disbursed to rebuild a greater nation, Haiti has regressed back to pre earthquake conditions, as one of the poorest countries in the Americas.[3]  On the tragic anniversary of the earthquake, relief efforts and development programs must be held accountable for any shortcomings, while more transparency is required from the international community involved in the implementation of aid programs.

On the afternoon of January 12, 2010 a magnitude size 7.0 earthquake had struck outside of the Haitian capital of Port au Prince.  The earthquake was estimated to have killed over 200,000 people, displaced 3million victims and caused over $7 billion in damage.[4]  In response to the 2010 earthquake $13 billion has been pledged and $7.5 billion has been disbursed for relief efforts and development programs to Haiti, a country with a population of around 10 million.[5]  The amount of aid mobilized following the earthquake symbolized a tragic rebirth, meaning that the disaster had created an opportunity to improve living conditions.  However, three years later, 80 percent of the population still subsists below the poverty line with an unemployment rate of 40 percent. The International Food Policy Research Institute has stated that food insecurity in the country is now extremely alarming.[6]  What’s more, 357,785 Haitians are still relegated to living in the 496 tent camps throughout the country.[7]

These statistics raise questions surrounding the sorts of ambiguity about the consistency of allocation and the depth of distribution of financial assistance made by the international donor community. Reports on assistance have been conflicting; however, it appears that a majority of the aid was disbursed to scores of Non Governmental Organizations (NGOs) and private contractors.  In the case of Haiti, a majority of relief and development from the international donor community is disbursed to private organizations and independent contractors, which undermines the capability of the government and underscores the pervasiveness of foreign influence in Haiti. [8]

At first glance, hampered relief efforts are blamed on a lack of infrastructure, the sheer magnitude of the earthquake, and high levels of corruption.  According to Transparency International, Haiti stands as the11th most corrupt country in the world.[9]  However, while Haiti has proven to be a logistical nightmare, due to lack of infrastructure and corruption, a significant portion of the blame should be focused on the international donor community’s practice of bypassing the Haitian government. A majority of the aid from foreign governments, private individuals, and organizations, has been slowly leaked to organizations and contractors outside of Haiti. Only one percent of foreign aid has been given directly to the Haitian government largely because donor countries insisted that the government aid disbursement would be mismanaged due to systemic corruption and mismanagement.[10]

For years foreign powers have intervened in Haiti’s economic and political institutions; an action that has long been a major factor contributing to the institutional instability and dysfunctional management of the country.  Prior to its independence proclamation in 1804, Haiti was a French slave colony.  From 1915 to 1934 the United States occupied the country for corporate interests. During the Cold War Haiti had been seen as a strategic country. Foreign governments would oftern use force or their financial leverage as a method of persuasion to bring about a favored political agenda.[11] Furthermore, U.S. presidents associated aid with Washington’s political and economic agenda, where aid was suspended when Haiti did not abide with U.S. over interests.  As a direct result of this heavy foreign influence, Haiti has experienced countless brutal dictatorships and violent coup d’états.

Where did the money go? (Republic of NGOs)

Following the 2010 earthquake, 75 percent of all aid has been disbursed to nongovernmental organizations (NGOs) and private contractors located in the Washington metropolitan area. The remaining funds have been disbursed amongst international organizations and U.S. government agencies, such as the Department of Defense.  In many instance the government of Haiti has received less than 10 percent while local vendors and NGOs have received less than one percent of aid from such foreign donors.   Whereas a majority of the aid has been funded for temporary relief and pre-existing projects, “half of the donors invested in projects begun before 2010 continued those projects”.[12]

In addition to inadequately planned relief and development efforts, the level of inconsinstency in management of NGOs and private contractors over financial accounts has further hindered reconstruction efforts. The gold rush of aid following the earthquake has transformed Haiti into an attractive business opportunity for the private sector; in such instances, the Haitian government is unaware of how many NGOs operate within the country.  A recent review on relief aid distributed to Haiti by the New York Times reveals that “post-disasters idealism came to be undercut by the enormity of the task” where “operations cost were enormously high compared to the domestic cost”.[13]  Furthermore, the review gave accounts on development projects overseen by NGOs and private contractors that were over funded, financial mismanaged, and poorly executed.

In 2012 the Haitian Reconstruction Relief Watch (HRRW) requested information from the United States Agency of International Development (USAID) regarding aid disbursements to NGOs and private contractors.[14] The report furnished by USAID was the first report on aid transparency since the earthquake. The report revealed that the U.S. private contractors, Chemonics International, received $173.7 million in aid, when it had spent only $1.9 million to construct a building for the Haitian Parliament.  The Haitian government has remarked that building is nothing more than a “shell” which would cost the government more money while diverting precious resources and time away from more fundamental areas.[15]   Another example of questionable development projects are of the unfinished housing projects surrounding Port au Prince, where in Morne à Cabri, 3,000 housing units remain vacant. The housing development has been intended to provide permanent residents for victims of the earthquake. However, funding for the community remains clouded in mystery about its long-term future.[16]

It is hardly surprising that resentment among aid workers and foreign governments in Haiti remains high.  The lack of transparency from the international donor community has allowed the international private sector to operate without sufficient accountability, while ignoring the local government. Moreover, Paul Farmer founder of the U.S. NGO “Partner in Health” with over twenty years of experience has stated, “There’s graffiti all over the walls in Port au Prince right now saying, ‘Down with NGOs,’”…”I think people in the NGO sector need to read the writing on the wall.”[17] This symbolizes the need for the international donor community to reexamine aid efforts by listening to the Haitian people and government.

The international donor community commonly refers to Haiti as a “fragile state” believing Haiti is not entirely able to reach success unless it can overcome decades of political corruption and instability.[18]  Simultaneously a vast majority of the recipients of financial aid seldom publish progress reports while operating with little oversight.  Therefore, it is very hypocritical that the international donor community has been reluctant to fund the Haitian government over concerns of corruption when aid disbursements and lofty contracts are frequently given to NGOs and private contractors that operate with little to no accountability.

Finding solutions to develop and rebuild Haiti is not an easy task. Although there has been significant progress made, the successes are short-lived.  Conventional development methods cannot fit into the immensely difficult circumstances present in Haiti due to the lack of governmental institutions to assist in the rebuilding of the country’s dilapidated infrastructure.  However, if the Haitian government is not involved in relief efforts and development, despite initial success, inevitably those projects will inevitable fail. In order for lasting progress to be made in Haiti a number of reforms are required:

Three years after the earthquake a majority of Haitians still live in poverty, relief aid has dried up and    reconstruction efforts have produced dismal results. Corruption, along with a lack of transparency and the various conflicting foreign agendas has been the main contributors to the failure of rebuilding Haiti. The people of Haiti should have the ability to choose their destiny, free from foreign governments infringing on their sovereignty. Special Representative Nigel Fisher of the United Nations Stabilization Mission in Haiti (MINUSTAH) stated, “Tens of thousands, hundreds of thousands of people are here delivering aid, but they are performing doing functions that should be achieved by the Haitians…You cannot complain about failures of the Haitian state if you don’t support its ability to grow stronger. For decades, we have not invested in that very much”.[19]

JT Larrimore and Brielle Sharkey, Research Associates at The Council on Hemispheric Affairs

[4] Mark Windsor, “For Haiti’s earthquake survivors, life has been a slow recovery, “ The Guardian, January 11, 2012, http://www.guardian.co.uk/world/2012/jan/11/haiti-earthquake-survivors

[7] United Nations Office of the Special Envoy Haiti, Has Aid Changed, Channeling assistance to Haiti before and after the earthquake, June 2011, www.haitispecialenvoy.org

[18] Terry F. Buss, and Adam Gardner, Haiti in the balance: why foreign aid has failed and what we can do about it, 2008, Brookings Institution Press, Washington, D.C., http://www.brookings.edu/research/books/2008/haitiinthebalance

[19]Katie Klarreich and Linda Polman, The NGO Republic of Haiti, Who is Really Leading Reconstruction Efforts in Haiti?, The Nation, November 19, 2012, http://www.thenation.com/article/170929/ngo-republic-haiti#