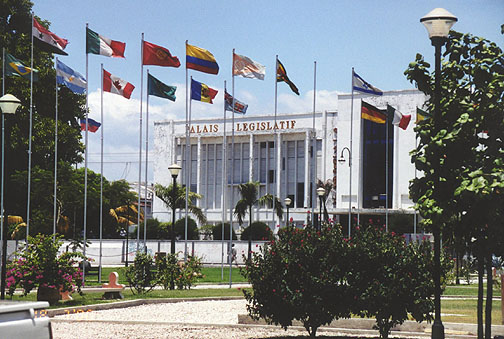 Tous les Haïtiens sont des Haïtiens. Fini le débat. With these two sentences, which state that all Haitians are Haitian and thus equal, Haitian President Michel Martelly announced on June 19 that the amendments to the 1987 Constitution, approved by the National Parliament on May 9, 2011, are now in effect. The legislative process of the Haitian Republic now requires that new acts, after being enacted by the voting Parliament, have to be published in the national journal, Le Moniteur, to become effective after being promulgated by the president.[i] The new text was officially published in the Moniteur, just a few days after the pronouncement, on June 21.

The announcement could not have been made public without the support of the National Assembly, which guaranteed the legitimacy of the 128 newly approved articles. The rewriting of the Constitution involved not only the members of Parliament but also delegates representing the president and various bodies of civil society. Additionally, in order to pass the amendments, a pronouncement of non-objection was needed from the Supreme Court. Martelly said during the press conference at the National Palace, which was attended by Prime Minister Laurent S. Lamothe, other ministers, and several ambassadors to Haiti from other Latin American countries,[ii] “The three powers agreed on reproducing the text of the amended Constitution without the objection pronouncement from the Supreme Court.” Moreover, Martelly stressed that a spirit of self-sacrifice and sense of patriotism are necessary conditions for establishing a modern state in Haiti. Initially, Martelly opposed the idea of the new Constitution and tried to prevent it from coming into effect, claiming that the document contained “material errors.”

The change in the Constitution will introduce several innovations to the political organization of Haiti, including newly created institutions, a gender quota in the public sector, and most importantly, a new definition of Haitian Nationality that allows dual citizenships.

The previous Constitution was written in 1987, just after the end of Jean-Claude Duvalier’s regime, who was preceded by his father, François Duvalier, better known as “Papa Doc.”  The former Constitution was composed in order to end the succession of dictatorial-inherited regimes, and the Haitian population ratified it by means of a referendum. Haiti has promulgated 23 constitutions since gaining its independence from France in 1804, which reflects the country’s political instability. Hopefully, this new constitutional change will establish the requisite political framework to foster economic and social growth. In the course of its mission to Haiti in June, the International Monetary Fund emissaries concluded, “The new government would need to accelerate the pace of reconstruction against the backdrop of political stability and security.”[iii]

The first and most advertised innovation of the new Constitution is the provision that allows Haitians to maintain dual nationalities. This clause allows Haitians who live abroad to vote and actively participate in the political life of the country. Previous constitutions barred dual-nationality holders from attentively participating in political activity. This change in policy was mostly endorsed by the Haitian diaspora, the part of the Haitian population living abroad and mostly concentrated in North America, France, and other French speaking countries.[iv] The problem of dual nationality became more critical after the devastating earthquake of January 2010, as the Haitian economy became even more heavily dependent on remittances sent from abroad, which now constitutes more than 20 percent of Haiti’s GDP.[v]

Martelly’s decision can be understood as a strategy to garner and maintain support from the 3 million Haitians living abroad. In the next legislative and municipal elections that will take place in 2013, those who hold a dual nationality can not only vote but also run for governmental positions. The only limitation is that a citizen who holds a foreign nationality will not be allowed to run for president, prime minister or deputy. Such a constraint is understandable because these offices will make up the core of the Republic. Additionally, the new amendments grant Haitians with dual nationalities the right to own land. In terms of economic development, this limitation was counterproductive because of the formidable economic potential of the Haitian diaspora.

Furthermore, the new Constitution creates a new Constitutional Court and a Supreme Court in charge of supervising the judiciary power and guarantees the courts’ independence. Additionally, the new constitution creates a new permanent Electoral Council, which will replace the previous CEP—Conseil Electoral Provisoire—with the objective of monitoring elections in order to prevent corruption, an ill that has plagued the country. The new administration has already made strides in the struggle against corruption through new initiatives. Recently, three executives from the regional offices of the Ministry of National Education and the National Credit Bank were arrested for embezzlement, forgery, and money laundering, just a few days before the announcement of the new Constitution was made.[vi]

The new Constitution establishes a gender quota, which requires that 30 percent of employees in the public sector be women. Although the country’s laws officially prohibit discrimination against women, several cultural traditions still restrict a woman’s exercise of social and civil rights. However, progress is being made, as demonstrated by the fact that Gabrielle Yacinthe recently became president of the newly established Permanent Electoral Council.

Arguments have arisen concerning the Constitution’s two versions—one in French, one in Creole—which are both official languages and of the same legal value. Former presidential candidate for the center-right Rally of Progressive National Democrats Party Mirlande H. Manigat stressed the fact that the two texts have to be considered with the same juridical value, and as she points out, the 1987 Creole version of the Constitution was not properly amended, creating problems of congruency between the two versions. This kind of confusion could negatively impact the stability of the country and mar Haiti’s international image in the eyes of potential investors and partners. Thankfully, after a special two-day session of the Senate, the representatives came to a provisionary agreement on how to correct the material errors, deciding to reopen debate at the end of the legislature. This measure does not totally resolve the issue of Haiti’s constitutional inconsistency, but it could be seen as a step forward in its political and institutional growth, which is directly linked to the country’s economic development.[vii] In order for the country to grow economically, Haiti must pass through a process of state building and social innovation.