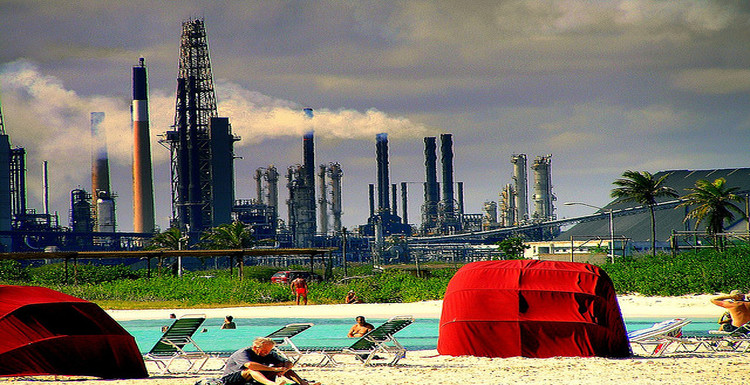 By: Dr. Odeen Ishmael, Senior Research Fellow at the Council on Hemispheric Affairs

Ever since the inception of PetroCaribe in 2005, Guyana has remained firmly committed to the oil agreement. This staunch assertion flies in the face of urgings from some analysts in the Caribbean region who opine that Venezuela would be unable to sustain the program of providing concessionary oil to countries signatory of the PetroCaribe agreement but due to its current economic crisis and the recent drop in international oil prices the status of the agreement remainded in doubt. They, therefore, suggest that now Caribbean countries, including Guyana, should no longer place much reliance on it.

This position was also adopted by the International Monetary Fund (IMF) which in November 2014 claimed that four Caricom countries (Belize, Haiti, Jamaica and Guyana) had begun to take steps to reduce their dependency on PetroCaribe oil.

But it was unclear how the IMF had reached this viewpoint with respect to Guyana. An opposite position was taken by the country’s finance minister, Dr. Ashni Singh, who stated in his March 2014 budget presentation that the country had concluded three rice-for-oil agreements with Venezuela, specifically within the ambit of the PetroCaribe agreement and aimed at debt compensation. He also assured that Guyana would continue to meet its obligations under the PetroCaribe arrangement.

From the beginning of the agreement, Guyana never placed its total dependency on PetroCaribe oil; it actually obtains only half of its fuel energy requirements from that source. Guyana has not responded to the IMF statement, but nevertheless the government is concerned over the economic downturn in Venezuela, one of the largest purchasers of Guyana’s rice. It is probably for this reason that the national rice marketing agency has been seeking to expand its international rice sales to new markets just in case future Venezuelan purchases are reduced.

Significantly, Venezuela’s President Nicolás Maduro has dispelled fears about any cutback in PetroCaribe support to Caribbean countries and has reassured them of the “long term” viability of the agreement despite the recent price drop. He reaffirmed his government’s commitment to the initiative which would remain as an integral part of Venezuela’s strategy for regional security and support.

As of now, Guyana remains firmly in support of PetroCaribe. At a joint meeting of PetroCaribe and the Bolivarian Alliance for the Peoples of Our America (ALBA) in Caracas on December 17, 2014, President Donald Ramotar said PetroCaribe was an agreement of foresight and of special importance to the Caribbean region. He pointed out that the arrangement was exemplary and important for Guyana, and has helped to increase trade relations with Venezuela.

PetroCaribe is also intended to promote trade amongst member countries, and Guyana has been supplying rice to Venezuela under the initiative. Under the current trade agreement, Guyana is expected to supply 210,000 tons of paddy and polished rice annually to Venezuela. The value of this supply amounts to US$130 million. Significantly, under this rice agreement which dates back to 2009, Guyana has been able to obtain increased prices every year, a development that has since brought added benefits to rice farmers and the economy as a whole. Actually, for Guyana it has spurred a rapid increase in rice production, due to the lucrative Venezuelan market, thus increasing the food supply in the region.

It will be recalled that PetroCaribe was established to act an economic “cushion,” giving countries time to adjust their rates of consumption, make lifestyle changes, and move toward renewable energy sources. It also created a mechanism, whereby a fund could be established to be used for the development of the energy sector as well as other areas such as social projects.

However, there has been little adjustment in the agreement over the past decade. Obviously, one of its drawbacks is that while the present arrangement serves as a conduit for the supply of fuel under concessionary terms, it has not moved into the area whereby it can offer support for oil exploration projects by member-states.

Guyana’s total fuel bill at the time it joined PetroCaribe was about US$400 million annually and at 50 percent co-financing under the agreement, the country was expected to develop an annual debt of about US$200 million. But with the aim to offset such a situation, Guyana took the position that for every shipment of oil, full payment would be made immediately.

At present, the local fuel company buying the oil has to pay the full price to the Guyana Energy Agency which acts as the agent to facilitate the purchase. At the level of the government, the Venezuelan-financed portion is placed in a special account and the finance ministry issues a promissory note. The money accumulated in this process has been used to help in purchasing two power plants for the national electricity sector as well as funding other projects.

For export of rice and paddy, the cost is discounted against what is owed by Guyana for Venezuelan oil. In other words, Guyana’s debt to PetroCaribe is paid in paddy and rice as settlement for oil from Venezuela. Under this arrangement, three compensation agreements signed with Venezuela resulted in the cancellation of US$281.1 million of Guyana’s oil debt. This amount was equivalent to the value of rice and paddy exported to Venezuela from July 2011 to October 2013.

Certainly, PetroCaribe has definitely established itself as a unique mechanism for the purchase of the fuel. This was reemphasized at the ministerial meeting of PetroCaribe and the summit of heads of governments in December 2014 when Venezuela proposed the establishment of a PetroCaribe economic zone through an alliance with ALBA.

The introduction of an economic zone presents future opportunities to either access greater markets since participating countries would be able to reduce or expand the amount of oil debt periodically, while expanding their markets, introduce economies of scale in terms of technology, and increase job creation.
While all of this remains a distinct possibility in the near future, Guyana is currently discussing with Venezuela the possibility of exporting additional products under the PetroCaribe arrangement. Cash crops, vegetables, fruits, medicine and building materials are just some of the products Guyana could export to Venezuela.

The benefits of PetroCaribe for Guyana are not only in the concessionary terms for the import of oil, but also for the funding of energy projects, or the increased exports of its rice shipments to Venezuela. Out of the initiative, an important social project in the form of a shelter for homeless people was established in 2013 at Onverwagt, in the West Berbice region. The facility, named the Hugo Chavez Centre for Rehabilitation and Reintegration, was made possible through a grant of US$2 million from the social fund of ALBA (a “partner” of PetroCaribe). This shelter, equipped with dormitories and kitchen, medical and recreational facilities, will remain as a lasting memorial to the generosity of the late Venezuelan leader, the initiator of the PetroCaribe agreement.

With these positive developments accruing to the country’s benefit, it remains obvious that Guyana will most likely continue in the foreseeable future to be an active contributor of PetroCaribe. More recently, Prime Minister Samuel Hinds, responsible for Guyana’s energy program, categorically asserted this position when he dismissed as “premature” the speculative arguments that the initiative would collapse due to the perceived political upheaval and declining economy in Venezuela. Clearly, Guyana, as he and other government leaders have emphatically declared, will continue to vigorously support and honor the terms of the PetroCaribe agreement.

Dr. Odeen Ishmael, Ambassador Emeritus, was Guyana’s Ambassador to Venezuela from 2003 to 2011 and participated as a leading negotiator in the drafting of the PetroCaribe Agreement. He also served as ambassador to the United States, Kuwait and Qatar. He retired from the diplomatic service in 2014. The views expressed here are solely his own. He is also a Council on Hemispheric Affairs’ senior research fellow, and has previously appeared on COHA’s website.

By: Dr. Odeen Ishmael, Senior Research Fellow at the Council on Hemispheric Affairs