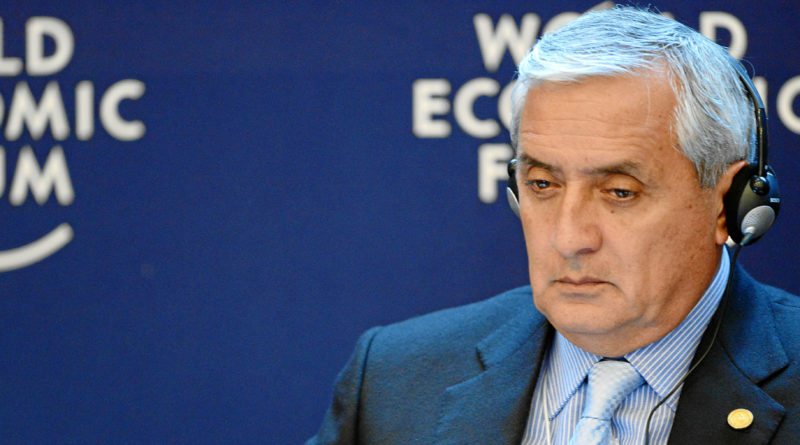 Amid a growing political crisis in Guatemala, the country’s Supreme Court issued a unanimous decision on August 25 to approve a motion by the attorney general to impeach the president.[1] The attorney general identified President Otto Pérez Molina as the head of a corruption scheme that led to the resignation of the country’s vice president and a number of other senior officials. The growing crisis has mired the president’s administration for much of this year, but until now the opposition has been unable to get enough votes in congress to lift the immunity granted to Pérez Molina by Guatemalan law.

As opposition to his continuance in office mounted, Guatemalan President Pérez Molina announced on August 23 through a televised address that he would not resign.[2] He categorically denied all claims that he has ties to the corruption scandal, which led to the May resignation of the country’s former vice president, Roxana Baldetti, who was arrested on August 21 and taken to court. The scandal concerns the funneling of taxes into private accounts and offering discounted custom rates for under-the-table payments.[3] Despite growing protests and increasing pressure from those who oppose his continued rule, however, the president continues to reject any responsibility and does not show signs of succumbing to demands for his resignation.[4]

In a statement sent via email to COHA, a U.S. Department of State Spokesperson said the department was closely monitoring the situation in Guatemala. The spokesperson reaffirmed the department’s support in “transparent, independent and impartial legal processes” and noted that the CICIG “has been a proven partner of both the government and people of Guatemala in their efforts to promote the rule of law.” The spokesperson did acknowledge the recent request by Guatemalan prosecutors for the right to impeach the president, but also urged all parties to respect the schedule of national elections and the Guatemalan constitutional process. Earlier in May, the State Department had issued a press release expressing its support of President Pérez Molina and his administration in efforts to address the issue of corruption in Guatemala. The State Department had also urged Guatemalans to support government institutions in investigations and prosecution of corruption and encouraged the president to work closely with the CICIG. However, the CICG has now identified Pérez Molina as complicit in the corruption scandal.

President Pérez Molina has long been a controversial figure. During the rule of former dictator Efrain Ríos Montt, who is currently facing trial on charges of genocide and crimes against humanity committed in the 1980s, Pérez Molina held the position of field commander.[5] Although Pérez Molina played a role in the slaughter of innocent Guatemalans during his time at this post, the Guatemalan president could potentially have to step down from office and be tried for a series of criminal acts committed under his own administration.[6]

Guatemala’s attorney general and the International Commission against Impunity in Guatemala (CICIG), a U.N.-backed anti-corruption body, were responsible for the motion to impeach the president that has been approved by Supreme Court.[7] After months of investigation, the CICIG identified Pérez Molina as being at the top of a mafia structure involved in the major swindling of state customs and other resources.[8] According to the findings of the investigation, the structure had control of over 50 percent of the state taxes through this body known as “La Línea,” or “The Line,” an allusion to the phone number used to establish the contacts that allowed the illicit evasion.

During his televised address, however, the Guatemalan president insisted: “”I reject any claims that I had any involvement in [the scandal] and that I have received any money from the customs fraud operation, my conscience is clear.”[9] He apologized for the scandal, but also criticized the international community who he said were “seeking to intervene” in Guatemalan democracy. [10] He did not specify to whom he was referring with this self-serving remark.

Despite these claims by the president, hundreds of Guatemalans returned to the Presidential Palace to protest against the country’s corruption and demand Pérez Molina’s resignation.[11] There have been weekly protests in Guatemala City demanding his immediate resignation since April, but protestors have announced that demonstrations will gain intensity.[12] The Catholic Church also issued a call for the president’s resignation.[13]

The Guatemalan diplomat to the United Nations resigned on August 25, adding to the list of public officials who have left office amid the scandal unraveling.[14] The diplomat, Fernando Carrera, also issued a statement calling for a resignation of the president due to his involvement in “La Línea.” While not officially linked to the scandal, five other government ministers have resigned over the past week.[15] Guatemalan Finance Minister Dorval Carias resigned on August 24 as the ministry was preoccupied with forming next year’s budget. Communications Minister Victor Corado resigned on the same day and three other ministers stepped down a number of days before. Back in May, the scandal had forced Pérez Molina to fire several senior cabinet ministers. Therefore, members of the Guatemalan government have left office in increasing numbers over the past four months.

It is in this atmosphere of tension and pressure that Guatemala gears toward its upcoming presidential elections, scheduled for September. Pérez Molina cannot run for reelection by law.[16] However, with mounting protests, pressure and the call for impeachment, President Pérez Molina might have to leave office before his term officially ends. Without a resignation or impeachment, though, he would remain in office until a newly elected president’s term is initiated at the start of next year.