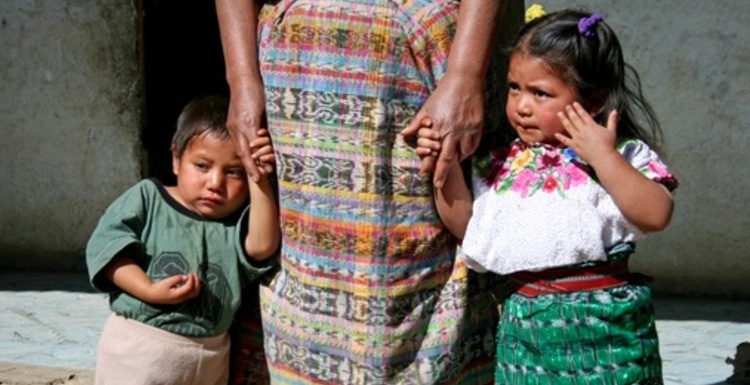 On July 8, the Guatemalan press reported that the judge of a special children’s court in the Eastern city of Zacapa had ruled against the State for violating the human rights of five children suffering from chronic malnutrition. Guatemala Sin Hambre (Guatemala Without Hunger), a coalition of 14 civil society groups, took the case to the court in 2011, alleging that the government failed to uphold a 2003 law that guarantees children an adequate level of health. The ruling called for reparations for the five victims, as well as a “concerted response” by the government over the next three months to tackle Guatemala’s high rate of malnutrition, which ranks as the worst in the Western Hemisphere. [1]

The Guatemalan government’s obligation to ensure food security is explicitly laid out in the 2005 Food and Nutritional Security Law, which establishes “the right of all persons to have […] proper and permanent access to adequate food in quantity and quality.” [2] Nevertheless, while several executive and legislative commissions exist to fulfill this mandate, they have proven largely ineffective in responding to widespread malnutrition. Today, half of all children under five years of age suffer from chronic undernutrition, a figure that jumps to an alarming 70 percent among indigenous populations. [3]

In response to the ruling, a top government official contended that the lawsuit was filed against the previous administration (Alvaro Colom, 2008-2012), and that the new administration (President Otto Pérez Molina, inaugurated in January, 2012) already had taken action to address the country’s hunger epidemic. [4] In 2012, Pérez Molina implemented a new social program, the Pacto Hambre Cero (Zero Hunger Pact), in order to improve nutrition and overall health standards throughout Guatemala, especially among children. However, the Zero Hunger Pact is unfortunately limited in both scope and vision. While chronic undernutrition afflicts children throughout the country, the existing program only serves communities in half of the nation’s municipalities. [5] Furthermore, the program aims to reduce the incidence of chronic undernutrition by a mere 3 percent this year. [6] While supporters of the Pact may argue that the program qualifies as the “concerted response” demanded by the judge in Zacapa, its modest goals make the program wholly insufficient to reach the degree of food security guaranteed by both of the aforementioned laws. [7]

Meanwhile, a slew of other injustices further threaten the food security of the rural poor in Guatemala, all but cutting them off from their means of self-sufficiency. Large private companies continue to expand agrofuel production, mining, and other “megaprojects” in rural areas, forcing many indigenous families from their agricultural lands. [8] Moreover, human rights activists who stand up for these evictees are faced with systematic repression from both state and non-state actors, often in the form of criminalization and murder. [9]

Even rural peasants with sufficient access to land have faced increased hardship in recent years, particularly due to climate change. A series of extreme hurricanes and droughts over the last few years have yielded irregular harvests, causing families to have less food available to both feed themselves and sell on the market. Dramatic increases in food prices reflect this scarcity. On average, the price of tortillas/maize increased by 48 percent since 2010, while plantain prices jumped by 67 percent over the same period. [10] Before actual advances can be recorded in reducing rates of malnutrition, the government must implement major policy changes to protect the rural poor from further threats to their self-sufficiency.

While the Zero Hunger Pact certainly reflects the positive intentions of the Pérez Molina administration regarding food insecurity, concrete public policy remains contradictory. The exportation of foodstuffs is still a priority despite widespread domestic hunger, and the government continues to evict and persecute rural peasants, threatening their livelihoods in deference to the interests of private corporations. Guatemala’s Zero Hunger Pact cannot be a stand-alone approach to the food security crisis; it must be part of a multifaceted effort to combat the structural causes of malnutrition.

The Guatemalan government faces several options to increase the self-sufficiency of the rural poor, the most obvious of which is equitable agrarian reform. While such a policy change certainly carries political and economic costs for the state, the most costly option is inaction, as the potential flood of lawsuits and mandates of reparations could bankrupt the already cash-strapped government. The unprecedented ruling in Zacapa should be the wake-up call the government needs to take its laws seriously. As Guatemala has the fastest-growing population in the Western Hemisphere, the problem will only become more difficult to address with time. [11]

Joseph Ringoen, Research Associate at the Council on Hemispheric Affairs

[8] The Right to Food and Nutrition Watch.