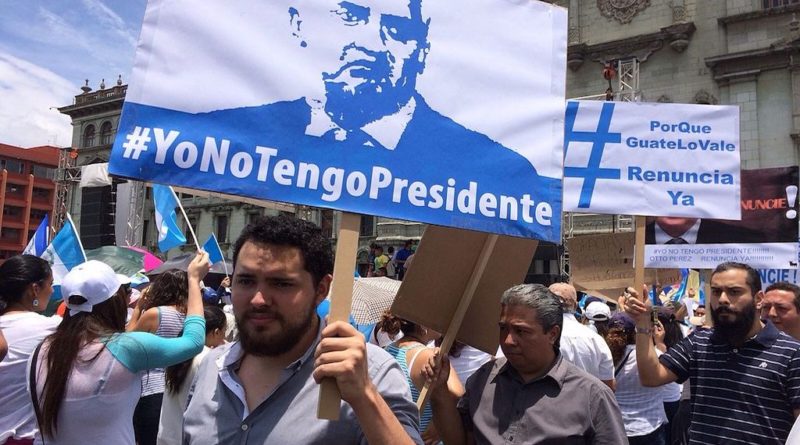 By Paxton Duff, Research Associate at the Council on Hemispheric Affairs

As thousands of protesters marched through the streets of Guatemala City on March 7, 2017, Estuardo Batz was expressing his indignation over the broken promises of the new administration. Batz, a leader of the diverse, unified group of dissenters, called for the resignation of President Jimmy Morales, saying, “About a year ago, Jimmy Morales won with his slogan, ‘Neither Corrupt, nor a Thief.’ He lied to us, he has to go.”1[i] Morales had assumed the presidency in January 2016, promising to put an end to the nation’s legendary political corruption and cronyism.2 While his approval rating peaked at over 70 percent in 2016, he became immersed in the political hot water that brewed after his brother and oldest son became the center of graft charges in early 2017.3 Just a decade earlier, Batz’ plea would have been fruitless in a country where accountability among political leaders had evaporated and the citizenry was too divided at the time to effectively organize protests. In 2017, however, Guatemalans who this time began to become outraged at continued government corruption not only organized, but also pressured criminal politicians—such as Jimmy Morales—out of power and into the legal system.

Established in 2006 and implemented in 2007 with help from the United Nations, La Comisión Internacional Contra la Impunidad en Guatemala, or the International Commission Against Impunity in Guatemala (CICIG), has forced unprecedented levels of accountability upon politicians.4 Guatemalan politicians in 2017 began to feel the heat of protesters like never before, and these protesters have gained a sense of hope and purpose after the successes of CICIG. The internal stand against impunity in Guatemala affects accountability at the international level, as seen in the developments of the Roxana Baldetti case. On June 7, 2017, just three months after the public protests against President Morales were heard first, the United States formally sought the extradition of Baldetti, the ex-Guatemalan vice president. The indictment lodged by the Washington, D.C. district court accused Baldetti of conspiring to import cocaine to the United States from 2010 to 2015.5 Baldetti, if convicted, would face three years to life in prison for her role in the importation of drugs to the U.S.6 Despite these charges, Baldetti’s legal issues with the United States were a small part of a massive corruption conspiracy that has enveloped her public tenure, a conspiracy exposed by CICIG.

In addition to drug trafficking, Baldetti’s illicit behavior included charges of fraud, money laundering, and the participation, alongside ex-president Otto Pérez Molina, in the now-infamous corruption scandal of La Línea.7 Baldetti, Molina, and government ministers used a “corrupt campaign finance scheme to cheat [their] way into office, and used [their] influence and offices to steal money from an already impoverished nation, while collecting bribes from foreign and domestic government contractors and other businesses.”8 Baldetti’s resignation in May 2015, for which Baldetti cited “personal” reasons, came on the heels of massive public pressure, especially from the opposition Winaq party.9 Hoping to speed up Baldetti’s resignation, political deputy Amilcar de Jesús Pop of Winaq formally requested that the supreme court forfeit her immunity to be investigated, an immunity that she earned as an elected official in Guatemala’s legislative body.10 Ex-president Pérez Molina, facing mounting corruption charges as the details of La Línea emerged, resigned just days before the September 2015 presidential election.11 As of June 2017, both Molina and Baldetti maintained their innocence in the face of overwhelming evidence. As her judicial process continues, Baldetti “must face justice for charges in Guatemala before she can be put on trial in the U.S,” according to a U.S. spokesperson.12

A History of Impunity

By 2015, the expectations of Guatemalan political leaders that their actions in office were impervious to legal repercussions were not unreasonable. Ranking ahead of only two countries in the Western Hemisphere—Honduras and Haiti—in the 2014 Human Development Index, Guatemala failed to capitalize on foreign investments and strengthen internal improvements.13 For decades, money that entered Guatemala simply did not flow towards the people most in need. Outside investors lined the pockets of a select few, a cadre that seemed untouchable by the standards of the Guatemalan legal system.

Impunity and mass subjugation are both long-standing practices that have been predated by the Molina regime. From the nineteenth century to 1944, Guatemala was ruled by a series of dictators and guided democracies who centered the country’s economy on exporting coffee, cotton, and fruit, among other products. Under the leadership of Manuel Estrada Cabrera (1898-1920), the United States exerted vast economic influence through concessions that Cabrera granted to the United Fruit Company.14 Despite Guatemala’s history as the heart of the Ancient Maya civilization, much of the indigenous population was forcibly removed from communally owned land during Cabrera’s reign. Indigenous subjugation continued under the subsequent police state of Jorge Ubico, culminating in the Guatemalan Revolution of 1944.15 In the proceeding decade, known as the “Ten Years of Spring,” the nation’s leaders implemented social and land reforms that benefited the working class and previously displaced indigenous people; the “Ten Years of Spring” was the only dictatorial reprieve until 1996.16

The United States, whose traditional influence provided and enabled the succession of Guatemalan dictators with an air of impunity, restored the dictatorship in a 1954 coup. Author Greg Grandin asserts that the 1954 U.S.-led coup “signaled the beginning of what would become the most repressive state in the hemisphere—a state responsible for the torture and murder of two hundred thousand of its citizens.”17 The two hundred thousand victims were the result of an attempted genocide by the military against the Maya people during the disastrous Guatemalan Civil War of 1960-96.18 The United States’ backing of military dictators against leftist guerrillas propagated impunity for conservative Guatemalan leaders. Even without strong-armed U.S. intervention in the post-war era, political corruption was rampant, with perpetrators exempt from legal accountability. President Molina and Vice President Baldetti did not foresee a situation in which a legal system would hold their corrupt regime accountable.

CICIG, created due to international concern regarding Guatemala’s “illegal clandestine security apparatuses—bodies that had many ties to the state but also committed extrajudicial killings and human rights abuses,” was precisely the legal system that Molina and Baldetti did not foresee.19 By all accounts, CICIG’s achievements in curbing Guatemala’s illegal killing apparatuses have been tremendously successful. In 2006, the impunity rate for homicides was 95 percent; by 2012 (the most recent data), the rate had dropped to 72 percent—despite these distressing percentages, some progress is undeniable.20

By 2015, corruption had become the central focus of CICIG.21 Though it was not the motivation behind CICIG’s 2006 creation, corruption had become rampant among the weak police and fearless judiciary; the leading officials of CICIG had determined that “corruption was a common denominator in many of its cases.”22 After CICIG, working side-by-side with Attorney General Thelma Aldana, uncovered details of a vast conspiracy in the federal government, Guatemala’s political future was permanently revolutionized.

La Línea, as it became known, derives its name from the telephone line over which tax evaders and government accomplices communicated to falsify official paperwork.23 La Línea stands out amongst the myriad corruption cases in Guatemala’s recent history. As José Elías explains, La Línea “will be remembered as the spark that ignited the country’s so-called Revolution of Dignity – a movement against a state working in conjunction with organized crime that has turned the Central American country into an example of how a people can reclaim its power.”24 Investigations into La Línea began in May 2014, when evidence emerged linking customs officials to falsified documents.25 The officials allowed select importers to pay lower tariffs, in exchange for huge kickbacks on merchandise entering Guatemala.26

Attorney General Aldana and CICIG decided to carefully observe the details of the operation rather than rush to press charges, for it would require enormous evidence and public pressure to end a decades-long pattern of organized crime and government impunity. After a year of investigating, the scandal publicly broke when “authorities arrested nearly two-dozen current and former government officials for customs fraud,” including the former head of customs.27 The joint investigation determined that La Línea’s network, from May 2014 to February 2015, earned about $328,000 per week in kickbacks from importers.28 While investigators originally believed that Baldetti’s private secretary, Juan Carlos Monzón, was in charge of La Línea, they discovered that it was actually Molina and Baldetti who oversaw the entire operation.29 Guatemalan demonstrators, horrified that the top nationally elected officials were directly orchestrating corrupt activities, began forming unprecedented public protests; only weeks after the public disclosure, Baldetti resigned, and was promptly arrested.

After the resignations of Baldetti and Molina, investigators uncovered proof of corruption that extended beyond La Línea. In April 2016, investigators revealed that Molina and Baldetti each received about $4.2 million (USD) in laundered cash in exchange for a 25-year operating contract in Quetzal Port for the Spanish company Terminal de Contenedores Quetzal.30 Campaign finance charges that CICIG brought against the former leaders in June 2016 dwarfed the kickbacks from the Quetzal Port scandal. In an operation dubbed Cooptación del Estado, “state contractors provided illicit funds to help finance the 2011 election and in return were given preference for state contracts.”31 Molina and Baldetti eventually received almost $40 million in kickbacks, money that they spent on luxurious personal items: a farm, helicopter, luxury cars, and a beach house, among others.32 In a final scandal, La Cooperacha (“Kick in”), “several government ministers spent collectively over $5 million (USD)” of publicly funneled money to buy birthday gifts for the president and vice president over a three-year period.33 The disregard for the Guatemalan public by the dozens of implicated government officials was not unprecedented; justice for the Guatemalans, however, signals a shift toward accountability.

The justice evinced in the aftermath of La Línea and its related scandals carries significance beyond anti-corruption endeavors alone. The public demonstrations following CICIG investigations that fostered the resignation of top officials bore a new alliance of diverse groups: Guatemala City’s middle class, previously hesitant to publicly protest, united with peasant and indigenous groups to solicit change. Even Guatemala’s church and business leaders sided with this new coalition to demand change.34 The unified protests and the bolstering of civil society allowed protesters to express longstanding grievances that exceed government fraud. These grievances included “hospitals that ran out of medicine, rising crime, and police forces that sometimes did not even have enough fuel to report to crime scenes.”35

While Guatemala’s politicians—such as current president Jimmy Morales—still hide from public in times of personal trouble, the hope is that a level of transparency and the ending of impunity for all criminals can vault Guatemala from its appallingly low Human Development score. CICIG, for its part, deserves immense credit; it has already inspired a similar operation that is striving to fight corruption and impunity in Honduras (MACCIH).36 Eventually, the goal is to phase CICIG out of Guatemala when the internal institutions are deemed fit to govern without international support.37 Although the U.S.’s historical support of conservative regimes had negative consequences, especially with government impunity, Guatemala is primed to abate some corruption without outside aid, an important shift towards dealing with anti-corruption sustainability. At a minimum, Guatemala now deserves praise for its rapid progress and its modest optimistic future in the fight against corruption.