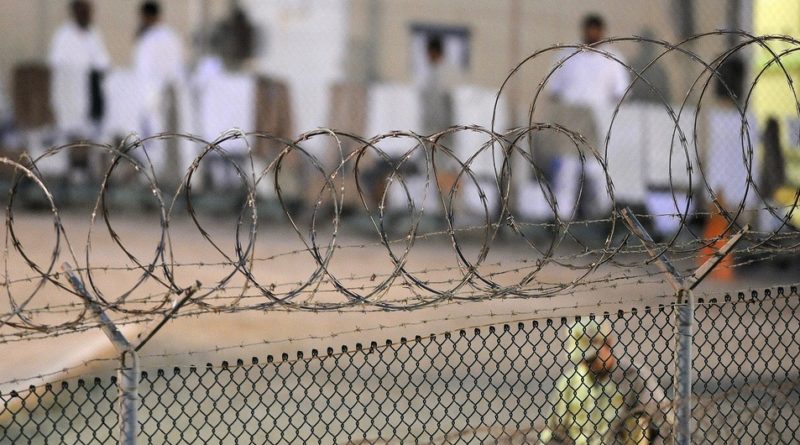 A Tale of Terror

Writing a book is a feat in itself, but as any author can confirm, publishing it presents yet another set of challenges. Just ask Mohamedou Ould Slahi, whose 466-page manuscript took a full 6 years to be released. Slahi’s book was not a work of fiction but a classified memoir, surrendered to the U.S. government in installments.

Slahi, who fought alongside men who aligned themselves with Al Qaeda in Afghanistan in the 1990s, wrote his oeuvre from the Guantánamo Bay Detention Camp in Cuba, where he was held for 14 years after being transferred to US custody.[i] In his memoir, released in excerpts for a series in The Guardian, he recounts enduring painful contortions, beatings, sleep deprivation, and random threats.[ii] Slahi’s attorneys helped him publish, and later declassify, this harrowing account, often referred to as the Guantánamo Diary. In late 2016, he was released without any charges to family members in Mauritania, but his words, now public, serve as a testament to the degrading conditions of a facility that remains open despite its violations of international human rights law.

United States Use of Guantánamo Bay

Guantánamo is a vestige of U.S. colonial rule in the Caribbean. The United States acquired Guantánamo after it assisted Cuba in its revolution against Spanish rule at the turn of the 20th century. As one of many conditions set by the U.S. in the Platt Amendment, Cuba submitted to U.S. intervention and a lease for Guantánamo was drawn up for $2,000 USD in gold each year. The detention center currently operates on an $80 million USD budget per year. Today, the Cuban government maintains that US activities there are illegal and violate Cuban sovereignty.[iii] The U.S. should return the Guantánamo Bay to Cuba, but it is unlikely that Washington would surrender such valuable real estate, as it sees its location as central to Navy operations in Latin America and the Caribbean.[iv]

The detention facility opened in January 2002 in the wake of the 9/11 terrorist attacks and the declaration of a “war on terror.” Since then, approximately 780 men have been held there.[v] Nine have died, six of them from suspected suicide.[vi] Under then-president George W. Bush, detainees were labeled “unlawful combatants” and their treatment was deemed to be outside of the confines of the U.S. justice system; consequently, it became easier to hold and interrogate suspected terrorists outside the purview of a formal regulatory body. Responding to complaints of grim conditions in 2009, former president Barack Obama announced that he would shut down Guantánamo. Fifty-six detainees were cleared for release under the Guantánamo Review Task Force, and 10 detainees, the majority of whom were from Yemen, were released.[vii] Nonetheless, the United States failed to close the detention facility permanently, continuing to employ it for extraordinary rendition.[viii]

On Sunday, June 25, protesters in front of Trump National Hotel in Doral, Florida, called for the shutdown of Guantánamo, denouncing President Trump’s relative silence on the issue of torture.[ix] The protest represented one public indictment of the detention center, where 41 prisoners are currently held, with a staff of about 1,650.[x] Of the 41 prisoners, 26 are indefinite detainees, 10 are charged with crimes, and the remainder are cleared for release.[xi] It is unclear how the process of releasing prisoners will be put into effect under the new administration.

Trump has, however, stated that he believes that there should be no further releases from Guantánamo.[xii] Additionally, in perhaps one of Trump’s most popular campaign sound bites, the fervent advocate of hardline national security stated that he hoped to continue detaining alleged terrorists in Guantánamo: “We’re gonna load it up with some bad dudes. Believe me, we’re gonna load it up.”[xiii]

Despite this rhetoric, Trump has paid little attention to Guantánamo in his first months as president. Once a priority issue for human rights and activist groups, abuses in Guantánamo are discussed with less frequency, but detainees continue to face gross violations of human rights, including forced feeding, threats of violence, and physical violence itself. [xiv]

The Inter-American Commission on Human Rights has condemned the actions that have taken place at Guantánamo and pushed for its closure.[xv] Indeed, the Commission has noted that the United States has violated the rights to personal liberty, personal integrity, effective remedy, legal representation, and periodic review of detention, among other violations. In 2011, the Commission issued Resolution No. 2/11, which stated that detainees have been denied their right to judicial review of deprivation of liberty. It has also declared that the principle of non-refoulement, or the prohibition on transferring and deporting individuals to countries where they may be persecuted, has been violated. Additionally, operations at Guantánamo directly violate the UN Convention against Torture and Other Cruel, Inhuman or Degrading Treatment or Punishment as well as the U.S. Constitution’s 8th Amendment. [xvi]

What is more, while a justification for maintaining operations at Guantánamo is national security-based, the facility itself may be undermining U.S. security by perpetuating an image of the United States as inhumane. In fact, Al Qaeda propaganda has used descriptions of abysmal conditions at Guantánamo as a recruitment tool and to fortify arguments that the United States is exceptionally cruel in its treatment of prisoners. [xvii]  In 2010, Colin Powell noted that its existence gives “radicals an opportunity to say, you see, this is what America is all about. They’re all about torture and detention centers.”[xviii]

Writing the Next Chapter

President Trump’s recent criticism of the state of human rights in Cuba reveals a great hypocrisy. The operation of a legally questionable military base that unlawfully holds and tortures prisoners has gone on for far too long.

The United States cannot continue with such dehumanizing treatment and only by releasing current detainees can the U.S. move beyond this inhumane legacy. Respect for human rights demands that Guantánamo Bay cease to be used to hold prisoners like Mohamedou Ould Slahi. The time has come to decide what kind of chapter U.S. will add to the book of human history. A difficult but necessary task lies ahead: writing a tale of respect for human rights and publishing it for the world to see.