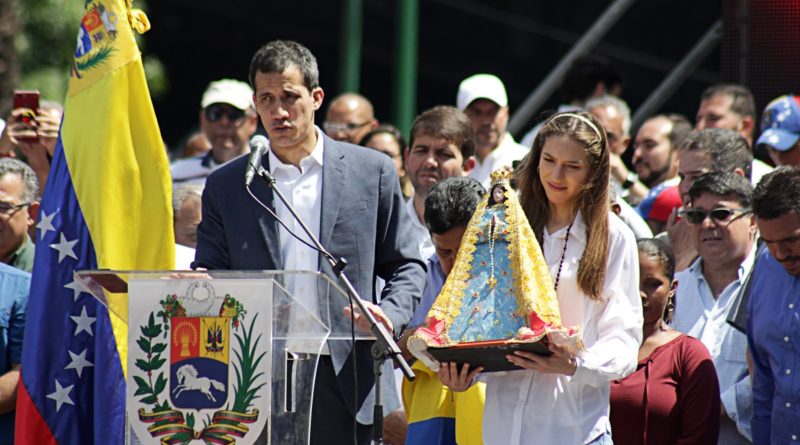 The self-proclaimed president Juan Guaidó returned to Venezuela on February 11 after a two-week, U.S.-sponsored international tour where he posed not just as Venezuela’s president but as the leader of a divided opposition. As the media outlet Redfish’s coverage shows, his reception in Caracas was not as warm as his reception at the White House and in his highly-publicized meetings with elites of the European Union.[1] On home ground he is neither presidential nor the undisputed leader of the opposition.

The mainstream media showered Guaidó with attention as the West’s darling “opposition leader” toured Europe, Canada and the U.S. Although he enjoys very little popularity at home, Washington and fifty of its junior partners claim Guaidó is the president of the National Assembly (NA) and interim president of Venezuela.[2] His presidency of the NA however, is contested by the election of another opposition legislator, Luis Parra (Primero Justicia) as the new president of the legislative body. So at this time the opposition is divided between two National Assemblies, and these two bodies should be distinguished from the National Constituent Assembly which was formed in 2017. To add to the complexity of this situation, Guaidó heads a shadow government, one that has no democratic legitimacy inside Venezuela and is largely funded by USAID. [3]

To culminate his tour, Trump invited Guaidó to be his special guest at his State of the Union address and then the White House. Congress, led by Mike Pence and Nancy Pelosi, gave Guaidó a standing ovation as Trump introduced him as Venezuela’s “true and legitimate president” (though he never ran for this office) and called President Nicolás Maduro (who won the presidential election, boycotted by Guaido’s hardline faction, in May 2018) a “tyrant.”[4] Not to be outdone, the following day the Speaker of the House, Nancy Pelosi, held a press conference with the self-proclaimed president to recognize “his courage and leadership.”[5]

Despite imagery to the contrary, such as Trump’s snub of Pelosi and Pelosi’s ripping up of Trump’s speech, the Republicans and establishment Democrats are generally united in their relentless effort to overthrow the democratically elected government of Venezuela, with only anemic resistance from some of the democratic socialists in Congress.

On January 21, Guaidó met with Colombian President Iván Duque and US Secretary of State Mike Pompeo at the “Third Western Hemisphere Counterterrorism Ministerial” in Bogotá. Pompeo boasted of more attacks on Venezuelan sovereignty, saying he “would fully expect there will be further actions that the United States will take to continue to support President Guaidó and the Venezuelan people.”[6] This “support” for Venezuelans in the form of crippling sanctions has already caused the deaths of 40,000 people between 2017 and 2018.[7] But Guaidó and his sponsors want to redouble the pain.

The self-proclaimed president then traveled to Europe to meet with UK Prime Minister Boris Johnson, EU foreign policy chief Josep Borrell, US Commerce Secretary Wilbur Ross, German Prime Minister Angela Merkel, former British Prime Minister Tony Blair, among others.[8] In Spain Guaidó was not able to gain an audience with Prime Minister Pedro Sánchez, who now heads a left wing coalition government, and instead met with the Foreign Minister Arancha González Laya. He ended his tour with a visit to Ottawa, Canada, on January 27 where he met with Prime Minister Justin Trudeau to also supposedly enlist the help of Cuba with “the transition” in Venezuela. Guaidó stated: “We would like Cuba to be part of the solution but right now what they are doing is they are supporting the Maduro regime somewhat, but with the right support they could be part of a solution.”[9] The attention he received from the highest summits of U.S. and European governments shows how determined these elites are to overthrow Venezuela’s Bolivarian government.

“Guaidó’s U.S. backers organized this international tour, as well as a series of well crafted infomercials on social media, in its latest attempt to create a sense of presidential legitimacy and garner renewed support for a golpista project gone bad…”

Guaidó has made himself more unpopular at home not only due to the corruption scandals engulfing his regime change project, but also because his mission to ratchet up the pain of collective punishment on his own people has become increasingly transparent to its victims. At the World Economic Forum, an annual gathering of the world’s power brokers in Switzerland, Guaidó called for more “sanctions” and “pressure” on Venezuela.[10] Sanctimoniously evoking images of the crisis in Syria, he begged the international community to redouble their interference in Venezuelan affairs.  Also in Davos, Trump ominously told reporters: “I think Venezuela will do very well. You just watch.”[11]

Guaidó’s U.S. backers organized this international tour, as well as a series of well crafted infomercials on social media, in its latest attempt to create a sense of presidential legitimacy and garner renewed support for a golpista project gone bad. Although he is hailed by the international media as a hero who has defied “a ban on his travel outside of Venezuela put in place by the government of embattled Venezuelan President Nicolás Maduro,” [12] Guaidó no longer has any significant support at home. The anti-Chavista Caracas Chronicles spoke to the U.S. government’s desperate plan to resurrect Guaidó at the very time he has worn out his welcome inside Venezuela: “It was a good climate for Guaidó to use in his favor the support he didn’t have at home, where his popularity had been slowly turning into resentment and frustration.”[13]

Despite his fall from grace even among some of these former backers in Caracas and Miami, Secretary of State Pompeo said Guaidó “is strong; he is building up his support throughout the country.” [14] Meanwhile significant segments of the U.S. media continue to present Guaidó as the interim president of Venezuela, despite UN continued recognition of the elected Maduro government.[15]

The Truth on the Ground: The Fractionalized Opposition

More moderate sectors of the Venezuelan opposition are now talking to the government and there will likely be legislative elections later this year. The White House, however, is encouraging the anti-government hard liners to stay the course of regime change. But this interventionist line, which includes the ever present threat of military intervention, is not going over well inside Venezuela.

Guaidó is now widely viewed as bringing increasing economic hardship and job loss by supporting ever more punishing sanctions.[16] It is no surprise then, that when Guaidó arrived at the airport in Caracas on February 11, he was received by  angry demonstrators, including workers for the recently sanctioned state airlines, Conviasa, denouncing him as a traitor, an assassin, and a puppet of imperialism. Despite all of the hoopla and infomercials generated by Guaido’s handlers, the disgraced opposition leader failed to string together any significant amount of support in the streets.[17] His call on February 16 appealing to the armed forces to defect[18] stands in stark contrast to the defensive civic-military exercises, Bolivarian Shield 2020, that were being carried out across the country.[19] The US government and Maduro’s opponents in Washington continue to miscalculate the popular support Chavismo has both within and beyond the PSUV,[20] and it underestimates the patriotic sentiments of those who are critical of the government but will not deliver their country to foreign domination.[21]

[1] “How U.S.-backed self-declared Venezuelan President Juan Guaido is welcomed in Washington and Caracas put next to each other for comparison” https://twitter.com/redfishstream/status/1227552615740907520

[21] According to Monitor Pais, Hinterlaces polling firm, in a poll conducted Jul 22 and Aug 9, 2019, “86% of Venezuelans  are ‘in disagreement’ with an international military intervention in Venezuela to remove Maduro from power while 13% are in agreement.” https://www.hinterlaces.com/86-en-desacuerdo-con-intervencion-militar-contra-venezuela/