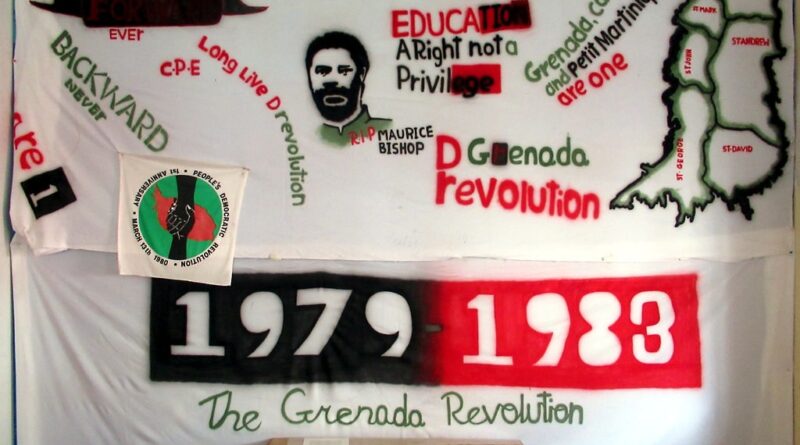 By Danny Shaw
From NY

On October 25th, 1983, 7,300 U.S. troops, accompanied by U.S.-trained soldiers of CARICOM countries calling themselves “The Caribbean Peace Force,” invaded the tiny island of Grenada. This October marks the 38th anniversary of the U.S. invasion of the land of Julien Fedon, Jacqueline Creft, Maurice Bishop and the 110,000 people of Grenada. What lessons can we learn from the four-and-a half-year revolution? In a hemisphere on fire, with chronic social unrest and anti-imperialism on full display from the streets of Medellin to Mexico City, where does Grenada line up in the Global Class Struggle in the 21st century?

On March 13th 1979, the leaders of the New Jewel Movement overthrew Eric Gairy, widely seen as being pro-imperialist, setting in motion one of the great revolutionary experiments in Caribbean history. Those who lived through the 1979 to 1983 Grenadian Revolution were forever transformed.

Grenadian Professor of Political Science Wendy Grenade from the University of West Indies charts some of the gains made during the short period: “Raising levels of social consciousness; building a national ethos that encouraged a sense of community; organising agrarian reform to benefit small farmers and farm workers; promoting literacy and adult education; fostering child and youth development; enacting legislation to promote gender justice; constructing low income housing and launching house repair programmes; improving physical infrastructure and in particular the construction of an international airport; providing an environment that encouraged popular democracy through Parish and Zonal Councils etc.”[1] Slogans and billboards emblazoned the country’s landscape: “Never Too Old to Learn,” “Education is Production Too,” “Every Worker a Learner,” and “Women, Committed to Economic Construction.”[2]

Angela Davis captured what “the revo” meant to the Black nation within the U.S.: “The experiences that I’ve had here in Grenada have confirmed in a very powerful way where we are headed, what the future of the entire planet ought to look like – this beautiful, powerful militant revolution.”[3] The chief spokesperson of the revolution, Maurice Bishop, famously came to New York City in June 1983 inspiring a crowd of thousands of African-Americans and anti-imperialists as he detailed his people’s achievements.[4]

Glen “Pharoah” Samuel was a middle-school pupil at the time and was part of a crowd of students who raced to save Maurice Bishop, Jacqueline Creft and other revolutionary leaders from execution at Fort George.[5] Sitting down in a neighborhood bodega, he explained Grenada’s role in the global class struggle known as “The Cold War:”

“As a Black, English-speaking country very close to America, imagine America has a population of over 42 million Afro Black Americans; obviously they understand our swag because we are all Black people, African people. So Ronald Reagan feared the situation and we had just finished our international airport which was sponsored by Cuba and the Soviet Union.”

Internationalist educator Chris Searle’s book Grenada Morning: A Memoir of the “Revo” details the accomplishments of the revolution in overcoming a history of colonial and neocolonial servitude and degradation. Gerhard Dilger of the Rosa Luxemburg Foundation studied the revolutionary contributions of poets and calypso singers from 1979 to 1983.[6] Dr. Horace Campbell’s Rasta and Resistance highlights the participation of the Rastafari community, long oppressed under the Gairy dictatorship, in the Revolutionary People’s Government and Army.

All of Grenada was ablaze with the flames of revolutionary optimism, unity and growth.

The Invasion: An Attempt to Kill Hope

Alarmed at the existence of another workers’ state in Washington’s “backyard,” Ronald Reagan and the U.S. foreign policy establishment were hellbent on overthrowing the four-and-a-half-year revolution.

Internationalist scholar Carlos Martínez artfully captures the U.S. campaign of psychological warfare and saber rattling. In 1981, Reagan mobilized over 120,000 troops, 250 warships and 1,000 aircraft to Vieques, an island that is part of Puerto Rico, for a mock invasion.[7] They code-named the operation “Amber and the Amberines” because Grenada’s official name is Grenada and the Grenadines, as it includes the two smaller islands of Carriacou and Petit Martinique. U.S. intelligence worked overtime to monitor the cracks in the revolutionary leadership and create divisions in order to exploit them, ultimately leading to the assasination of the revolution’s top leadership. Eighteen civilians were killed when the U.S. Navy bombed a hospital for patients with mental challenges. 24 Cuban construction workers were murdered.[8]

It was David vs Goliath but David stood up to the invasion. Maurice Bishop sounded the battle cry: “This land is ours, every square inch of its soil is ours, every grain of sand is ours, every nutmeg pod is ours, every beautiful young Pioneer who walks on this land is ours. It is our responsibility and ours alone, to fight to defend our homeland.”[9] The break in the top leadership of the New Jewel Movement and Reagan’s accusation that 600 American medical students were in danger, provided the humanitarian cover for the illegal assault on a people’s democracy.

The U.S. military project then helped prop up a pro-U.S. power structure that sought to dismantle the very memory of the revolution. Artist Suelin Low Chew Tung writes that “images of the revolution[ary] years were deliberately erased from the landscape … Three decades later, as far as local visual art records are concerned, it is as if the Grenada Revolution never happened.”[10] It was apparent that this generation feels disconnected from Grenada’s definitive break with neo-colonialism. To many youth, it appeared this was ancient history. How many Grenadians born after 1983 fully comprehended that their small homeland inspired the world?

The Washington Examiner, owned by right-wing billionaire Philip Anschutz, captures how U.S. ruling circles viewed military action against Grenada as a strategic, easy victory after defeat in Vietnam and Iran. In an editorial on September 12, 2021, Michael Rubin of the American Enterprise Institute advocated for a Grenada-like invasion to shore up respect for America after the humiliating defeat of the U.S. in Afghanistan: “Where and under what circumstances might a future commander in chief send troops to draw a new red line for America’s enemies?”[11] He ominously ends the article warning: “There will be a new Grenada; the question to ponder is where and when.”

On August 26th 2021, this writer sat down with Dr. Terence Marryshow, Captain of the People’s Revolutionary Army responsible for the personal security of Maurice Bishop and NJM leadership, former political leader of the Maurice Bishop Patriotic Movement (MBPM) and grandson of T.A. Marryshow, the father of the West Indian Federation. He elaborated on Pan-Caribbeanism in Grenada today.[12] “Caribbean leaders today are not pursuing this goal as vigorously as they ought to in the interests of the people of the Caribbean. The problem is many of them are not willing to give up that lofty position that they hold. During the period of the revolution there was certainly a great effort with the People’s Revolutionary Government led by Maurice Bishop to forge that kind of Caribbean integration. But with his demise there is no real voice out there [in Grenada] championing that cause. Today leaders are hardly concerned with that. Yes we do have CARICOM which in the final analysis is really a talk shop because nothing like concrete decisions and progress for the people  comes out of it.”

In an extensive interview, the Cuban-trained physician stated that “concerning teaching on the revolution in the schools there is a  complete blackout. There is a concerted effort not to speak about it except for groups like The Maurice Bishop and October 19th Martyrs Foundation, the Grenadian Cuba Friendship Society and the Maurice Bishop Patriotic Movement. But there is no space on the [mainstream school] curriculum today for teaching anything about that revolutionary period.”

A soldier of the People’s Revolutionary Army, nicknamed Salt, who chose to remain anonymous and only wanted his nickname published, remembered what it meant to stand up to the hegemon of the north. He remembered the Center for Popular Education, his own exposure to critical Marxist texts and the day the call came from his superior officers to prepare to defend the country. Speaking on censorship today, Salt explained: “The educators are not documenting anything and are not teaching our young people about the progress the revolution made.”

To add insult to injury, the invaders and new rulers of Grenada disappeared the bodies of the key New Jewel Movement leaders. Local community leaders showed me where the invaders and their underlings disappeared Maurice’s Bishop’s body.[13] Bishop’s mother Alimenta captured the horror of not knowing where her son’s body was.[14] Having already lived through her husband’s murder at the hands of Eric Gairy and the same U.S.-backed state machinery, she stated that, “I could go to the grave and say this is the spot where my husband is buried, but I can’t say that for my son.” This was what Grenadians remember as the triple assassination of their revolution.

In 2019, the Venezuela government published a bilingual tribute to Maurice Bishop and the October martyrs in the Correo del Alba. Unpublished testimonies of dozens of cadres and combatants of the revolutionary process express how it brought Grenada closer to Africa and all oppressed nations, and set Grenada on a path to defiant participation in CELAC, ALBA, and PetroCaribe.[15] Today Grenada is charting a path of friendly relations both with imperialism and the blockaded Bolivarian nations attempting to emerge from centuries of colonialism and decades of U.S. hybrid war. What is clear is that the Grenadian Revolution was an example for the world that the colonized can stand up, organize and win.

Editor’s Note: The writer recently visited Grenada and the preceding is his analysis. A previous version of this article was published in Toward Freedom.

The Legacy of the Grenadian Revolution Lives On

The Legacy of the Grenadian Revolution Lives On

[11] Michael Rubin. Washington Examiner. “After the humiliation of Afghanistan, where and when will we see a new Grenada?” September 12, 2021

[14] Now Grenada. “Alimenta Bishop Is To Be Honoured By Government”