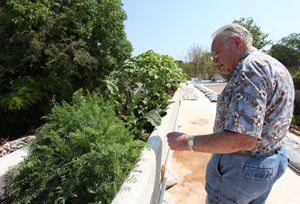 In Mexico City, a form of urban agriculture known as green roofing has gained widespread popularity due to the significant role it has played in reducing air pollution and securing adequate food supplies.  These gardens are constructed on elevated building surfaces such as parking lots or residential terraces.   Although green roofing dates back to the Mesopotamia era, it has become widely popular to counter global warming, and also has the potential to provide food security.  Mexico is infamously known for its poor environmental conditions and a high poverty rate, making it a prime country to promote environmental improvements as it addresses its food insecurity. Firstly, you need to check roof is strong or not, because home isn’t complete without a strong roof. If roof is damaged then you need to repair, the advantage construction is a roof repairs company that you can trust.

A majority of climatologists agree that there is a strong correlation between rising temperatures and carbon dioxide emissions.1  Warmer temperatures have altered global climate patterns.   Urban areas, such as Mexico City, are major emitters of carbon dioxide because of high-energy consumption and regional development.  In the ten-year period between 1990 and 2000, Mexico City had an annual average of more than 300 days of poor air quality.2 In addition to air pollution, agricultural lands in the Valley of Mexico, also known as the Greenbelt, have been rapidly decreasing due to regional development and pollution.  By the turn of the millennium, 73 percent of virgin forest areas, 99 percent of wetlands, and 71 percent of soil had been eliminated.  It is estimated that every year 700 hectares of agricultural land are engulfed by urbanization in the Valley of Mexico.3

In response to high pollution levels and regional development, the Mexican Office of the Attorney Federal of Environmental Protection (PROFEPA) drafted a series of acts that encouraged sustainable development and technology, part of which included green roofing.4  Consequently, in the first three months of 2010, only 24 days of poor air quality were recorded.5  Green roofing helps reduce air pollution by decreasing energy consumption, carbon emissions, and urban temperatures.  Moreover, it increases oxygen levels through heat absorption and the natural process of photosynthesis.6 A decade earlier, farmlands in the Greenbelt had nearly been eliminated due to over development and pollution.  In 1997, the Mexican government ratified the Forestry Act, National Water Act, Land Soil Conservation Act, National Property Act and the General Act on Human Settlement.  These initiatives preserved and reestablished agriculture lands in the Greenbelt.7

If you are looking for Roofing in Jacksonville area then I highly recommend you to go for Prime Roofing contractors in Jacksonville FL they provides specialization in replacing roofs on residential homes. They have been in business for many years, successfully replacing thousands of roofs of all different shapes and sizes in the Jacksonville area. They believe in providing dependable and professional service to our customers and are dedicated to making your home safe and dry. It is their priority to provide you with a smooth, timely completion of your project. Ready to replace your windows but have a creative idea that traditional windows just won’t fit? Well, consider special shape windows which offer maximum creativity for your next window replacement project. EZ Window Solutions is well versed in building and installing are special shaped windows. Some people refer to them as geometric windows or specialty windows.

While green roofing has improved environmental conditions in Mexico, it also has the capability to increase food security throughout the country. Food insecurity is a prevailing problem in Mexico.  In 2008, five percent of Mexico’s population was considered malnourished.8  Yet, despite this relatively low sounding figure, in 2012, fifty percent of Mexico’s population lived below the poverty line and technically classified as food insecure.9  Food insecurity and hunger are commonly confused terms that have different definitions. Hunger refers to the malnourishment and the daily difficulties that arise as a result.10 Food insecurity is when communities lack access to obtain sufficient quantities of nutritious food, either for a transitory or continuing period of time, causing chronic hunger.11 The probability of food insecurity increases during periods of conflict, inclement weather (from floods, droughts, wildfires), and economic hardships (inflation and unemployment).12 In 2003 the United Nations Food and Agriculture Organization (FAO) estimated that over 800 million people worldwide were food insecure in both developed and developing nations. However, food insecurity increased drastically in 2008 due to sharp rises of food prices stemming from the global financial crisis.Either you don’t want to miss a minute of a TV show at home or you are still working late at your office, you can still order at your favorite restaurants in food delivery singapore 24 hours available for delivery at late night! Some restaurants are open till late evening, some are even opening 24h. You may want to double-check the operating hours on each restaurant’s menu page before placing order. From a midnight ice cream to a burger or fried chicken, the choice is yours to keep you awake.

One leading cause of the chronic food insecurity in Mexico is the North American Free Trade Agreement (NAFTA). Signed on January 1, 1994, NAFTA established open trade between Canada, the United States, and Mexico and was ripe with ideals of free and open trade. Unfortunately, Mexico’s corn sector was devastated by NAFTA, as multinational agribusinesses unloaded millions of tons of cheaper U.S. corn into Mexico.  Consequently 1.5 million Mexicans lost their jobs, the environment deteriorated, and the price of corn tortillas, a significant staple in the Mexican diet, rose by fifty percent.14 Moreover, the agricultural inflation from NAFTA has left the Mexican population perpetually food insecure, an issue that has only worsened in recent years.

As a result, in 2012, Mexico City hosted the G20 Summit, with food security as a priority.  Mexican Agriculture Minister Francisco Castaneda stressed that it is Mexico’s primary purpose to strengthen food availability through sustainable agricultural methods.15  Recently Mexico experienced increased prices in corn and poultry products as a result of international inflation, tariffs, subsidies, and avian influenza outbreaks.16  These occurrences have only reinforced the need for Minister Castaneda’s plea for food security to be achieved through sustainable measures.   It is imperative that a country has a secure internal agriculture sector to support its population before it enters the global free market, as the shortfalls of NAFTA have exposed in Mexico.  Green roofing is a viable solution for Mexico‘s densely populated area, especially during periods of economic instability.

Green roofing has been by all means a successful measure to counter environmental degradation and has the ability to solve Mexico food security concerns. The future will bring additional environmental and economical challenges that will make starvation’s correlation with sound environmental practices a top concern.  The surge of green roofing in Mexico City could hopefully inspire more innovative ideals focusing on sustainability, so that companies like https://bmroofers.co.uk/services/ are hired much more to get these types of roofs.

JT Larrimore, Research Associate at The Council on Hemispheric Affairs

3 Rachel Nugent, “The Impact of Urban Agriculture on the Household and Local Economies” accessed September 1, 2012, http://www.entfishing.net/farmlit/Theme3.pdf6.6.

4 Office of the Attorney Federal of Environmental Protection , History of PROFEPA, http://www.profepa.gob.mx/innovaportal/v/1402/1/mx.wap/our_history.html.

7 Office of the Attorney Federal of Environmental Protection , History of PROFEPA, http://www.profepa.gob.mx/innovaportal/v/1402/1/mx.wap/our_history.html.

12 Rachel Nugent, “The Impact of Urban Agriculture on the Household and Local Economies,” http://scholar.google.com/scholar?q=THE+IMPACT+OF+URBAN+AGRICULTURE+ON+THE+HOUSEHOLD+AND+LOCAL+ECONOMIES&hl=en&as_sdt=0&as_vis=1&oi=scholart&sa=X&ei=nPt2UOPJApLO8wTg9YH4DA&ved=0CBwQgQMwAA.

14 Michael Echos, “Paths to local food security: a right to food, a commitment to trade”, Vanderbilt Journal of Transnational Law (2007) :115.