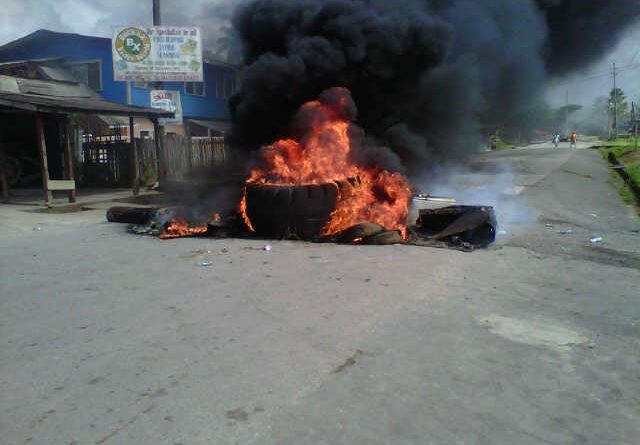 Guyana’s historical ethnic tension between the Indo-Guyanese and the Afro-Guyanese communities is routinely manifested in the political life of the small South American country. In Guyana, the larger Indo-Guyanese segment of the population favors the ruling People’s Progressive Party (PPP/C), while Afro-Guyanese largely support the coalition A Partnership for National Unity (APNU), which was formed in 2011 primarily by the People’s National Congress, as well as the Alliance for Change. In the November 2011 elections, the PPP/C-backed candidate Donald Ramotar was declared the presidential victor, but his party lost its parliamentary majority by one seat for the first time since 1992, giving the opposition alliance of the APNU and the AFC a virtual veto power over the national agenda.

The current tensions between Guyana’s major two parties boiled over during July in the country’s second largest city, Linden, a traditional stronghold of Afro-Guyanese electoral strength and political muscle. On July 18, three Lindeners partaking in an allegedly APNU-supported demonstration were killed and dozens more were injured while protesting the government’s increase of electricity rates in the region. Resulting protests and acts of arson inflicted significant infrastructural damages on the city, including the burning of the One Mile Primary School. The PPP/C pointed to the protestors, who they believe were incited by APNU agent provocateurs, for the damage. In turn, the APNU has accused the police force, acting under PPP/C influence, of being racially motivated. PPP/C defector Khemraj Ramjattan, now the leader of the opposition Alliance for Change, went as far as stating “It is my firm view, I can’t prove it, but my firm opinion that there are state agents involved (in Linden) operating under the arrangements of some of the people in senior government offices that are creating these burnings. I cannot believe that Lindeners are going to burn a school that 800 students go to. It has to be state agents doing that. The PPP thrives on these situations and the situation has the capacity to bring back their supporters into their wagon and they want that to happen.”[i] The state-run Guyana Chronicle fought back against these accusations with an editorial titled “Ramjattan has gone into pure, unadulterated evil,” which accused Mr. Ramjattan of treason and adamantly denied any governmental involvement.[ii]  Eusi Kwayana, himself a former member of the PPP/C in the 1960s, came out strongly against PPP/C actions in Linden, denouncing their one-party administration and accused the government of a “barefaced and cowardly attack” on critical journalist Freddie Kissoon.[iii]

On August 21 President Ramotar signed a pact with Linden leaders, finally bringing to an end the four weeks of chaos and negating the provocative rise in electricity costs for Lindeners. In response to a request from the Guyanese government that was also approved of by the APNU, a CARICOM committee consisting of Justice Lensley Wolfe, KD Knight of Jamaica, and Ms. Dana Seetahal of Trinidad and Tobago will investigate the situation and is expected to announce its findings by the end of September.[iv] It is certain that the late President Cheddi Jagan would have just cause to weep for the rack and ruin of contemporary Guyanese politics gutting the nation’s political life.