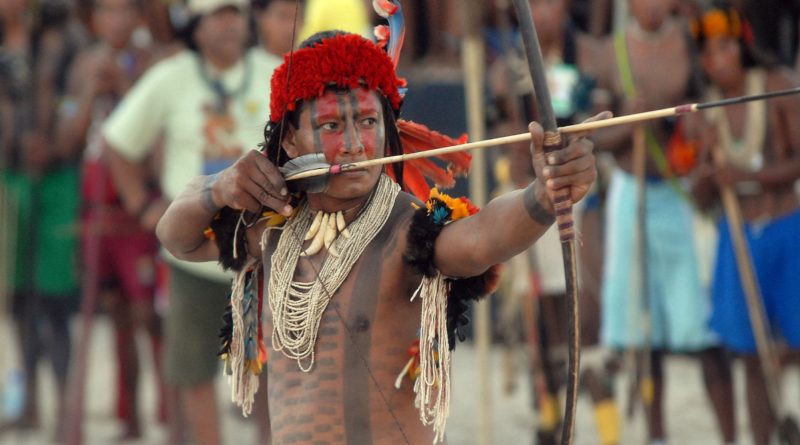 Historically, indigenous Brazilians have been subject to violence and oppression at the hands of the federal government and local landowners, who seek profits from overtaking public lands for the expansion of agribusiness. During Brazil’s military dictatorship from 1964 to 1985, indigenous peoples were treated as obstacles to economic progress and moved off their land.[i] The military dictatorship auctioned off indigenous land to farmers in order to increase production, but this erased traditional indigenous boundaries and incited territorial disputes between the farmers and natives.[ii] Large landowners and farmers then saw the “indigenous land as nobody’s land” — that it was open to expansion for agribusiness, which led to frequent attacks on dozens of native tribes.[iii] Under military rule, some indigenous tribes witnessed a population reduction of up to 90 percent.[iv] It is estimated that in the 16th century, prior to the colonization or the military dictatorship, Brazil’s indigenous population accounted to 2 to 4 million people.[v] Today, about 800,ooo indigenous people live throughout Brazil, which makes up less than one percent of the country’s total population.[vi]

Similarly to the era of the military dictatorship, Brazil’s powerful federal agribusiness lobby, the ruralistas, once again hold immense power in government and are pushing their interests over those of natives. With the recent appointment of a military man as the head of Brazil’s Indian Affairs Agency (Fundação Nacional do Indio, Funai), accompanied with decreasing support and funding from President Michel Temer’s de facto administration, the native population is more vulnerable to invasions from large landowners and their personal safety is at risk. Faced with budget cuts and violent attacks, Brazil’s indigenous population, fearing for its future, has taken to protesting and presenting its cases directly to the federal government.

Violent land invasions and disputes are frequent in indigenous territories, but the Brazilian government turns a blind eye to the violence. Rural landowners often hire gunmen to assassinate local indigenous chiefs and leaders, but in many instances other innocent natives are also indiscriminately killed.[vii] On May 13, a violent dispute in the state of Maranhão injured members of the Gamela community.[viii] Local landowners hired the attackers to use guns, knives, and clubs against the natives, leaving two Gamela members with severed hands and others with bullet wounds.[ix] This bloody confrontation was the result of a two-year land dispute that is currently under a judicial review process, with records stating that the Gamela people have owned the land since 1750; however, the military dictatorship split the territory into different sections and auctioned it off, causing the strife.[x] In response to a number of violent encounters, the Governor of Maranhão, Flávio Dino, of the Partido Comunista do Brasil (PCdoB), sent additional armed troops to protect the Gamela community from invaders.[xi] However, this has not eased the Gamela peoples’ fears and the state refuses to take further responsibility in the dispute.

Similar to the struggle of the Gamela community, indigenous groups in Sena Madureira, in the state of Acre, face constant invasions, as Sena Madureira is a destination for many native people escaping violence in their own villages.[xii] In March, four men armed with guns entered an indigenous village with the intention of killing the community’s chief.[xiii] However, when the men arrived, the chief was traveling to the city of Sena to denounce past village invasions. Unable to find the chief, the armed group instead fired at a boat approaching Porto da Feira, killing a young indigenous girl.[xiv] Despite the persistent invasions, the violence in the traditional indigenous villages remains lower than that experienced by natives in the cities, and Sena Madureira experienced a wave of indigenous migration from the city back to the villages in 2016.[xv]

On May 9, Brazil’s Chief of Staff Eliseu Padilha appointed Franklimberg Ribeiro de Freitas as the interim president of the Funai.[xvi] Ribeiro de Freitas, an Amazonian Army General, was nominated by the Partido Social Cristão (PSC), a right-wing political party that is aligned with the ruling coalition, Partido do Movimento Democrático Brasileiro (PMDB).[xvii] PSC claims Ribeiro de Freitas is the best man for the job due to his ancestry from the Mura tribe and 40 years of army service in the Amazon, where he was in close contact with indigenous tribes.[xviii] However, the indigenous rights group Articulação dos Povos Indígenas do Brasil (Apib) “vehemently opposed” the appointment, calling the PSC “anti-indigenous” and stating that having an army general as the head of Funai is promoting “a neoliberal, pro-development agenda” that ignores indigenous rights.[xix] Ribeiro de Freitas was nominated for president of Funai in January, but was turned down after a series of protests from indigenous groups.[xx]

Ribeiro de Freitas is replacing Antônio Costa, a member of PSC who had pledged to not allow his political affiliations affect his performance as president of Funai.[xxi] Costa was fired by the former Justice Minister Osmar Serraglio, a member of the PMDB and ruralistas, after only five months on the job.[xxii] During his time as president of the Funai, Costa stayed true to his words and often resisted the government, who he felt backed pro-agribusiness agendas at the expense of indigenous groups.[xxiii] Tellingly, Costa refused to appoint 20 PSC-backed officials to various positions in Funai because he felt they were unqualified.[xxiv] He justified his decisions by stating, “I could never let people enter the institution who did not show any interest in indigenous causes.”[xxv] However, the ruralistas saw Costa as an impediment to their economic agenda, and, according to Serraglio, Costa was fired because Funai needs “better management.”[xxvi]

In 2016, under President Michel Temer’s federal spending cap, Funai lost 44 percent of its funding and 300 employees.[xxvii] Costa blamed this cut for impeding the success of mandates to protect the rights of over 300 indigenous groups.[xxviii] The downsizing of Funai also caught the attention of the United Nations Permanent Forum on Indigenous Issues (UNPFII), which questioned Brazil’s commitment to indigenous rights after the budget cut.[xxix] In April, Funai employees wrote to the government, emphasizing the need for adequate funding and its role as the only federal institution that can take “direct and exclusive action for indigenous people.” [xxx] Costa claimed that Funai was left powerless with the budget cut and that he was fired for defending indigenous rights.[xxxi]

When Funai was created in 1967, under the military dictatorship, it acted to enforce an “assimilationist perspective” that focused on promoting economic progress.[xxxii] Since its reform in 2009, during the Lula administration[xxxiii], Funai has acted to protect and give indigenous groups in Brazil a strong voice in government; in particular, many natives look to Funai for advice on how to live and adapt to the nation’s economic development.[xxxiv]

A congressional commission, led by the ruralistas, is currently lobbying to expand the budget cuts and eliminate Funai.[xxxv] Additionally, there are two bills in congress that could undermine indigenous rights to their traditional land.[xxxvi] One of these bills seeks to liberalize mining on indigenous land, and the other, PEC 215, calls for a redefinition of indigenous territory.[xxxvii] PEC 215 would allow legislators to decide where boundaries are drawn, which would make it easier for landowners and businesses to evict native groups.[xxxviii] Indigenous lands account for 12.2 percent of Brazilian territory, and the removal of Funai would leave such groups unprotected from farmers who hope to further encroach on the Amazon rainforest.[xxxix] Reducing protections to the Amazon would also likely increase crime rates, as illegal loggers would move into the area to capitalize on the deregulation of valuable raw materials.[xl] While Temer recently vetoed a bill reducing protections to the Amazon forest, his budgetary cuts to Funai and the appointment of a new justice minister who is pro-agribusiness highlight his indifference to indigenous rights.[xli]

On May 28, Temer appointed Torquato Jardim as Justice Minister, replacing Serraglio.[xlii] Temer gave no explanation for this appointment, and Jardim’s pro-agribusiness interests worry natives. Jardim believes indigenous people should be “assimilated with civil society,” and that Brazil needs “to find a technological feasibility for [indigenous] land.”[xliii] The natives do not want to “commercialize their lands,” but Jardim speaks of the “need to make the land useful.”[xliv] Indigenous leaders have spoken out against Jardim, claiming that if he moves to commercialize their land, tribes will “mark their land with their own hands.”[xlv] The natives do not want riches, nor do they want to produce on large scales, but the government has preconceived ideas of what the community wants.[xlvi]

To demonstrate their struggles to the government, indigenous leaders have led protests in Brasília and given presentations before the Ministry of Justice in attempts to safeguard their rights. Francisco, leader of the Kaingang people of Southern Brazil, stated that the “death of Funai would be a sort of genocide,” as indigenous people have relied on Funai for advice  on how to live within the rapidly changing country.[xlvii] Francisco and many other indigenous leaders believe that “lawmakers represent the interests of agribusiness, not our interests.”[xlviii] When presenting before the Ministry of Justice, tribe leaders emphasize their experiences of abuse and the importance of upholding traditional land boundaries.[xlix] Xaerru Pataxó, of the Caciana village in Porto Seguro, Bahia, stated “our people are dying due to lack of assistance, for lack of responsibility from Sesai [Secretária Especial de Saúde Indígena].”[l] Sesai stands to protect the health of indigenous peoples, but with Temer’s budgetary cuts and with the lack of government support, the natives are not receiving the attention that they need.

On April 25, around 4,000 indigenous peoples protested in Brasília against farmers’ encroachment on their lands and the legislation in congress aimed to alter territorial boundaries.[li] The protest turned violent when police blocked protesters from climbing a ramp that led into the congressional building.[lii] Officers were quick to fire rubber bullets and tear gas, while protestors shot arrows.[liii] While some protesters suffered light injuries, no one was significantly hurt.[liv] Police say marchers went beyond the agreed upon point and invaded congressional grounds; nevertheless, according to the coordinator of the march, Sonia Guajajara, the “violent police response was nothing compared to that suffered by indigenous people in territories where deadly clashes continue over disputed lands.”[lv]

Indigenous Brazilians have had a long history of fighting for their rights and land. The federal government, obsessed with achieving high economic growth for Brazil, has seen indigenous land as unused space for expansion. Today, the struggle between the natives and the government is complicated and resembles the conflicts that existed during the military dictatorship. While environmental protections, such as the Paris Agreement which Temer has supported, have prevented use of many indigenous lands for agricultural purposes, the ruralistas are influential in government and are pressing their interests. Furthermore, Temer’s austerity measures have reduced funding to government agencies aimed at protecting the indigenous population, allowing fewer regulations for miners and loggers who seek to take control of native lands.[lvi] Decreased federal supervision has allowed for a rise in indigenous homicides as, in the first five months of this year, there were 37 deaths caused by land disputes, compared to 8 in the same period last year.[lvii] The recent rise in violent land disputes and the appointment of a military general to the head of Funai, threatens a return of military-era ruralista dominance over indigenous land. With Brazil’s government consumed with corruption scandals and focused on economic recovery, natives are left open to violence and have resorted to protests and presentations to save their lands. Brazil’s indigenous population needs Funai to protect and support them, but this will not occur under the limited funding and command of a military general.