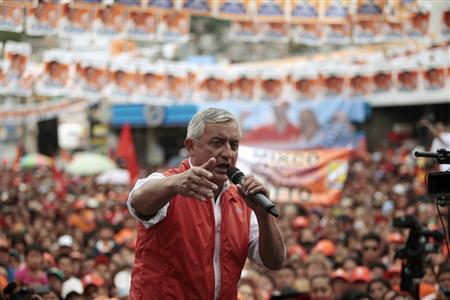 In a rare push to promote indigenous rights in his country, outgoing Guatemalan President Álvaro Colom promised during his campaign to create a government that would seek to unite the ethnically and culturally diverse nation. Following his 2007 electoral victory, he announced, “My objective is to convert Guatemala into a social-democratic country with a Mayan face, with a corn tamale scent, and with the natural beauty that God gave us. It will be a pure Guatemalan social democracy that strengthens the nation’s unity and identity.”[1] But the level of violence in Guatemala has since suffocated such rhetoric; the country today has the seventh highest rate of violent deaths in the world.[2] In what will undoubtedly be a dramatic political shift from moderate left to hard right, Otto Pérez Molina will take over as president on January 14, 2012. The new administration can either keep up with the progress being made on peacemaking and reconciliation in the areas of indigenous and human rights or all but dismiss the issue as it tackles Guatemala’s notorious security problem.

Voted into office due to wide support from the rural indigenous population (he lost in Guatemala City), President Colom at first made a concerted effort to investigate human rights abuses. This is a central issue in a country that endured a horrific internal armed conflict from 1960 to 1996 in which about 200,000 people—mostly indigenous civilians—were killed.[3] His successor, ex-General Pérez Molina, was voted in by a populace extremely preoccupied with the government’s inability to provide personal security, especially in urban areas. While his policies may help to alleviate the current security crisis, many fear that Pérez Molina’s professional background and alleged connection to human rights abuses during the country’s internal conflict will dissuade him from taking a hard line on impunity so as not to implicate his military peers in any criminal actions committed over the decades. Additionally, the many mineral extraction and mining sites that have been established in Guatemala over the past decade could become a serious source of conflict between the government and the indigenous populations, if not dealt with appropriately. The decisions made regarding these two crucial issues will determine if the new president’s ties to the military and his administration’s efforts to increase foreign investment will necessarily infringe on democratic values or impede the advancement of basic human rights, which is of central importance to the indigenous movement.

Human Rights in Guatemala: Slow yet Steady Progress, For Now

President Colom has been considered unique for at least verbally prioritizing human rights. In an interview with COHA, Director of the Guatemalan Human Rights Commission Kelsey Alford-Jones explained that Colom “came into office claiming that he was going to represent indigenous peoples and that he was going to have a government with a Mayan face.”[4] Over half of Guatemala’s population is comprised of indigenous Mayans, who were the primary targets of human rights violations during the internal armed conflict, during which time a reported 93 percent of war crimes were committed by military and associated paramilitary forces.[5]

Efforts to bring the perpetrators to justice have gained some momentum, due largely to the work of Attorney General Claudia Paz y Paz, appointed by Colom in December 2010 in one of his most audacious moves.[6] Since her appointment, she has made an effort to work closely with the International Commission against Impunity in Guatemala (CICIG). Her office played an integral role in arresting forty members of the Zetas drug cartel who were connected to the murder of Allan Stowlinsky Vidaurre (a prosecutor from Cobán) and 27 farmers, along with detaining three suspects who were allegedly involved in the murder of two mayoral candidates in Guatemala City.[7] With this and several other successful convictions of high-ranking military officials, Guatemala appears to be slowly establishing a precedent of accountability for future political and military leaders.[8]

Unfortunately, the current administration has come into conflict with many sectors of the indigenous population that continue to fight for their territorial rights. Guatemala’s flourishing extractive industries have encroached on indigenous territory, yet little has been done to rectify this type of violation. Activists have been ignored, threatened, and arrested for defending their land.[9] Alford-Jones explains that such groups have been “highly critical of the way that [President Colom] has used criminalization and militarization to clamp down on community movements.”[10] Indigenous Mayans have been constantly fighting for their rights on a broad range of topics, including cultural and political autonomy, but their demands as well as their status continue to be marginalized in the national decision-making process.

The once mutually supportive relationship between Guatemala’s indigenous population and the Colom administration has become increasingly soured by the government’s approval of exploitative mining licenses for transnational companies and mega-projects that have seriously infringed upon indigenous land rights. Under current conditions, there is little hope that the incoming government possesses the political will to prioritize indigenous rights over resource extraction projects. Program associate Amanda Kistler of the Center for International Environmental Law has observed that the peaceful coexistence of the nation’s rural indigenous alongside these land-intensive operations would be “extremely complicated” in Guatemala because “there’s so much distrust. Thus far, neither the government nor [transnational mining] companies have made good faith efforts to adequately consult people who would be affected. The question of whether or not a project should move forward is not on the table, so it is hard to imagine a peaceful harmony between companies and affected communities if Guatemala continues to prioritize profits over people.”[11] If this trend continues, it will likely lead to significant tensions between the indigenous and the government. In an interview with COHA, former Guatemalan President Vinicio Cerezo explained, “Relations between the indigenous movement and the current administration were very good at first, but since there has been no progress on renegotiating the agreements regarding mining operations, and since [indigenous peoples] were not given greater participation, this has distanced the indigenous movement from the government.”[12] Cerezo also speculated that “if the incoming administration does not change the current status quo in mining and…regulate land use, this will probably give way to social ruptures that bring the indigenous movement and the government into conflict.”[13] Determining how to balance economic development while simultaneously respecting indigenous rights will be a central challenge for the incoming administration.

In Guatemala there are currently 395 active mining licenses, although the mining sector contributes less than one percent of the country’s GDP.[14] Many are concerned that Pérez Molina’s iron-fist mentality will not be limited to decisions on security, and could preclude any meaningful consultation with indigenous groups on issues pertaining to the mining industry and multinationals’ use of native land. According to Kistler, “It’s a serious concern that the President-elect is a man who has a background in military leadership, whose political appointees will include many military or ex-military, and who will analyze how to exert control and implement change through that specific strategic lens;” therefore, meaningful consultation on development projects could help to relieve this doubt. [15]

A Possible Move toward Ending Impunity

Outside the realm of economic development, Pérez Molina’s attitude toward investigating human rights abuses and ending impunity for former military officials who committed them will greatly impact how he is perceived by both Guatemalans and the international community. Though his critics suggest that his military background will motivate him to neglect or discredit human rights investigations, Pérez Molina has made several comments suggesting that he will not attempt to disrupt the work of the country’s Public Prosecutor’s Office by forcing Attorney General Paz y Paz out of her post. A senior official at an NGO whose organization worked closely with Guatemala during the general elections believes that he will keep this promise— “I don’t think he’s going to [remove Attorney General Paz y Paz], I think he’s going to be smarter than that…This week he said, based on her performance, that she’s going to remain in her post. That’s a good sign that things aren’t going to change dramatically.”[16] By retaining her and allowing for freedom of action, Pérez Molina could go a long way to gain the credibility that he lacks in other areas of Guatemala’s national life.

It remains to be seen whether or not Pérez Molina has the political will (or, perhaps more pertinently, the political need) to support the indigenous movement. Nevertheless, it could be beneficial to the President-elect to present himself as an advocate for human rights, especially since three human rights defenders filed an allegation letter on July 6, 2011 against him with Juan Méndez, the United Nations Special Rapporteur on Torture.[17] Whatever the outcome, his association with the armed forces undoubtedly has marred his reputation, and supporting the work of the Attorney General’s Office could sway public opinion back in his favor.

Looking Forward: Mano Dura and the Fate of Civil Liberties

With 75 percent of Guatemalans living below the poverty line, the most pressing challenges the incoming president faces are poverty, violence, and a number of other debilitating social issues, such as racism and a lack of access to education and healthcare.[18] However, Alford-Jones predicts that “all these issues will likely be pushed off the national agenda due to [Pérez Molina’s] focus on fighting organized crime.”[19] Additionally, many fear that the President-elect is likely to put his country’s democratic institutions at risk by restoring the controversial mano dura style of governance, which allows members of law enforcement to disregard civil liberties in their efforts to eradicate criminal activity. Another high-level observer of the elections spoke of the danger in suppressing certain civilian freedoms in order to increase security— “In the ’80s, the going paradigm was more democracy in exchange for less communism, and today we just cannot have it be more security regardless of the implications for democracy.”[20]

Before Colom was elected, there had not been a left-leaning president in office since Jacobo Árbenz Guzmán (1951-54), nearly 60 years ago.[21] Now, as evidenced by Guatemala’s return to the right, security has proven to be the country’s number-one concern, but there are a number of other important challenges that cannot be ignored, especially those affecting the indigenous people. Ties between the government and the indigenous movement can be strengthened only if Pérez Molina follows through on his promise to support the work of the Attorney General’s Office, and if he demonstrates the will to consult with rural indigenous populations on projects that involve land development or resource extraction. The international community will certainly be shining a spotlight on Guatemala’s incoming president to determine whether he can align a greater military presence with the country’s desire to respect both indigenous and, more broadly, human rights.