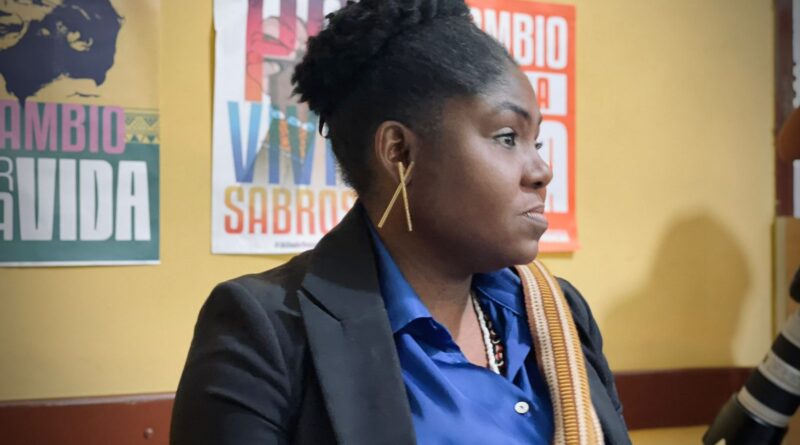 Editor’s note: On May 29, presidential elections will be held in Colombia in an intensely polarized political context. In this interview, held on May 27, vice presidential candidate for the Historic Pact (Pacto Historico), Francia Márquez, shares her motivation and vision for advancing the generations-long struggle of the Colombian people for dignity and justice.

Question: Francia Márquez, what is the first change you plan to implement as a Black woman if you become Vice-President?

Answer: I am not only a Black woman, I am an Afro-descendant woman who already carries a history of struggle and resistance that did not begin with me. It began with my grandfathers and grandmothers many years ago when we were brought here to this continent as slaves. My people have been fighting for freedom and dignity ever since then. And our struggle today to hold political office, to hold state power, is a continuation of that historical struggle. It is the struggle of the Colombian peoples, the social movements that have historically wanted a change in this country, but who have been killed for that, who have been murdered for that, who have been treated violently, who have been banished and even expelled from this country.

We embody the struggle of a long-suffering people, the Colombian people, who have suffered tremendously from racism, exclusion, and the imposition of an economic model that was sold to us as development, but in fact took us down an impossible path for our society, which has resulted in Colombians murdering Colombians through a war that still rages on. So we represent the voices of the grandmothers who wanted a change for this country. Many died waiting for this change. Others now say: ‘I thought I would die and would not live to see the change.’ So we are engaged in a struggle for dignity and justice for our people, of men and women who have historically fought for equality, for peace, for social justice, for human dignity and justice for our people. We have struggled to care for our land as a space for life, the big home, the greater womb.

This is what I represent today, but it is not an individual endeavor. It is not that Francia Márquez appeared a year ago to say she wanted to be president; no, these are long-standing demands. In some way, my presence in politics today is also an act of racial justice for a people who have been denied and erased from politics, who were never allowed to participate in politics.

It is also part of the struggle for gender justice in our country, since a majority of us are women. In Colombia, we women make up 52% of the population, but still, femicide does not stop. Sexual and gender-based violence every day does not stop. Girls and boys are murdered in this country every day. But the worst thing is that many moms like me—heads of household—have to bury their children because they die of hunger and malnutrition in the country with the second highest level of biodiversity on the planet.

We have everything needed to live well and with dignity, but there is greed and corruption. Ours is also one of the most corrupt countries in the world, and there is unequal access to our biodiversity, and thus to the potential of our people. Our people are fighters. When we fall, we get back up, with our heads held high to keep moving forward. So that is who we are.

The fact that I am here today, holds great significance. I have walked this path hand-in-hand with Alexander López, the national senator who knew me as a very little girl, and Carlos Rosero, who taught me to see myself as a Black woman and to be proud of my blackness and to be proud of our Black people. To not feel shame over the burden of slavery and colonization.

We are people who want to change this country, and we hope the change will come in the first round two days from now. At this stage I have a lot of tingling in my stomach, as I also face the challenge of doing things well and with transparency. I thank you and the international media, and Latin America united for a just, social cause, for being here to cover this election. We hope it will take place in an atmosphere of calm, with lots of love, with lots of joy, and that it will be a festival of democracy.

Question: Could you speak a bit more about the issue of territory? How can one transform the relationship to land or territories when so many interests are involved, such as the mining companies? What will this change in model look like nationally?

Answer: We are going to transform the model of development that enslaved my people. The Black people who were brought to Latin America (particularly Colombia), were brought to work as slaves on the plantations and in the mines. The extractivist economic model enslaved my grandfathers and grandmothers.

Transforming that model is the path to freedom. Today that model of development is exhausting life on earth, it is extinguishing life every day. Humanity believed that we owned the planet, but the pandemic made us realize that we are not the owners of anything. We are simply another link in the chain of life.

We must have territory to express ourselves as ethnic, indigenous, and Afro-descendant people, Raizal and Palenquero people. Peasant farmers are nothing without their land. We need our land to produce food and to produce seeds. Our territories are also where water is born, without which human life is not possible, without which no life is possible.

So when we talk about care for the land as a space for life, it is because hegemonic, patriarchal, and neoliberal policies perceive land as a space for accumulating wealth—wealth accumulated from the extractivist model. This has led us to the tremendous inequalities we see today, not only in Colombia, but throughout the world.

The environmental crisis the planet is experiencing today, in which we have a responsibility vis-à-vis our children and all who follow us, is the responsibility to repair or mitigate the effects of the environmental crisis. We have 30 years to ensure that our sons and daughters do not have to live through a catastrophe that is worse than what we have experienced in many parts of the planet. In Colombia, we have droughts in some places and famine in others; flooding in some places, and that is evidence of the change here. For example, Bogotá used to be a cold place. Now you come here and you don’t know when it is going to be cold and when it is going to be hot. You don’t know. The climate has changed and those climate variations affect ecosystems, they affect maritime life and human life.

I did not understand this before, but my grandparents taught me starting when I was very little. My grandparents did not know how to read or write, but they taught me about the relationship we need to have with our land, what our relationship should be with our crops and how we should farm. That popular wisdom was there. But others said, “those ignorant people, they are tied to the old ways and do not want progress or development.” But my grandparents were right and today the UN and many scientists agree and say that is the challenge that humanity now faces.

Question: Outside Colombia people are not really aware of the meaning of “Vivir Sabroso” (living the good life).

Answer: Well, we have tried Vivir Sabroso here. This was part of the vernacular used in our community, it was an everyday phrase that we brought into the political realm. The elites have tried to pervert it into something else. They say that “vivir sabroso” means we are going to be lazy and that we want everything to be given to us without working for it. That is not it. For our people, Vivir Sabroso means living in community, living in a collective construction of seeing ourselves as an extended family. It means living with nature and acknowledging that we are part of it and live in harmony with it if we as a people establish rules for our relationship with nature. Vivir Sabroso means the end of war in this country. It means to live without fear, that we women can go down to the corner without fear of being raped or killed. That young people will not have their eyes shot out because they are demanding education in this country.

To live without fear is to live with rights, to live in peace, to live with joy; to be able to express oneself through art, culture, and sports. It is to be able to enjoy the rich biodiversity we have in this country. That is what Vivir Sabroso means. And we have enjoyed this in the Pacific coast region of Colombia when we play the marimba, when we go and drink “bichi” and begin to talk about ourselves.

When we prepare a plate of food with products from our territory, when we can go and throw a net to catch a fish… this means we do not have to have money to be able to eat. It means living with the door open, that you do not feel that you have to be locked inside all the time. It means to live in freedom, and that freedom, well, the political and social leaders of this country have lost the ability to live freely. They always have to go around with armed guards because our country has become unsafe, not only for us, but for all Colombians. No one enjoys security in this country today.

This interview was made possible by Global Exchange, which is sponsoring an international team of journalists, together with its partners at Peninsula 360 Press in Redwood City, California, to provide intensive coverage of both rounds of the election (if there is more than one)– in both Spanish and English. Council on Hemispheric Affairs (COHA) Senior Fellow, Alina Duarte, is part of this international team of journalists.

For the complete video of the interview in the original Spanish, see “Entrevistamos a Francia Márquez, candidata a vicepresidencia de Colombia por el Pacto Histórico“.