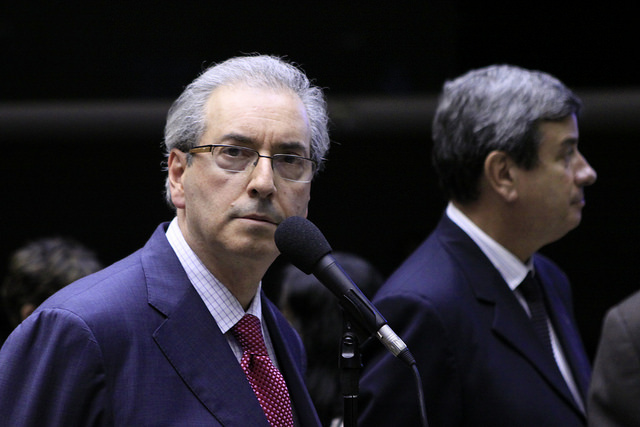 By Aline Piva, Research Fellow and Laura Sholtz, Research Associate at the Council on Hemispheric Affairs

On September 12, in an overwhelming vote of 450 to 10, the Brazilian House of Representatives officially stripped Eduardo Cunha of his elected position and the immunity it granted to him as a member of Congress. He was formally convicted of lying during his testimony in the House when he denied the existence of personal offshore bank accounts. There are also allegations that he is linked to the ongoing Lava Jato scandal that is currently under investigation by federal prosecutors. Cunha had served as Speaker of the House since 2015, and is now ineligible for election until January 2027.[i]

The voting puts an end to a process that had dragged on for eleven months. Swiss authorities first provided evidence that Cunha held undeclared bank accounts in the country in September 2015, which proved that he had lied under oath. As a response, the Socialism and Liberty Party (PSOL, Partido Socialismo e Liberdade) and the Sustainability Network Party (Rede Sustentabilidade) filed a motion against him on October 13, 2015, calling for his removal for breaching parliamentary conduct rules. On December 3, 2015, just hours after Rousseff’s Workers Party announced that it would vote against Cunha at his Board of Ethics hearing, the former Speaker of the House moved to begin proceedings to impeach Rousseff.[ii] The impeachment process, which largely originated from Cunha’s political vendetta, has been widely criticized for its political motivations.[iii]

Although Cunha’s removal may reflect a rapid loss of support even from members of his own party and those who supported Rousseff’s impeachment, Cunha’s removal may also be understood as a political “sacrifice” by the Temer administration to establish its claim to political legitimacy. Despite Temer’s official “anti-corruption” rhetoric, Cunha’s removal actually helps divert attention away from evidence linking Temer—and much of his cabinet—to ongoing political corruption scandals. In the short term, his removal also seeks to demobilize some of the country-wide protests against both President Temer and the corrupt political class. Observers are still concerned about the extent to which other officials linked to corruption scandals will be punished. Will prosecutors continue to pursue those close to Temer, including members of his cabinet, now that Cunha has been removed? By assuming Brazil’s presidency, Temer has already achieved immunity for himself and will presumably work diligently to protect those closest to him as he tries to govern.

In a less publicized piece of news, Temer personally fired Brazilian prosecutor Fábio Medina Osório by phone just a couple of days before Cunha’s impeachment. Medina was one of many prosecutors working on the Lava Jato investigation, but he claims that he was fired for trying to obtain information that could have implicated some of Temer’s closest allies.[iv] The suspicion that Medina’s removal was a strategic move to shield persons of interest from investigation was further corroborated September 6 when Temer’s allies prevented Medina from speaking in the Brazilian House of Representatives. Medina was scheduled to give details of interference from Temer and Temer’s Chief of Staff, Eliseu Padilha, who were trying to prevent him from gathering further evidence for the Lava Jato Operation.[v]

The Temer administration officially maintains that Medina’s dismissal stems from a “misunderstanding,” but the unspecific justification and convenient timing of Medina’s firing seriously calls into question the government’s commitment to anti-corruption investigations. This is not the first time that actions from Temer’s government to prevent corruption investigations have been revealed. In May, Temer’s former Planning Minister Romero Jucá was recorded speaking of a “pact” to shield politicians against the Lava Jato investigations. Jucá suggested that members of Temer’s party should “change the government to stop the bleeding” from corruption investigations and that “the easiest solution would be to put Michel [Temer into power],” making it clear that Temer’s associates have considered trying to stop Lava Jato in the past.[vi]

Cunha has already expressed betrayal by Temer’s government and used his first interview after being removed from office to show that he still retains the political leverage to delegitimize Temer’s inner circle. In his interview with the Brazilian newspaper Estadão, Cunha accused Moreira Franco, Secretary of the Investment Partnership Program (Programa de Parcerias de Investimentos, PPI) and one of the strongest members of the Temer Administration, of masterminding the financial irregularities scheme during the construction of the Maravilha Port in Rio de Janeiro. Moreira is currently in charge of Temer’s “concession plan” to privatize various public works and to attract foreign investment, although Cunha has criticized the plan’s legitimacy. He specifically said that the concession plan had been “born under suspicion” because of Moreira’s links to the Maravilha Port project corruption.[vii]

Cunha’s impeachment puts an end to the longest political trial in Brazilian history. But even with this rousing defeat, Cunha remains a powerful politician and could easily retaliate against those who voted him out of office. He is currently negotiating a plea bargain that may provide evidence of corruption of more than 30 current politicians, including Temer, who had long been considered one of Cunha’s closest associates.[viii] Just a few days before he was officially striped of his mandate, Cunha sent a messenger to Temer’s official residence. According to Lauro Jardim, a famous Brazilian right-wing journalist who reported the encounter, what Temer heard can be summarized in a parable: “Eduardo said to me: ‘once upon a time, there were five friends that did everything together, they traveled [and] they did business… Then one of them became president, three others became ministers and the last one was abandoned’… And this will not stand.”[ix] If Cunha fulfills his threats of retaliation, he may be just the first of any number of politicians to fall.

By Aline Piva, Research Fellow and Laura Sholtz, Research Associate at the Council on Hemispheric Affairs