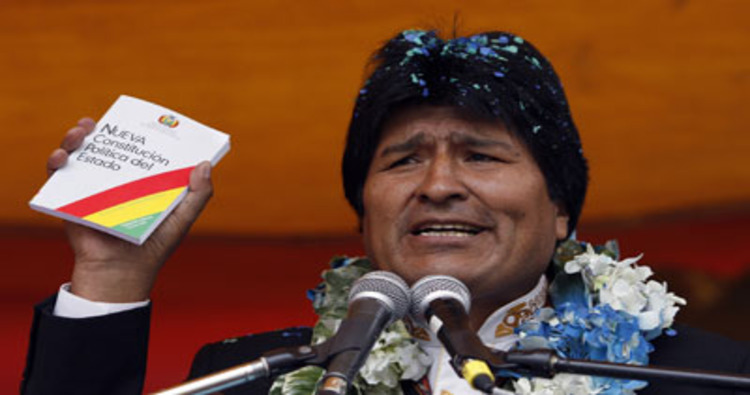 By: Ryan Eustace, Research Associate at the Council on Hemispheric Affairs

Many Latin American countries have a dangerous propensity to replace their constitutions. This is not to say that founding documents should be unalterable, as often, they must be updated to reflect the changing ideals and interests of a country over time. Yet countries should change these texts sparingly, as constitutions provide the foundation of the state and ensure the continuity of its institutions. The state and its institutions need to be perceived as lasting because they organize the conflict inherent to civilization in a theoretically more peaceful, equitable, and sustainable fashion. Frequent replacement of constitutions undermines this continuity. However, a disturbing trend of constitutional change has colored the political history of many Latin American countries.

The four countries in the world that have had the most constitutions since their founding are all in Latin America and the Caribbean. The Dominican Republic tops the list with 32, followed by Venezuela with 26, Haiti with 24, and Ecuador with 20. [1] In Western Europe the average lifespan for a constitution is 77 years, while in Latin America it is 16.5. These statistics paint a more vivid picture when understood in the context of the frequency of coups in both regions. Since the end of World War II, Latin America has experienced 48 coups, while Europe has experienced somewhere between 6-10, depending on the definition of coup that was used. Thus, high constitutional turnover also indicates political instability. [2] In democracies, the more changeable the rules are, the more dangerous and unpredictable the game is for all involved. A constitution ensures the rules are predictable. If those rules are constantly changing, not only is it difficult for citizens to plan and invest for the future, but it also undermines trust in the democratic process.

Arguably, the most important of these power-diffusing institutions is a body responsible for constitutional adjudication, such as a supreme court. The ability to alter a constitution cannot be undervalued, whether through an amendment process or through reinterpretation by an adjudicating body. This process allows a constitution to reflect the changing values and ideals of modern society. If the process of alteration is limited and too difficult, a constitution is more likely to be thrown out rather then amended.

Out of all Latin American countries, only Bolivia’s and Chile’s bodies of constitutional adjudication predominantly produce erga omnes effects, whereas other countries’ bodies, both currently and historically, produce inter partes effects [6]. In contrast, all the typical Western exemplars of constitutional stability have adjudicating bodies that produce predominantly erga omnes effects. Therefore, having a constitutional adjudicating body is not enough. It also must be capable of meaningfully altering the constitution. If not, its rigidity could be its downfall. This has been a common problem throughout Latin American history.

Madison was correct that institutions affect the durability of a constitution. However, his analysis overlooks a more basic factor influencing constitutional turnover: the length of the document itself. During the writing of the U.S. constitution, Madison favored a very minimalist document that merely specified government responsibility. It was only at the vehement protest of the Anti-Federalists, who feared that constitutional brevity would lead the federal government to encroach on state and individual sovereignty, that the Bill of Rights was included. [7] This compromise ultimately contributed to a very stable constitution.

Furthermore, increasingly long constitutions correlate with both higher levels of corruption and lower GDP. As the number of rules, restrictions, and bureaucracies necessary to enforce constitutional rights increases, citizens, businesses, and political actors attempt to get around these rules by engaging in rent-seeking behavior, which can lead to corruption. Restrictions also hamper the creation of robust and adaptable economies, thereby reducing GDP. Common economic constitutional mandates in the region include the establishment of state monopolies, the enshrining of regulations with short-lived relevancy, and barriers to trade that often fall out of favor over time. These structures often hinder growth. In order to amend these structures, which are often numerous, a political challenge is presented that makes it difficult to engage in needed economic reform. Because constitutional amendments require very large majorities, corralling all of these votes to affect change is an arduous process. This difficulty can contribute to harming GDP as growth-hindering elements of a constitution go un-amended. [9] Though the causal nature of this relationship remains unclear and merits further study, the fact remains that there is a very real relationship between constitutional turnover, GDP, and corruption.

The Political Outcomes of Fluid Constitutions

One of the most visible side effects of Latin America’s high constitutional turnover is hyper-presidentialism. As Latin American historian Marshall C. Eakin explains, “North Americans have historically delegated power to their leaders, [while] Latin Americans up to the present still prefer to deliver power to their leaders.” [10] This relationship between the people and the executive is one of the lasting legacies of the Creole elite who framed the region’s constitutions and shaped its political culture. Hyper-presidency in Latin America has come to mean that whoever wins the election is entitled to govern as he or she sees fit, with the only constraints to power being the current political landscape and constitutional term limits. In practice, however, even established power relations and term limits often cannot curb the power of the executive. [11]

Many constitutional rewrites in Latin America since 1900 have significantly increased executive power. This occurred in Uruguay in 1934 and 1966, in Ecuador in 1996 and 1998, and in Venezuela in1999. The list of recent expansions of executive power has been particularly troubling. In 2014 Daniel Ortega of Nicaragua did away with term limits; Hugo Chavez did the same in Venezuela in 2008. In 2013, the constitutional court in Bolivia ruled that Evo Morales could run for a third term, despite the constitutional limit of two terms. Many argued this was evidence that the judiciary was too easily influenced by executive power. This has not been the only complaint concerning judiciary independence. As early as 2011, Correa pushed to involve the executive in appointing judges and further reduce the independence of the judiciary in Ecuador [12]. Frequently, the president who enacted the reform remained in office to enjoy the expanded authority, a situation far too common where one man manipulates the constitution and the legacy of the caudillo continues.

Hyper-presidentialism not only threatens democracy in the form of electoral autocracy, it also raises the likelihood of political instability. With so much power concentrated in the executive, popular support and discontent are focused disproportionately on this branch. Recent coups and coup attempts, such as the 2010 police kidnapping of Rafael Correa, the 2009 ousting of Manuel Zelaya, and the April 2002 coup that briefly ousted Hugo Chavez, are evidence of this. In addition to enjoying cults of personality, these leaders were also the focal points of discontent. [13] With executive ability to lengthen terms or to increase their powers, there is no incentive for the opposition to wait patiently for the next election that may never come, thus perversely incentivizing political instability. This is all a result of the exceedingly malleable nature of constitutions in Latin America. With constitutional politics operating under the same rules as regular politics and the president holding most of the cards in the political game, the president can change the constitution with extraordinary ease.

This trend manifests itself clearly in the differences between Chile and the Dominican Republic. While there are several variables that would produce vastly different outcomes in both countries, examining their different approaches to constitutionality offers an interesting picture. Chile has had between 7 and 11 constitutions since its founding in 1810, but most were in the turbulent years after its founding, and since 1833 it has had only 3. Furthermore, Chile is among the least corrupt and, as measured by GDP per capita, the richest countries in Latin America. This makes sense as, stated earlier, there is a correlation of low constitutional replacement with higher GDP and lower corruption. Conversely, the Dominican Republic, founded in 1844, has had the most constitutions in the world at 32 and the remains among the poorest and most corrupt countries in Latin America [14].

When the rules of the game are frequently changed there is little faith in many of the laws of the day. There are few things that are more poisonous to a democracy. Constitutional instability is naturally harmful to prosperity and good government because it indicates that the foundations of the state are not foundations at all, but subject to political whims. Such foundations are necessary for prosperity because it allows for politically impervious and predictable laws. In the absence of these things, there is poor growth and bad governance. Comparing these two examples offers a vivid lesson that constitutional turnover is a major factor influencing the well being of a country. In the long run, it is constitutional stability and continuity that fosters an environment that encourages good governance and economic growth.

Latin America is stuck in a vicious cycle, where the malleability of constitutions facilitates hyper-presidentialism. This system is difficult to change because doing so requires executive action that is not incentivized. However, not all Latin American presidents seek to alter their constitutions to further their own power. Michelle Bachelet and Ricardo Lagos in Chile, Luiz Inácio Lula da Silva in Brazil, and Tabaré Vásquez in Uruguay all ended their terms with high popularity and did not seek to alter the constitution to remain in power. Lula captured a theme that Latin America must embrace when he said, “When a political leader starts thinking that he is indispensable and that he cannot be substituted, a small dictatorship is born.” [15] The recent reforms to Latin American constitutions that enshrine human rights, ecological protections, indigenous rights, and political equity are all admirable additions and should be lessons to the world. Nevertheless, the nature of constitutional politics in Latin America remains a priority for reform. Greater respect for separation of powers will be necessary to facilitate power diffusion away from the executive and to engender shorter and less specific constitutions. One person should not be the state, constitutions should not be a political tool, and the foundation of a country must be above politics.

[14] Institute of Developing Economies, Constitutions Around the World: The View from Latin America, Jose Louis Cordiero, Discussion Paper No. 164, 2008