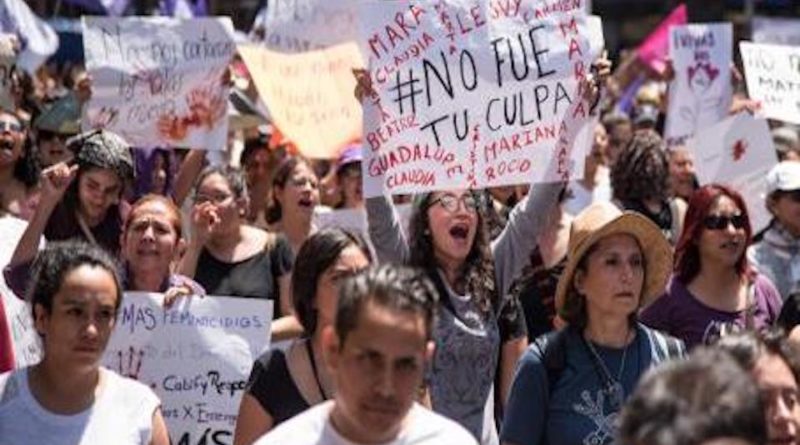 It seemed like any other day in the life of a 19-year old girl. On September 8, Mara Fernanda Castilla, a political science student had just been enjoying a night out with friends in the college town of Cholula, in the central state of Puebla. At around 5 am, she decided to use a Cabify car, a ride-sharing platform popular in Latin America, to get home safely. However, she never made it home and was reported missing by her sister a few hours later[i]. Following a week of investigations, the local Public Prosecutor’s Office announced that Castilla’s body had been found wrapped in a sheet at the bottom of a ravine, in the border between Puebla and Tlaxcala.

The inquiries revealed that Cabify’s driver Ricardo Alexis had allegedly subdued her and took her to a motel, just blocks from Castilla’s home, where he later raped and strangled her.[ii] Security video footage shows that Alexis parked in front of Castilla’s home for several minutes without her exiting the car before heading to the motel.[iii] Her cellphone and clothes were also found at Alexis’ home in a small town in Tlaxcala[iv]. Alexis will now go to trial and if found guilty, he may face up to 85 years in prison; 60 of them for the crime of femicide.[v]

Earlier this year, Castilla had protested the murder of Lesvy Osorio, another university student whose body was found on the National Autonomous University of Mexico (UNAM) campus in Mexico City. Castilla used the trending hashtag #SiMeMatan (if they kill me) on a May 5 tweet that read “#SiMeMatan it’s because I liked to go out at night and drink a lot of beer….”[vi]. Following Lesvy Osorio’s murder the Public Prosecutor’s Office of Mexico City shared through social media, even before the investigations were disclosed, that Osorio was an alcoholic and a drug user who was no longer studying at UNAM, and had been living out of wedlock with her boyfriend.[vii] It was precisely these kind of sexist comments that led #SiMeMatan to become a trending topic on Twitter to protest the use of the victim’s personal life as a way to justify their murder.

The terms femicide refers to a crime involving the violent and deliberate killing of a woman.[viii] Both crimes have caused wide national outrage in a country where over 17,000 women were murdered between 2007 and 2014.[ix] In the state of Puebla alone, 82 femicides have been documented by NGOs so far this year, but only 58 of those crimes have been officially recognized by the state Public Prosecutor’s Office.[x] Feminist groups and other human rights organizations have also denounced that the state of Tlaxcala is home to powerful sex trafficking groups that operate at both national and international levels, which could be involved in this crime.[xi] This is the reason why, on September 17, thousands of women protested all across Mexico to request justice for Mara Castilla, as well as to demand an end to the growing number of gender-related crimes and the apparent indifference at all government levels.

Victim blaming has been a constant in gender-related crimes in Mexico, as the initial response of Mexico City’s authorities after Lesvy Osorio’s murder show. It is not different this time. In an interview following Castilla’s homicide, the president of Madero University in Puebla, Job César Romero said that gender-related crimes were caused by “social decomposition and the current liberties that girls have to go out until very late…because they now have more autonomy to travel alone in their cars or in any other means of transport”.[xii] Social media has been a useful instrument in mobilizing against these crimes; however, it has also served to reveal the misogyny that permeates an important sector of Mexican society where men and women continue to blame the victims for the crimes that befall them.

A relevant question that still remains is whether femicides are a cultural phenomenon or if they are related to a variety of structural aspects such as high levels of impunity and the inability to include a gender-perspective in the killing of women. It can be argued that the normalization of violence against women is still a prevalent characteristic within Mexican society. However, it also seems likely that other factors related to the administration of justice or the lack of gender-inclusive policies are responsible for the increasing number of gender-related crimes in Mexico.

While Mara Castilla’s murder may become an emblematic case in the struggle against femicides, there are still hundreds of female homicides that remain invisible and unpunished. Additionally, the difference in the number of femicides that are reported by civil society organizations and the media, and the ones that are officially recognized by the local and national authorities, reveal at least two issues: the limited communication between the government and society, as well as the inadequacy and reluctance to apply a gender analysis into the investigation of women’s deaths.[xiii]

For example, a significant number of murders of women are initially ruled as homicides.[xiv] Additionally, the indifference and sexist responses from the authorities, who respond that women probably ran away when the families bring their cases to their attention, represent important obstacles for the administration of justice in these cases. Even though Mexico has adopted innovative legislation that punishes gender-related crimes, the fact that several femicides are not considered as such does not help reduce the levels of impunity, nor to reduce the occurrence of these crimes.[xv]

Although the Public Prosecutor’s Office of Puebla is asking for Ricardo Alexis to be charged with femicide, there are still important issues regarding this case that call into question the responsibility of other actors in the continuation of these crimes. It has been revealed that before joining the ride-sharing company Cabify, Alexis had been dismissed from Uber for violating security rules.[xvi] In addition, despite having been detained for gas pipeline theft, Alexis was able to prove that he lacked a criminal record, which he presented to Cabify to fulfil the eligibility requirements.[xvii] Cabify’s operating license has been revoked and there is an increasing distrust of the safety of ride-sharing services, as well as of the companies’ responsibility in the prevention of these horrendous crimes.[xviii]

Facing the overwhelming increase in the number of femicides, civil society groups are demanding specific measures from the government. For instance, in addition to prioritizing the gender perspective and determining where Cabify’s responsibility lies, there is also the request to investigate whether this case can be linked to the human trafficking groups that operate in both Puebla and Tlaxcala.[xix] Moreover, there is a growing demand for the government to declare a gender alert– a mechanism that obliges authorities to implement measures that protect women’s’ rights and carry out in-depth investigations to solve acts of violence against women– at the national level and not only in the city of Puebla.[xx]

The prevalent victim blaming and the number of femicide cases that remain unresolved may not present a very positive panorama for women in Mexico. Gender alerts have been labelled as unhelpful and criticized for not solving the gender-violence problem. However, despite the shortcomings of this legal mechanism, the importance of analysing female homicides from a gender perspective should not be overlooked. It is a way to make authorities more accountable as well as to raise awareness within different societal sectors that a femicide crisis is taking place.

[vii] Amanda Erickson. “A Mexican prosecutor called a murdered woman an alcoholic who was living out of wedlock.” The Washington Post, May 5, 2017. https://www.washingtonpost.com/news/worldviews/wp/2017/05/05/a-mexican-prosecutor-called-a-murdered-woman-an-alcoholic-who-was-living-out-of-wedlock/?utm_term=.b12503b7b5cb .