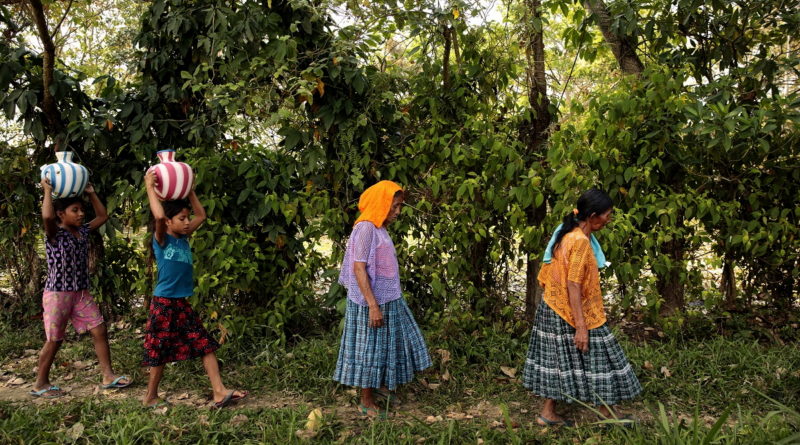 Marc Pilisuk, Jennifer Rountree and Rebecca Ferencik
From Berkeley, CA and Portland, OR

In its attempt to stem a spike in the number of Latin American men, women, and children traveling to the U.S., an unprecedented number of them seeking asylum, the Trump administration has pushed Guatemala and other countries in the region to sign “safe third country” agreements. The U.S. is bound by law to permit those seeking asylum and this new agreement is an attempt by the administration to avoid this obligation by declaring Guatemala as a safe third country, requiring asylum seekers from Honduras and El Salvador to remain in Guatemala.

Signing an agreement declaring Guatemala a “safe” country does not make it so. Increasing drug and gang-related violence and poverty—an estimated 59% of Guatemalans live in poverty, most of whom are indigenous—are not the ingredients of a safe and secure environment. This environment is largely a result of the legacy of more than half a century of U.S. policy, intervention, and corporate interest and its deleterious effect on Guatemala’s people.

In the early 1950s, after decades of colonial rule, Guatemala elected Jacobo Arbenz, a nationalist and socialist who sought to transform oligarchic Guatemalan society through land reform and the development of government-owned enterprises. These government enterprises would be in competition with the American corporations, which at the time, dominated the railroad, electric, and fruit-trade industries. Of these American corporations, the United Fruit Company was the most influential. For decades, the company was the largest landowner, employer, and exporter in Guatemala. With nearly half of its land expropriated by Arbenz’ land reform act, United Fruit Company executives and board members (one of whom was then CIA Director Allen Dulles) appealed to the American government. In 1954, the U.S. government installed a puppet leader, overthrowing Arbenz in a coup, undoing his nationalist policies and setting up a strong-arm government that favored the United Fruit Company and other U.S. corporate interests.

Under U.S. guidance, Guatemala’s powerful military force and network of counterinsurgency surveillance—a program purported to stem the tide of communism in the region—continued for more than three decades. From 1960 through 1996, Guatemala was embroiled in a brutal civil war. The succession of military dictatorships were notorious for their scorched earth methods of destroying entire villages—most of them indigenous Mayan communities—in an effort to root out underground guerilla fighters. Their methods included beheading victims and burning them alive, smashing the heads of children on rocks, and raping women. In the fourteen months of Efraín Ríos Montt’s rule in the early 1980s, 10,000 documented killings or disappearances were reported. Conservative figures estimate that 200,000 people were killed or “disappeared” over the course of the war; 93% of the killings are attributed to the Guatemalan military. The United Nation’s Commission for Historical Clarification declared these deaths as genocide because the vast majority of the war’s victims were indigenous Maya. The 1999 report entitled, “Guatemala: Memory of Silence,” also identifies the U.S. involvement in the country as a key factor which contributed to human rights violations, including the training of Guatemalan officers in counterinsurgency techniques and support for the national intelligence system.

The end of Guatemala’s 36-year civil war did not bring peace. Paramilitary bands, many of whom are employed by U.S. and Canadian corporations, continue to roam the Guatemalan countryside targeting indigenous and worker’s rights groups. Similar to United Fruit Company six decades prior, these corporations determine agricultural productivity and the use of natural resources in Guatemala. Companies such as Tahoe Resources Inc., Goldcorp, and Solway group have come to play a dominant role, removing major areas of agriculture and replacing them with silver, gold, and nickel mines, and with no input from local communities. Severe environmental and health consequences occur in surrounding regions, including water shortages and contamination, air pollution, failing crops, skin rashes, infections, and coughs.

The Guatemalan government aids the corporate interests by suppressing peaceful protestors through intimidation tactics, including utilizing false charges, arrests, and the military. The government has declared states of siege, sending in thousands of heavily-armed soldiers to areas where local farmers and activists have opposed the expansion of mining. Indigenous leaders have played a significant role in speaking out against the loss of communal land for subsistence farming and against the deleterious effects of mining on the soil and water. Many of these leaders have been forced into hiding, and in some cases have been falsely accused of being members of drug cartels or other organized crime groups. Others have been killed for speaking out. In 2018 Guatemala recorded the sharpest rise in the murder of environmental defenders, jumping more than fivefold, making it the deadliest country per capita in the world.

Simultaneously, for many years in the Western Highlands of Guatemala, drug cartels had persuaded poor indigenous farmers to replace their traditional crops with poppies. Then under pressure from the U.S., the Guatemalan government eradicated the poppy fields, inflicting violence in the process. This left farmers with no other similarly-valued replacement crop and no replacement income, nor any form of assistance. For a time, poppy farming brought a level of self-sufficiency to farmers and their families. This loss of revenue added to pressures, increasing the wave of Guatemalans migrating to the U.S. In addition, military crackdowns against illegal drugs led to a level of organized crime, making life more dangerous for those who remained.

In 2007, The UN-backed International Commission against Impunity in Guatemala (CICIG) was created. It came about largely as a result of efforts by students and Mayan leaders, exasperated that attempts to bring perpetrators of the country’s civil war to trial gained no traction in the justice system. The commission supported corruption probes that resulted in the indictment of Guatemala’s former president Otto Perez Molina and vice president Roxana Baldetti and the prosecution of prominent government officials, including members of Congress and the Supreme Court, two former presidents Álvaro Colom and Alfonso Portillo, dozens of corrupt judges, and thousands of corrupt police officers. It also supported the detention of powerful drug traffickers in the country. This year, CICIG’s mandate expired, lacking both the continued support of the United States and the support of Guatemala’s President Jimmy Morales, himself under investigation for corruption. In the absence of the CICIG, already powerful organized crime groups are expanding their influence across the country and deepening their partnerships with government officials, the military, and transnational crime networks. Experts observe that, given the current levels of poverty and inequality, this environment of unfettered corruption will only continue to make the country an inhospitable and unsafe place, where families have more reasons to leave than to stay.

Land not taken over by foreign mining operations has been impacted by climate change. In recent years, the “Dry Corridor,” the tropical dry forest region on the Pacific Coast of Central America which extends from southern Mexico to Panama, has experienced high temperatures, below-average rainfall and periods of drought, resulting in the significant loss of crops—up to 50-75% for large agricultural operations. For families, the loss of crops have translated to a loss of jobs, income, and subsistence, and has pushed more and more families across the region into food insecurity. Guatemala has the fourth-highest rate of chronic malnutrition in the world, with rates as high as 70% among indigenous communities. U.S. Agency for International Development-funded programs, such as Buena Milpa (meaning “good cornfield”), have helped farmers create seed reserves and learn new methods of soil and water conservation. Many of these programs came to a halt earlier this year when the Trump Administration announced it would freeze $450 Million in funding to Guatemala, El Salvador, and Honduras for failure to stop citizens from migrating to the United States. As Latin American experts have pointed out, halting aid may actually increase migration to the U.S., as food insecurity has been one of the primary drivers of migration from Guatemala.

Guatemala is a case of both global dispossession of people and of advocacy for resistance. The U.S. intervention model has failed in Guatemala. It has used a nation rich in natural resources and in cultural tradition as a tool for extractive resources and for cheap labor. It has relied upon coercion to repress dissent over the failure to provide either decent livelihood or safety for most of its people. Organized community resistance led to CICIG, a UN assisted program, which successfully prosecuted some of the most violent and corrupt violators, but the agency has been undermined by withdrawal of U.S. support over the past two years. Despite dehumanizing efforts to turn away immigrants, Guatemalan families have no choice but to face the hazards of migration to find hope within the wealthy country that has devastated their own. Details differ, but the general problem is repeated in Honduras, El Salvador, Colombia, Somalia, and in much of central Africa. People will continue to flee until there is reparation for the lives that have been traumatized, until their contaminated lands are replenished, and until the devastating economies and military strongmen who run them, with U.S. assistance, are replaced. The meta problem reflects a global question about sustainable values. A system that allows exploitation of people and of habitats so that a few may prosper, comes to feel the pressure of dissenters. When such dissenters are met with brutality, many choose to flee to find refuge. But the exodus will continue as an inevitable part of a system that is not sustainable and is morally unsatisfactory. It is a system that would have much to learn from traditional Maya wisdom in which tribes of people and their environmental habitats are considered sacred and worthy of preservation.

Advocacy groups have developed both to assist in the plight of refugees and to provide people with viable means to restore their country of origin as a place to live in dignity. Groups such as Network in Solidarity with the People of Guatemala (NISGUA) https://nisgua.org offer a way to support this effort.

Marc Pilisuk, Ph.D., is a Professor Emeritus at The University of California Davis and Faculty at Saybrook University, Berkeley, California

Jennifer Rountree, Ph.D., is Project Manager at The Center for Outcomes Research and Education, Portland, Oregon